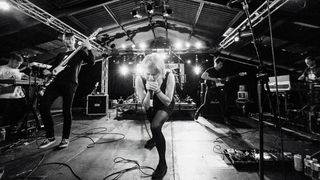 “When you strip everything away, it comes down to me being an obsessive, daft twat about music!” laughs Alex Fitzpatrick, sitting in the Hammer offices sipping his black coffee.

His words could describe many of us, but Alex is reflecting on why he started his own label, Holy Roar. Named after a Torche song, it’s home to some of the most exciting hardcore and metal bands in the UK, including melodic hardcore stalwarts More Than Life, sci-fi doomlords Slabdragger and emotive post-hardcore merchants We Never Learned To Live, and is about to celebrate its 10th birthday with a show headlined by success story Rolo Tomassi – which is no mean feat for an independent label.

The seeds of Holy Roar were planted in the unlikely setting of the Gloucestershire countryside – not somewhere you associate with shapeshifting noise – where Alex grew up. As a teenager, he’d sit in his room, playing PlayStation and buying and consuming as much music as he could from the likes of Korn and Chimaira. When he moved to Birmingham for university in 2001, he started a webzine, put on shows for bands such as Throwdown and Darkest Hour, and released EPs from local bands Sika Redem and Numinor.

Alex also became known for hosting shows at his house, with bands like UKHC mob November Coming Fire and hardcore experimentalists Trencher kicking his front room to pieces. (A young Bring Me The Horizon were also once booked to play, but had to cancel after, er, breaking down on the motorway.)

In 2004, he and his then-girlfriend Ellen moved to London. Her dad loaned them around £8,000 to continue putting on gigs, and the money was eventually invested in launching Holy Roar.

The label’s first signing were Sheffield math-bastards Rolo Tomassi, who Alex knew from one of his house party shows. They did the deal following a show at the Betsey Trotwood in north London, and without a big investor or financial backing, Alex still had to work a day job to keep the Holy Roar dream alive.

“I was buying advertising space and felt like my soul was dying,” he remembers. “When you’re buying quarter-page ads for Lloyds TSB in The Daily Mirror, you’re not feeling that good about yourself!”

He used every spare hour to keep his business moving, and drew inspiration from the visuals of albums released by post-metal/hardcore dealers Undergroove Records and US alternative/metalcore label Robotic Empire. “I felt like no one in the UK was putting effort into the art and packaging,” he says. This made Rolo Tomassi’s first release in 2006 a little more complicated. “The band wanted the sleeves screenprinted by a dude in a screamo band in Italy, so we had to hand-glue every single one!” he laughs. “It was meant to be 1,000, but ended up about 950 because some of them were fucked – either the printing or I glued them to my hand.”

Luckily Alex’s efforts weren’t in vain, and he was able to take Holy Roar on full-time the following year after just a dozen releases. Since then, the label has continued to grow, helping launch the careers of respected bands like Trash Talk, Touche Amore and Gallows. The latter had already released their debut, Orchestra Of Wolves, via In At The Deep End, but a chance encounter in 2007 led them to Alex, and brought wider recognition for Holy Roar. “[Gallows guitarist] Lags bought some old band t-shirts off me,” Alex explains. “I asked him if there was anything he wanted to release, and he said their 2005 demo. That was how it happened! It sold out in a couple of days, which helped let people know who we were.”

As time has passed and bands have begun to forge their own paths, some have outgrown Holy Roar. Gallows ended up signing to Warner Bros for 2009’s Grey Britain, while Brutality Will Prevail signed to Century Media in 2013. Rolo Tomassi’s route was more complex; they released 2008’s Hysterics and 2010’s Cosmology via Hassle, before self-releasing Astraea in 2012. For last year’s beautifully brutal Grievances, they re-signed to Alex’s label. It marked not just a return to their home, but a return to form, as they ended up selling three times the number of their previous record and picking up awards from the music press. It’s a testament not just to the work ethic of Alex, but the reputation of Holy Roar.

“I wanted to hang on to Rolo Tomassi, but it made sense for them to go to a bigger label,” says Alex agreeably. “Now, with some labels falling by the wayside or stalling, unless you’re going to sign to an outright major, we’re as good as anyone.”

None of the bands on Holy Roar’s roster are household names, but the underground isn’t about chasing mainstream aspirations. From the progressive doom of Ohhms to the obtuse sounds of Svalbard, this is music born from a desire to make something original, and Alex is passionate about getting it heard. “I believe so strongly in what we do and our bands that I think they deserve a fair crack of  the whip,” explains Alex. “I’d defy anyone to come to one of our band’s concerts and go: ‘They’re fucking shit!’ Our bands are not based upon their number of Facebook likes, who’s doing PR or what tours they’ve managed to get on. These things help, but our bands are just about trying to write as good music as possible that’s a bit left of centre.”

While belief and hard work can carry Alex’s bands a long way, there are challenges to running an independent label, and he’s frustrated with the networks and nepotism he sees in the music industry.

“We are entering an age in music where we’re more vocal about racism and feminism, so we should equally be attacking why it’s not democratic,” he says. “Why has that shit band got that support slot just because they have got the right manager? Why have they got the tour rather than Employed To Serve, who are fucking brilliant? Just because they haven’t got the ‘right’ person fighting their corner, even though the band would probably rather have Employed To Serve tour with them, they’re being told this hype band will help sell tickets when maybe they mean nothing. The structures of power in music need to change.”

He’s particularly concerned about the impact these power structures have had on heavy music in the last decade, and worries that our favourite bands of tomorrow aren’t getting the opportunities they need to progress and grow.

“If you ignore the underground, you’re shitting on the future of rock and metal,” Alex says defiantly. “If it wasn’t for people like Metal Hammer supporting Bring Me The Horizon early on, they wouldn’t now be a global band – they were a small, scabby metalcore band.

“Look at the bands breaking now – no disrespect to these bands – Gnarwolves, Creeper and Milk Teeth, they’ve broken through from DIY but from a softer place than BMTH. I worry that heavy music, apart from bigger bands who are now essentially older bands, is being ghettoised again because we’re not having as many heavy bands coming up.”

In the meantime, Alex will continue to fight for underground music. One of his proudest moments in Holy Roar’s history was watching Throats finally receiving the recognition they deserved by playing to thousands of people at 2010’s Sonisphere festival, and taking Rolo Tomassi to SXSW in 2009 and Soundwave in 2010. Now that same band will be headlining Holy Roar’s 10th birthday party at London’s Dome, alongside Svalbard and Hang The Bastard, on what Alex calls his “ideal day”.

“We’ve not done things like this before, we’ve never done a big gig, and I thought if we don’t do it for being 10 then we’ll either look like we’re lazy or full of ourselves. A lot of our bands acknowledged how much of a big deal it is for us, and hopefully the fanbase as well. In terms of the history of the label and where it’s going, I think we’ve pulled it out of the bag.”

Saviours Of The Underground

**ROLO TOMASSI – ROLO TOMASSI EP (2006)
**“Essentially the release that kicked everything off for Holy Roar by perhaps the band that still defines the essence of the label today.”

THROATS – THROATS EP (2010)
“A hugely respected metal/hardcore crossover act who were on the cusp of such great things… then split up.”

LAST WITNESS – GIVE UP EP (2010)
“The return of one of the best, most respected UK hardcore bands, released by three lynchpins of UKHC at the time [Thirty Days Of Night/ Purgatory/Holy Roar].”

PARISO/KEROUAC – SPLIT 5” (2010)
“Two leading lights of the ‘UK Swell’ hardcore scene, brought together in ‘pop-up’ packaging, available in two colours, on 5” vinyl and credit-card-shaped CD. We couldn’t even make money on this release and the playing time is just five minutes! Our most ridiculous release ever.”

WILL HAVEN – VOIR DIRE (2011)
“I first saw sludge/hardcore kings Will Haven support Deftones when I was 14. Chris Fehn of Slipknot played bass for this album. Teenage goals realised.”

COLISEUM – SISTER FAITH (2013)
“Absolute heroes for me since I was 18 – getting approached to release this album was a dream come true. Amazing hardcore/punk/post-punk with a conscience.”

CONAN/BONGRIPPER – SPLIT LP (2013)
“We’ve done a bunch of stoner/doom now, with the likes of Slabdragger, Ohhms and Wren, but this transatlantic epic two-track, 30-minute release was something rather special.”

MORE THAN LIFE – WHAT’S LEFT OF ME (2014)
“We were hugely happy to stage the ‘comeback’ of MTL and give their catalogue a comfortable home where it could stay available rather than reach silly money on eBay like it used to!”

Head over to www.holyroarrecords.com/metalhammer to download your exclusive Metal Hammer Holy Roar mixtape!