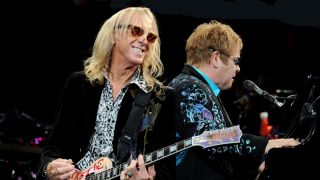 As a member of the Elton John band since 1971, Johnstone has performed on a mind-boggling number of stone-cold classic hits known the world over. In fact, during certain stretches of the mid-‘70s, it seemed as if the only thing that could elbow an Elton John track out of the number one slot was the next Elton John song. “We knew what we were doing was really good,” Johnstone recalls, “but we always felt as if we had to be cool about it. We held back from jumping up and down. Again, we were just doing the work. We didn’t have a lot of time to reflect on what we’d just done because we were already on to the next thing.”

But reflection was the order of the day when Johnstone sat down with Classic Rock recently to discuss “the 10 records that changed his life.” The guitarist picked not one, not two, but three discs by the Beatles (“What can I say? I love them so much”), along with selections by Elvis Presley, the Shadows and the Incredible String Band, among others.

“Some records stay with you; others not so much,” Johnstone says. “There have been a few times where I remembered really loving a record, and I put it on years later with high expectations and said, ‘What was I thinking? Why did I like that? That sucks!’ But that’s not always the case. Most of the time, like with the records on this list, you hear them and they maintain their brilliance. They float into your ears and you go, ‘Oh, yeah… That’s still special.’ They never go out of fashion. They’re timeless.”

And with that, he’s ready to go, but not before adding, “Ten records aren’t enough. I could easily name a lot more.”

“When I was a little kid living in Scotland, my sisters had 78s of the old Elvis stuff. Jailhouse Rock and Hound Dog – those two records really got to me. In so many ways, and ways I didn’t even understand, they resonated with me like nothing else had to this point.

“I’m partial to early Elvis, when he wore the black suit and rocked out. The later Elvis stuff I’m not such a fan of – it just got too over the top and removed from real rock‘n’roll. But at first, he was great. I defy anybody who plays rock‘n’roll to say they weren’t influenced by him. Whether you know it or not, he’s part of what you do.”

“What a beautiful song. This was the first Shadows song I ever heard, and it just blew me away. Hank Marvin was the guitarist – still is – and he really made a big impression on me. I heard this song when I was on vacation with my parents, and I remember saying, ‘What is that? Who is that?’ That beautiful Stratocaster with a little delay on it sounded so nice.

“They were an instrumental band, but they were also Cliff Richards’ back-up group. Their singles were absolutely superb, and they absolutely changed my brain around. I held on to that fan worship over the years. Hank Marvin is one of my favourites.”

“The Beatles’ first proper single. Unfortunately, my pal Ringo didn’t play on it – they brought in a studio guy. When I heard this song on pirate radio, it was like the weirdest thing I’d ever heard, but I loved it.

“Anytime I hear it, it brings me right back to that first moment of listening to my little transistor radio and hearing it coming in all scratchy and fuzzy on Radio Carolina, which of course was off of a ship. What a great memory.”

“This was from their first album. Route 66 was on the record, too – I think it was the first track. I loved their whole sound – the guitars, Charlie’s playing. What a fantastic band.

“I did love the Stones, but I was probably more of a Beatles person, to be honest. I can be very stubborn. To be honest, I think there was some jealousy in there, because my girlfriend loved the Stones. What can I say?”

“My first broken-heart song. What a great pop song, and it had such atmosphere and insight, which you didn’t get from a lot of stuff back then. They were already going somewhere else with their music.

“It was an exciting time. Even though the Beatles were still playing three-minute pop songs, they were beginning to stretch the format a bit. This one made me shiver. I broke up with my first girlfriend and I heard this song – oh, man, it just captured all the emotions.”

“He was the first acoustic guitar picker who really blew my mind. He had an EP that had a song on it called Running From Home, and that really got to me. Anybody who likes guitar playing has to check it out.

“It sounded like two guys were playing at once. I heard it and said, ‘OK, I’ve got to learn how he does this.’ I sat with the record for a whole day and worked it out. Bert was later a founder member of Pentangle, who also featured John Renbourn – he was great, too. Both guitarists have now passed away, unfortunately.”

“Not the Young Dubliners, this was the actual original Dubliners – a real rough, tough, hard-drinking, hard-fighting Irish band. Their banjo player, Barney McKenna, who also sadly passed away recently, influenced me quite a lot.

“I tried to emulate Barney’s style. Before playing with Elton, I was in a band called Magna Carta, and we did a live album called In Concert. You can hear me playing a little bit of Barney’s style there. He was a fantastic player.”

“What a title – how psychedelic can you get? They were amazing. Maybe I’m a tad prejudiced because they were from my hometown, Edinburgh, but I actually didn’t find out about that till later.

“The whole album blew me away completely. A lot of people were saying this was the band’s Sgt. Pepper – it’s true that it’s very different. Nobody was doing stuff like this at the time. It’s got a lot of different styles of music blending into something quite original. They remain one of my favourite outfits of all time.”

“A great record in every way. I got it when I was living in London. I was 17 and had left Scotland. It was an unusually warm day – London doesn’t have a lot of warm days like that one – and I went to Shepherd’s Bush Market and bought the record as soon as it came out. From the moment I put it on, I knew it was brilliant.

“If you’re going to end your career as a band, this is the record you want to do it with. Unfortunately, Let It Be was the album that was released last, but this is the Beatles’ real final album. A masterpiece.”

“We were recording in Germany, and on a free night I went to see Pink Floyd. They knocked me right out. They performed the whole Wish You Were Here album, which I hadn’t heard yet. I went right out and bought it, and I was astonished at how great it was.

“David Gilmour is one of the finest guitar players ever. Every solo, every fill – he’s got it. Incredible phrasing and tone. Shine On You Crazy Diamond is like the perfect song. Right from that beautiful intro section, it just pulls me in.”