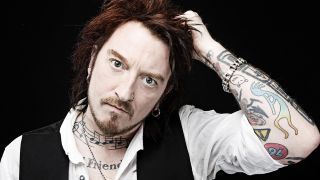 A tireless one man cottage industry – currently prepping new releases from Hey! Hello! and The Wildhearts – Ginger is arguably the UK’s most prolific song-writer. Songs & Words, his first book (self-published via a successful Pledge campaign) is an autobiography of sorts, offering a not-for-the-faint-hearted trawl through the highs, lows and ‘what the fuck just happened?’ episodes in his three decades in the music business via detailed dissections of [almost] every song he has ever written and recorded. It’s a fabulously entertaining saga, one that makes The Dirt seem as family-friendly as a Harry Potter book. Here are ten things we learned while flicking through its pages.

1. Trying to fit in with the ‘in crowd’ almost got Ginger killed.

When the Wildhearts’ debut EPs were largely ignored by the UK rock media, their record label convinced Ginger to have the tracks remixed by in-demand grunge producer Terry Date for re-release as a mini-album. A trip to Seattle to oversee the mixes proved eventful for the band’s frontman. It was here that Ginger tried crack for the first time – “the hit seemed like pure love,” he recalls – and almost had his grand rock ‘n’ roll adventure ended before it had properly started when he was accosted by a mugger who demanded his wallet at gun-point. Ginger’s not-entirely-advisable response was to tell the gunman “You’d better shoot me with that thing, or I’ll stick it up your arse!” The bemused/terrified miscreant duly turned on his heels and fled. “It features in my top ten near death experiences,” notes Ginger blithely.

2. On their first trip to New York, The Wildhearts killed a tramp.

Strictly speaking, says Ginger, the band “inadvertently assisted” in the death of a down-and-out gentleman. The story goes that the band befriended a homeless guy, and one day, upon hearing that it was the man’s birthday, the band had a whip around so that he could treat himself to an evening with hookers and cocaine. What The Wildhearts didn’t know, however, was that the ‘homeless’ guy had an apartment he shared with his girlfriend, who was understandably displeased to return home and discover her gakked-up lover in bed with prostitutes. So displeased was she, in fact, that she set fire to the apartment, and her unfortunate boyfriend didn’t make it out of the blaze alive. Awkward.

3. You will NEVER see the video for If Life Is Like A Lovebank I Want An Overdraft on TV.

Perrmanently at war with The Wildhearts’ record company EastWest, Ginger saw an opportunity for sabotage when the label entrusted him to make a video for 1995 single If Life Is Like A Lovebank I Want An Overdraft. The resulting promo, he recalls “featured love beads pulled out of arses, chocolate bars rammed into vaginas, cheese graters rubbed against scrotums, and copious wanking.” When the video was premiered for the nice lady at EastWest’s video department she instantly burst into tears. “It was a mean and cheap but deeply satisfying trick,” notes our unrepentant hero.

4. The video shoot for Anthem was pretty damn messy too.

Bored of modern rock music, in 1997 Ginger decided to make an album that would serve as “a lit firecracker up the arse of this tired genre.” The result, Endless Nameless, was, as the singer proudly notes, a “challenging listening experience”, yet it still featured, in Anthem, a single catchy enough to put the band back on Top of the Pops. For the single’s video, Ginger split the budget between production costs, and drugs and alcohol for an post-shoot party to end all parties. “It was magical,” Ginger writes. “Perfect. Ritch [drummer Ritch Battersby] personally took around a huge bag of pure MDMA to the collective ravers… Quite easily the best video shoot of my life. Most likely the same for the lives of those in attendance too.” Speaking as one of those in attendance, this writer can only concur.

5. On the Endless Nameless tour, The Wildhearts wanted to make their fans literally shit themselves.

The Wildhearts employed two sound engingeers on their Endless Nameless tour, one hired to mix the band, the other to mix noise frequencies. “The goal,” says Ginger, “was to make the audience either vomit or shit. The full effect was only achieved in a couple of instances, but those tiny victories smelled of success. Well, shit, vomit and success, to be completely honest.”

6. Ginger’s second solo album, Yoni, was titled in tribute to his love of vaginas…

Returning to his native North-East following a break-up with the mother of his children, Ginger made a conscious effort to live out all his bachelor fantasies. “I spent the next year fucking anything that would fuck me back,” he writes. “Which, as I discovered, was a fair amount of people…Two girls in a bed would be an arrangement I encouraged at every opportunity… I’d drive from Gateshead to London just to take part in a multi-girl romp. Then I’d drive all the way home before morning – my moustache and beard heavy with the flowery fragrance of vagina.” The song When She Comes features the sound of one of his lovers orgasming.

7. …But falling in love left a sour taste in his mouth.

At some point in 2006, Ginger fell in love with an American girl who befriended him on MySpace. Debbie was a Texan beauty, the daughter of a country singer, and quite unlike the other girls the singer had met online. After months of courtship and conversation, Debbie flew to England to be with her smitten ‘boyfriend.’ Waiting for his love at Birmingham airport, Ginger was alarmed to find himself face-to-face with a frail old lady, four foot tall, with Joey Ramone spectacles, and “dry, pasty skin that looked like it had just been introduced to daylight after years underground.” Debbie was soon dispatched back to Texas, but would spend months afterwards trying to ‘catfish’ Ginger using other stolen photographs. Weirdo.

8. For a split-second, Ginger once considered murdering his former Wildhearts bandmate Danny.

Ginger’s decision to split up The Wildhearts after recording Endless Nameless was largely based upon a gut instinct that if he didn’t, at least one of the band would end up dead from drug abuse. While his relationships with drummer Ritch Battersby and guitarist Jef Streatfield remained cordial in the aftermath of the split, his friendship with bassist Danny McCormack became rather more fraught… not least when the singer fell in love with the bassist’s former girlfriend. An attempt at clearing the air during a trip to the North-East started badly when Danny punched Ginger twice in the face: enraged, Ginger briefly considered running the bassist over, and only refrained from doing so after envisaging his former bandmate’s corpse on the road and imagining his own son visiting him in prison. Dark.

9. Ginger is no longer a huge fan of Blur guitarist Graham Coxon.

Ginger hoped to recruit Graham Coxon to sing on a track called Confusion on his epic 555% album, but never heard back from the guitarist. “I imagine the only people in the UK who are less helpful than Graham Coxon himself are the people who handled Graham Coxon’s management at the time,” he writes. “Utterly useless fucking cunts. The type of people who would inform the fire brigade of a burning house once the smouldering rubble had cooled down.”

10. Lemmy was supposed to write the foreword to Songs & Words.

A huge Motörhead fan, Ginger was honoured when his good friend Lemmy agreed to write the foreword to his book. Lemmy was reading the story when he died. “In the wake of this sudden and incalculable loss there will be no foreword,” Ginger writes at the outset of the book. “To be honest I can’t even think of anyone I would approach in the absence of this truly great man.” Amen.

The Pledge campaign for Songs & Words has now ended. If you can still find a copy of the book, you should buy it.

Read more from Ginger in the TeamRock archive.

The 10 Best Years Of Music – by Ginger Wildheart