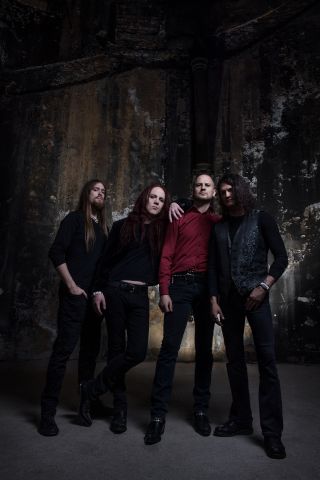 The song is taken from the band’s upcoming album A Fine Game Of Nil, which will be released on June 28 via Apocalyptic Witchcraft Recordings.

“This video has been a project of epic proportions in its own right”, muses frontman Nathanael Underwood.

“We wanted to work outside of the established paradigm of the video where the band mimes unconvincingly to their own music, usually in a warehouse. And besides, when else are we going to have an opportunity to tell a dystopian post-apocalyptic science fiction story through the medium of film?”

And that it does. We're getting elements of John Carpenter's The Thing, complete with icy tundras, cunning aliens and ace special effects.

"The team we brought together had real pedigree: the makeup artist worked on the recent Star Wars films, the prosthetic makers worked on Men In Black and the upcoming Spiderman, the head set designer on one of the Sharknado films, and some of the costume detail we used appeared in the original Alien movie," explains Underwood.

“Neil Kernon did a sterling job on the mix of this album and Rising Of The Lights is no exception. Every song on the album articulates a different facet of our identity with its own voice, but Rising Of The Light brings together many of the elements new to our new album A Fine Game Of Nil in one relentless assault.”

Take a look for yourself below.

A Fine Game Of Nil is on sale June 28 via Apocalyptic Witchcraft Recordings and is available to pre-order now on limited edition vinyl, CD and digital release.