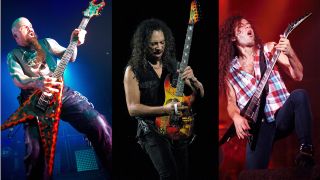 Hey there, the gunslinger Reece Alan Scruggs, lead guitarist for Havok, here to count down my top 10 thrash solos of all time. Just a tiny disclaimer: I love all kinds of thrash bands, all kinds of styles of guitar playing in those bands, etc. But I’m pretty particular in what I dub a great guitar solo. With that being said, you’ll see repeat names on this list. Why? It’s my list! So, sit back, grab a beverage, and ready your angry, chatter driven troll fingers to comment on how pissed you are that I didn’t include your favorite moon boot wearing raging guitarist.

I gotta admit and with great respect, I’m not the most well versed in Annihilator. With that said, how the fuck can you deny this goddamn solo?! Jeff Waters uses all the scales and feel I dig in a shredding solo with catchiness to boot! With not being the biggest fan of Annihilator, this solo and song deserve to be on this list no doubt.

Holy shit, man! I love Forbidden. I’m way more into the Twisted Into Form record, as well as Tim Calvert’s contributions to that and the records to follow,  but there’s no denying Glen Alvelais’ ferocity, skill, tone, and creativeness with this gorgeous piece of shred from their first album Forbidden Evil.

Say what you want about Kirk’s playing, there’s no questioning that he got on the gas for the …And Justice For All record. At least in my opinion, this solo burns hot and is one of my favorites. The phrasing during the E chug part is great, and then it goes into a great melodic phrase over top the ending chord changes. Metallica rules. Fuck off.

Marty fuckin’ Friedman, man. This solo is chalked full of Marty-isms but remains low or nonexistent to most Marty solo lists. Try it out after reading this. Simple distorted tone, one pickup, zero fucking around. Perfection.

Other than Dime, Alex Skolnick ('87-'92 is at THE top of my favorite metal lead guitarists. To me, he’s simply got it all. Skills, feel, structure, style. This solo reflects all of that and then some.

5. Pantera – No Good (Attack The Radical)

Fuck it, maybe Pantera isn’t thrash all the way, maybe it’s this or that. It’s whatever I want it to be. I refuse to not include Pantera on a list of anything to do with metal, ESPECIALLY GUITAR PLAYING. Darrell will always be my favorite player of all time, and his influence on what I do can be heard in Havok. So that in itself makes it thrash. This solo is criminally underrated in the grand scheme of Darrell’s solo catalog.

Alex is back! There’s gonna be repeat names. These cats inspired me too much to only show up once. This solo is absolutely moving. So blistering but so melodic at the same time. Incredible piece of music.

Everyone rants and raves about Tornado Of Souls, it’s on every solo list, and I love it just as much as the next guy, but Marty’s Lucretia solo hits me harder for some reason. And that’s the thing, I said “for some reason”. I can’t pinpoint why it moves me so much, but it’s incredible. A song within a song.

BOOM! Didn’t expect that shit, huh? It’s not so much Angel of Death’s solo but the spirit and chaos of Slayer in a nutshell. I’m really into great guitar players in aggressive bands, but there’s something so raw and undeniablyTHRASH about a crazy Slayer solo. Sometimes you just say FUCK structure, music theory, etc and just crank the whammy bar and gnash your teeth.

I honestly can’t pick my favorite Dime solo. It’s impossible. And with good reason. People have seemingly stumbled upon the deep cuts since Darrell’s passing. And by “people” I mean non-Pantera fans who are just now figuring out that the band and man were way more than just Cowboys From Hell and Walk.  So moving, so much heart, amazing command of the notes and that wild aggressive tone. The fuckin’ man in action. Dime forever.