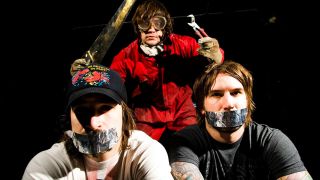 Releasing eight albums over the past fifteen years, Buffalo’s own Every Time I Die have an impressive back catalogue of glorious noise. One of the best live bands that you will ever see, it’s a tough ask to rank their albums in order of greatness as they legitimately don’t have a bad one. It’s like choosing between eight children. Eight loud, unruly, hilarious, aggressive children.

With more words in the combined track titles (36) than the running time of the album (nearly 34 minutes), ETiD’s 2001 debut album followed on from the wonderful chaos of their The Burial Plot Bidding War EP with some quite eloquent metalcore noise. A fine debut, but the band were to head on to better things. Opening track Emergency Broadcast Syndrome is one heck of a way to kick off your debut album.

ETiD’s first album on new label Epitaph after eight years and four albums on New Jersey’s Ferret Music, it bears album art designed by guitarist Jordan Buckley and there’s something for everyone on here – even if you’re just on board for the guest appearances: The Dillinger Escape Plan’s Greg Puciato, Matt Caughtran of The Bronx and Pete Wentz from Fall Out Boy tick many a box. Wanderlust showcases the band’s love of blending Southern Rock with the much more hardcore.

The first ETiD album to break into the Billboard Top 200 in the States, it took the foundations of Hot Damn! (more on that in a minute) and spread the metalcore word to a wider audience through tracks like Kill the Music and The New Black. An album so relentless that the almost boyband-like whoa-whoas on Guitared and Feathered will make you crack up.

When an album title is a reference to Trailer Park Boys then you know you’re dealing with a band with an awesome sense of humour. No Son Of Mine kicks this LP off and has often been used as a live set opener, less a song and more a mission statement. From then on its relentless all the way to closing track Imitation is the Sincerest Form Of Battery. Listening to this album when driving will cause you to lose your license.

The three most recent ETiD albums are all wonderful, a sign of a band hitting their creative peak. Ex Lives broke the top 30 on the Billboard 200, with a two and half year gap between albums making us all realise how much we missed the band. Keith Buckley screaming “we are the first of the fashionably late” on Underwater Bimbos From Outer Space remains one of the bands coolest lyrics (this coming from a band that has hundreds of brilliant, sardonic lines across eight albums).

A benchmark album in metalcore, ETiD’s second long player really announced them to the world and gave them the breakthrough that they needed. You can guarantee that 2003 didn’t produce a more blistering 27 minutes of music at any point. Tracks like Romeo A Go-Go, In The Event That Everything Should Go Terribly Wrong and Off Broadway showcase both the musical skill of the band and their intelligent humour perfectly.

With a subtle wrestling reference in the title (rhythm guitarist Andy Williams is a trained wrestler, fact fans), ETiD’s seventh album shows one of the reasons that they’re so exciting as a band. With chart success and critical acclaim behind them they could have rested on their laurels, instead they decided to keep pushing themselves musically. The result was an album powered by the most awesome second wind, and tracks like Decayin’ With The Boys and The Great Secret take what the band had already been doing well and turn it up to eleven.

In these lists it’s not the norm to have the most recent album at the top of the tree, and this positioning may be powered by Low Teens being on constant repeat right now. But what an album. One gym session listening to this and you could feasibly compete in the World’s Strongest Man. C++ (Love Will Get You Killed), I Didn’t Want To Join Your Stupid Cult Anyway, and album closer Map Change are three of the very best heavy songs of 2016 on arguably the best album of the year. Stellar stuff from beginning to end.

An open letter to metalcore from The Hell