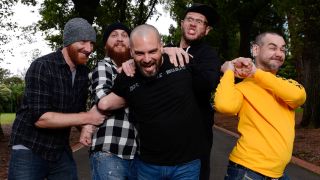 Last year Agnostic Front’s timeless Victim In Pain album turned 30, this year the great hopes of British metal While She Sleeps will release their new album. Those two events, bands and albums, may not appear to have much in common, but they do. In a way they are the opposing ends of a strand of heavy music that has evolved, peaked, nosedived, been mocked, misunderstood, adored and survived in the intervening time since punks and metalheads took those first tentative steps towards each other decades ago. And with metalcore rising once again we take a deeper look at one of the most divisive movements of our world.

The link between punk rock and heavy metal is clear for anyone to see. It’s there in Jeff Hanneman’s love of Crass and The Dead Kennedys, Cliff Burton sporting a Misfits t-shirt way back when and in the crossover thrash of DRI, Suicidal Tendencies and Cro-Mags. These were bands whose fans frequented a skate scene that would happily play Black Sabbath AND Minor Threat on stereos around skateparks. Sure you’d struggle to find a Clash fan at a Judas Priest concert, and vice-versa, but as punk became heavier and metal became faster the two began to assimilate in the mid-80s. Listening with fresh ears it’s hard to know just where to put an album like Cro-Mags’ Age Of Quarrel. Visually and aesthetically they were resolutely a hardcore band, but the music is undeniably metallic. Even in 1986 the lines were beginning to blur.

As the ‘80s turned into the ‘90s, the popularity of alternative culture drove both traditionally-minded metal and hardcore even further underground – with labels such as Victory and Roadrunner happily signing bands from either camp. Roadrunner in particular had an eclectic roster that featured death metal legends Obituary and Deicide rubbing shoulders with uber-positive, Krishnacore pioneers Shelter. They also released albums by New York hardcore exponents Madball and Biohazard, who both crossed over into metal territories. But the band that created the blueprint for metalcore as we know it today were Vision Of Disorder. Their first album had seen them tour with Sick Of It All and other NYHC peers, but on their second album, 1998’s stunning Imprint, they tore up the rule book, made the riffs more technical, the songs more brutal and the approach more metal. They still looked and played like a hardcore band, but as they toured the US alongside Ozzy, Machine Head, Pantera, Fear Factory and the rest of the ‘98 Ozzfest package, your average metal fan would find plenty to enjoy in their monstrous aural assault. They weren’t the only ones either, Integrity have long been considered the first band to be called metalcore, combining a clattering punk rock fury into massive metallic riffs and lyrics about religion and the occult. They never enjoyed the same level of commercial success as VOD but pioneered an approach that was rife in the underground punk scene as the ‘90s drew to a close.

As the new millennium dawned the mix of metal and hardcore was becoming more commonplace than ever, but again the shape and sound was twisting into something else. The influence of both the Swedish melodic death metal scene from At The Gates and In Flames and the underground noise of Neurosis and Today Is The Day began to impact. The Boston scene was the most fertile at this time, from Converge and their utterly unique take on both music and the business of making music to the bass driven wall of noise made by The Hope Conspiracy and American Nightmare (later to change their name to Give Up The Ghost) taking clear inspiration from the latter. Washington’s Botch also deserve a mention as a band that impacted massively on an audience hungry for difficult, angular, heavy music by signing to Relapse Records, touring with The Dillinger Escape Plan and releasing the incredible We Are The Romans album. The former was seen in the more melodic and evidently more traditionally metal likes of Poison The Well and Darkest Hour, bands brought up through the punk rock touring circuit but raised on a diet of Testament, Exodus and Black Flag albums.

At this point though, the sound of these two worlds colliding wasn’t just confined to small scenes in America. Belgium had Rise And Fall, Italy Kafka, the UK was a breeding ground for a group of bands as good as any at that time; Grimsby’s Stand and HHH, Imbalance from Leeds, the Slayer meets Sick Of All thrash of London’s Stampin’ Ground and the entire Kent scene. The stronghold of UK hardcore where xCanaanx, Deadlife Portait, Winter In June and many others attempted to match Boston blow for blow.

During this time pop-punk and nu-metal were the only sub-genres of rock that received any sort of mainstream attention – frankly the idea that any metallic hardcore band could crossover into the public conciousness was laughable. Then one band changed that perception. In 2002 Killswitch Engage released Alive Or Just Breathing and blew metalcore wide open. Taking the most palatable pieces of the jigsaw, the trad metal melodic guitar leads and anthemic choruses, and mixing them with a savage hardcore bite that was far more aggressive than anything else you’d see on MTV2, they appeared to be the band that everyone in heavy music was waiting for. In the process they opened the door for the likes of Unearth, Shadows Fall and God Forbid to enjoy a period of success previously unimaginable. This was no longer a secret, Poison The Well were on a major label, Stampin’ Ground played the main stage at Download. There was money to be made in metalcore.

The success of KSE also effected the artistic endeavours of the genre. So instantly recognisable was the Killswitch sound that it was aped unashamedly by many a newcomer, where before it was an underground scene full of innovative and eclectic bands there was now a formula. This in turn led to every chancer with a guitar chucking some beatdowns in between a few In Flames cast-off riffs and barking over the top – save for the inevitable emotive chorus. Botch, Vision Of Disorder and Integrity had split and been replaced by Caliban, Still Remains and As I Lay Dying. Killswitch Engage became something akin to the Metallica of metalcore, enjoying continued success whilst others dwindled but, with Howard Jones taking the mic from Jess Leach, becoming more hard rock and ballad heavy with each new album. The punk rock spirit was long gone, even bands such as Trivium, a band who have not a single atom of influence, approach or sound of punk in their make up, were bizarrely linked with the metalcore tag. A name that seemed to have less and less meaning the more the noughties rolled on.

In it’s place came the more extreme, but equally formulaic, deathcore movement. Bands such as Emmure signed to Victory and brought with then an entirely different approach and fanbase to co-exist alongside the label’s punk ethos. An approach that was entirely at odds with the ideology of underground punk rock. Metalcore had hit its commercial peak and critical low, newer bands like Attila and Blessthefall having more in common with airbrushed, cynically-minded boy bands than the melding of two counter-cultures. To onlookers from the outside metalcore was dead, a one dimensional flash in the pan to go alongside glam and nu-metal in the ‘what were we thinking?’ Fads of alternative culture.

But it seems metalcore is made of sterner stuff. The renaissance is well on its way now, starting, as one would always want it to, where you would least expect it. Australia hasn’t ever been known for it’s punk rock scene, but it’s where Parkway Drive hail from. Their slow, steady build has given the scene and their genre a shot in the arm, meaning some of their excellent peers like Feed Her To The Sharks and The Amity Affliction are looked at as bands with a genuine chance of international success. It’s also coincided with the rise of Bury Tomorrow, Feed The Rhino and the aforementioned While She Sleeps here in the UK to take their music from small, dingy dives onto some of the biggest stages in the world. And some of the American trailblazers are back at the top of their game, Jesse Leach has returned to KSE to oversee two stunning Download sets and a near best album Disarm The Descent and Vision Of Disorder reformed and released The Cursed Remain Cursed in 2012. An album that more than lives up to its predecessors.

Ultimately though the biggest success of metallic hardcore, crossover, metalcore, whatever tag you wish to give it, is that 30 years on from those first uneasy movements towards each other, punk rock and heavy metal are still finding new ways to come together and help us bang our heads. For that we should be grateful.