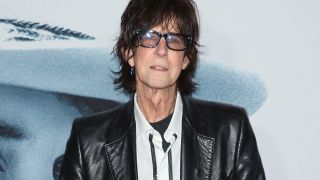 Ric Ocasek, the vocalist and guitarist with The Cars, has died at the age of 75.

He was found dead at his Manhattan home after officers from the New York Police Department responded to an emergency call around 4pm (9pm GMT) on Sunday.

Police said there were no signs of foul play and no cause of death has yet been reported.

Ocasek was born in Baltimore in 1944 and co-formed The Cars with bassist Benjamin Orr in Boston in the mid-70s. The group released their self-titled debut album in 1978 where they were joined by guitarist Elliot Easton, keyboardist Greg Hawkes and drummer David Robinson.

Ocasek was the backbone of the band, writing the majority of the group’s songs, and helped pioneer the New Wave movement with songs including My Best Friend’s Girl, Just What I Needed, Good Times Roll, Drive and You Might Think.

Ocasek released the solo albums Beatitude in 1982 and This Side Of Paradise in 1986, and following the band’s split in 1988, he went on to release another five albums before The Cars reunited for 2011’s Move Like This.

He was an acclaimed producer, working with artists including Bad Brains, Nada Surf, Bad Religion and Guided By Voices. He was also behind the desk for Weezer’s Blue and Green albums, along with 2014’s Everything Will Be Alright In The End.

The Cars were inducted into The Rock And Roll Hall Of Fame in 2018 alongside Bon Jovi, The Moody Blues, Dire Straits and Nina Simone.

Weezer were one of the first to pay tribute to Ocasek, saying: “The whole Weezer family is devastated by the loss of our friend and mentor Ric Ocasek, who passed away Sunday.

“Ric meant so much to us and taught all of us so much about music, recording and songcraft. But more importantly he taught us that one can be in a respected position of great power and yet be absolutely humble and have the biggest sweetest heart in the industry.”

Other tributes have been posted on social media from other artists including Slash, Billy Idol, Bryan Adams and Richard Marx.

Aw, man. RIP #ricocasek and thank you for the songs on “Heartbeat City” alone. You were a true original.September 16, 2019

Sorry 2 hear about #ricocasek RIP loved his work with the band #SuicideSeptember 16, 2019