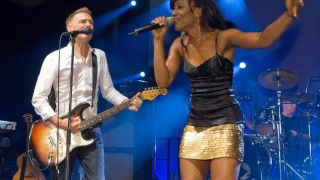 You can set your watch by Bryan Adams. At a time when most artists of his vintage are disappearing off the radar – and sometimes the rails – in the name of esoteric pet projects, rehab or good old- fashioned laziness, the Canadian rocker sticks to the itinerary he established on breaking through in the mid-80s. That is, one album of well-crafted, heart-on-denim- sleeve mainstream rock, delivered every three years, backed with a whistle-stop tour of stadiums, and sent platinum by his legions of admirers.

What’s the secret to writing lyrics that are romantic without being sleazy?

Well, I’m still working on it. I think the thing is just to write lyrics you can believe; if you don’t believe in the words it’s very hard to sing them. I’m trying to write the truth. It’s true I have a different approach to romance to a band like Mötley Crüe, but I’ll bet you they’re just as pathetically romantic as I am when it comes down to it. Look at Tommy Lee. I mean, he’s a hopeless romantic.

When I was writing 11, I was in the usual Adams state of mind. If you’ve got my earlier records, you’ll know I always touch on the same theme: the connection between two people. It’s still there in my music today.

**Would you be prying if you ask who these songs are about? **

Yeah, you would be, actually.

I once read that your songs are played at more weddings than any other artist.

I wouldn’t know. I don’t go to many weddings.

Was it good to hook up with your old songwriting partner Jim Vallance again for some of the songs on 11?

Yeah, I managed to convince Jim to come out of hiding for a few songs, and I’m really happy about it. We’ve always had a pretty good songwriting rapport. The last songs we wrote together were back in 1991. You tell me if it’s made a difference. I think 11 sounds like an Adams record; and, you know, Jim was a big part of that from the beginning. Anything that makes it sound like that is a good thing.

Your vocals on the record sound throatier than ever.

I’ve always sounded like this. And I actually never lose my voice. A lot of it has to do with touring. I’ve played a lot of gigs, and the more you work your voice, the more it tends to get a thicker sound. I don’t think you could teach someone to sing like this.

I do think, however, that most people can sing, even if they don’t sound like me. You should go down and watch the football crowds at Stamford Bridge [home of Chelsea Football Club] – that proves to me that anybody can sing. It’s not always in tune, but we weren’t talking about tuning.

Why the obsession with Chelsea FC?

It’s just because I live close by and it’s easy to walk to. They’ve always done pretty well. I’ve supported Chelsea since I moved to England – and before that. My first game was in 1985. I haven’t got a box; I’d much rather be down there with everybody else. I used to be in the Matthew Harding stand when I first got my season ticket. Do the fans recognise me? Yeah, but they don’t hassle me. All I get is [cockney accent] “Awight mate?” And if I walked down Oxford Street? Nobody would notice me. This is all by-the-by, because I don’t go out much in London anyway. If you saw my tour schedule you’d understand why.

Why don’t you give yourself a break?

I do give myself a break these days. I can’t tour all the time, so I’ll just schedule 10 shows a month, maybe about 100 shows a year. A lot of bands just go out and tour without a break, but I can’t do that. I work hard, but I don’t like to be out there for long periods. I like to be fresh. I’m pretty jet-lagged today.

**Have you picked up any British mannerisms since moving to London? **

My parents are English, so if there were any mannerisms I would already have picked them up. I consider myself Canadian, but I love Britain and the sense of humour, and that there’s always something going on. Vancouver felt like the end of the earth when I lived there.

**You’ve been in demand as a photographer recently. You’re not planning on quitting music are you? **

Well, no, because you guys at Classic Rock haven’t hired me yet. So I don’t think that’s gonna happen. I’ve actually shot quite a few rock stars though; I did a great shoot with Tommy Lee recently. Like I say, he’s a hopeless romantic and a great laugh.

Your subjects mainly seem to be naked supermodels. How did you convince Kate Moss to strip off?

I just asked her, mate. I just got on with it. The lesson here [with women] is that it’s not about having some sort of gift, it’s just about asking. All you gotta do is ask. You already know you could get a ‘no’. That could be the answer. All you can look forward to is a ‘yes’. And, you know, Kate Moss has always been quite co-operative when it comes to rock’n’rollers.

**You also do a lot of charity work. Aren’t you appalled by the hedonism of many of your fellow rockers? **

I really don’t know what other rock bands do, mate. I wouldn’t even hazard a guess. Each to his own. I don’t think that’s true anyway. I think your impressions of rock musicians might be a little different from the truth. Most of the musicians I know are pretty hard workers.

Do you harbour any secret ambition to beat the 16-week UK singles chart run you had with Everything I Do… back in 1991?

Does that still hold the UK record? I don’t even know. I never set out to do that. That was the flukey thing. You know what? I’ve never even thought about it. I don’t even care, man. I just get on with it. So yeah, I’m hugely successful by accident; I’ve never courted it. I don’t care about chart positions.

You have to feel for Ryan Adams (pictured). In 2002 – and not for the first time – a heckler shouted at the alt- country star to “play Summer Of ’69”. Adams didn’t take it well. He turned up the house lights, located the offender, refunded the price of his $30 ticket and had him kicked out of the venue. “They’re just a bunch of fucking cunts,” Ryan noted of the increasing number of wags at his concerts. “They come to my shows just to provoke me.”

Bryan Adams chuckles when we remind him of the incident: “I dunno, man. If you go out there with that name, I reckon that’s what you’re gonna get!”

I THOUGHT I’D SEEN EVERYTHING