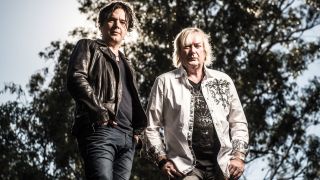 “I was a fan of his as a kid,” enthuses singer, multi-instrumentalist and producer Chris Braide of his Downes Braide Association cohort Geoff Downes, a man whose keys adorned albums by Asia, Yes and The Buggles. It’s the latter group’s debut that caught Braide’s attention. “I absolutely loved The Age Of Plastic – I loved his chord progressions and that Solina string machine was so pretty. Sometimes when you hear another musician you instinctively get what they’re trying to do.”

Both Braide and Downes had played in Trevor Horn’s Producers at different times but the pair didn’t meet until a 2010 Buggles reunion gig. Downes explains: “We talked about working together but then he moved to LA and I joined Yes for Fly From Here, but we still managed to work around that to make [DBA’s debut] Pictures Of You. We both had a similar background and upbringing in Cheshire, and although Chris is 20 years younger, we’ve followed similar paths. We both moved to London to try to make a living in the music business and we both spent time in America, so we really had a lot in common.”

The pair have been busy since their 2012 debut, Downes with Yes and Asia, and Braide writing and producing for the likes of Beyoncé and Britney Spears, but thankfully they both found the time for a second album, Suburban Ghosts. “This album was done more remotely,” begins Downes. “On the previous album we sat down in a room and chucked ideas around. This time I presented him with some stuff and he fashioned it in his own way.”

Braide adds: “He sends me bits of music of about a minute, or a chord progression. It took a long time because I did a version of the album that I scrapped, but I tried again and that’s when it became a loose concept album:
I wanted it to sound more like a soundtrack than a series of songs. We wanted to get away from that. It’s a lot more interesting to me as a big Pink Floyd fan to have sound effects weave in and out and take the listener into another world, rather than have one three-minute song after another.”

Braide continues: “I’m an ex-pat from Cheshire. So Suburban Ghosts is about the nightmare of going back to somewhere to find you don’t know anyone. The first track, Machinery Of Fate, is about finding a letter from someone I knew who had passed away, and I was jolted into thinking I should see people more. Without sounding depressing, time has passed and some people aren’t here any more. It’s a wake-up call.”

Downes bows down to his co-writer for his lyrical ideas. “He’d run things by me and I’d say, ‘Yes, I can totally relate to that.’ I’m not a prolific lyric writer so it was largely on his shoulders. He instinctively understood that
I would like what he came up with.”

“I think we know each other musically quite well,” says Braide. “I think I’m capable of making an album without getting sidetracked, and I was thinking about the reviews of the first album and what people liked. That’s why I went from having 10 short songs into what we ended up with, because people liked the cinematic elements of Pictures Of You. When the album was close to being finished, I said, ‘We need some more keyboard solos and it’s pointless me doing them,’ so I sent him the mixes and he sent them back with these great solos. There’s one on North Sea that’s just wonderful, a great melody that’s so him.”

Downes isn’t afraid that the synth-pop direction of the album may alienate fans of Yes and Asia: “I think there’s a depth in the writing and the harmonic textures that would be appreciated by some in the prog world.
I hope the more open-minded fans will give it a chance, like they did with the first record.”

Braide explains further: “I’m from a pop background, so there’s still a pop sensibility there. It’s song-based and one of the reasons he wanted to work with me is that I’m a writer – lyrics mean a lot to me. It’s about getting out these thoughts, and with both of us having a similar situation, it’s like an Omega Man going back to a place of childhood.”

“I went to music college and studied classical and jazz,” Downes recalls. “I started off as a session musician in London and also wrote commercials. I think that pushed me more into mainstream writing, and that became more evident when I got together with Trevor Horn. So Chris and I had similar ideas about making music. We were both big Yes fans and I loved bands like ELP and The Nice – keyboard-driven bands fascinated me. When The Buggles came out there was a big swing from guitars to keyboards in pop music. Guitars had been the main focus in punk but when that faded keyboards got their own window. When the second wave of keyboard-led bands came out of the new wave movement it was suddenly interesting again to those of us that had grown up on Procol Harum, The Nice and Yes.”

The subject of the band playing live is a sticky one. “One of Chris’ quips is that this is the best band nobody will ever see live!” laughs Downes. “But we would never discount the possibility.”

Braide is rightfully proud of Suburban Ghosts, “It’s the better of the two albums,” he says. “Pictures Of You was a stab in the dark because we’d just met. In my mind, this album is more consise. It sounds like two people who know each other and I’m really happy with it.”

“I think we both are,” adds Downes. “I’m really happy with his writing and his friendship, so it’s a very nice project to be involved in.”

Suburban Ghosts is out now on Cherry Red. For more information, see www.downesbraide.com.