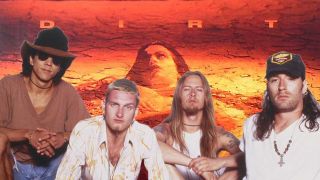 Alice In Chains' debut offering, Facelift, helped to catapult a nascent Seattle scene into the mainstream. By 1991, and the releases of Nirvana's Nevermind, Pearl Jam's Ten and Soundgarden's Badmotorfinger, the whole world had been introduced to this brand new genre: grunge, and it had taken on a life of its own.

But everything was just about to get darker – a whole lot darker – with AIC's sophomore record, Dirt.

Our online editor reveals why the devastating beauty of this nihilistic album grabbed the attention of a whole generation of teens, and still does to this day.

If it wasn't for Alice in Chains, I probably never would have become a metalhead.

By the time I discovered them, the band had been put on indefinite hiatus. Layne Staley had tragically passed away, Jerry Cantrell was working on his solo stuff and the band hadn't yet enlisted William DuVall.

Most of us first discover – and I mean really discover – music when we are still within the thralls of puberty. We are discovering ourselves; our likes, our dislikes. We're struggling to come to terms with the hormonal changes tearing through our bodies, and going head-to-head with the torment of school, authority, bullying, exams and anything else that might rear its ugly head during those formative years.

I hated school. I had a deep, visceral hatred towards authority figures, towards the venomous harpies I had to share a classroom with, day after day. I was bitter, resentful, full of rage and frustration. Like many other metalheads, music and other forms of media became my only refuge and I devoured it all.

I didn't have any older siblings or friends to introduce me to new bands, instead I had to actively seek them out. I would buy soundtrack after soundtrack, obscure genre-specific compilation albums, music magazines by the pile and search compulsively online for voices that spoke to me.

After growing up listening to classic rock, 80s pop (thanks, mum) and an eclectic selection of whatever was in the charts, I finally discovered punk and grunge – perhaps because of the sudden resurgence of punk pop thanks to anthems from the likes of Blink-182 and Sum 41 – and it was a welcome relief from the only other alternative to Radio Top 40 sounds, nu metal.

I refused to like nu metal. It was too trendy, and of course I liked to think I was edgy. I didn't want to be into whatever my generation was into. Plus, the lyrics might have been nihilistic, but the music was too poppy – I was after something bleaker sounding, that spoke to my miserable teenage angst.

If that wasn't enough, I couldn't see any women in nu metal. No powerful, angry, growling girls. No female figures to make me feel more at ease with my own fury. Grunge was where it was at.

After endlessly repeating Nirvana's discography, playing Ten until it skipped, screeching Hole's Violet at the top off my voice and writing the lyrics to Smashing Pumpkins' Bullet With Butterfly wings over and over again in my notebook (don't tell me the immortal words 'Despite all my rage I am still just a rat in a cage' didn't speak to you on a deeply spiritual level at age 15), I needed something even more hopeless. Being a teenager sucks.

While browsing through the metal and punk section of Cardiff's Virgin Megastore I happened upon Alice in Chains. They had my name in the title – a name I wasn't particularly fond of – so it felt comforting to find a band who had actively decided to take it as their own. Plus, I'd probably heard their name mentioned in some 90s American teen drivel I'd obsessively binged on as a kid who was desperate to grow up.

So, I bought one of their albums. In fact, I bought two: Dirt and Unplugged. And while Unplugged is the greatest live album (ever), Dirt will forever stick with me for its unrelenting sense of hopelessness.

For many, Dirt wouldn't have been their first taste of grunge's metallic bad boys. Facelift had introduced them to the world and showcased their ability to create heavy, catchy, funk-laden riffs in the midst of darker, more brooding tracks.

Dirt pushed the band further into these murky waters, and the result is a semi-conceptual album that is so coherent in its melancholic anguish that for me, there can be no other way to describe it than as Alice In Chain's crowning achievement.

And like all the greatest works of art, it's the cathartic result of a need to release inner turmoil and transform it into something beautiful.

Dirt was recorded during the 1992 Los Angeles riots. The unrest had begun due to the outrage over the acquittal of four LAPD officers who had been caught on camera beating unarmed black motorist Rodney King. This violent atmosphere had a profound effect on how the record turned out.

Speaking to Guitarist, Jerry Cantrell said: "I was actually in a store buying some beer when some guy came in and started looting the place.

"I also got stuck in traffic and saw people pulling other people out of their cars and beating the crap out of them. That was some pretty scary shit to have to go through, and it definitely affected the overall feel of the album."

The band were also dealing with the realities of their own success. Talking to Music Radar, producer Dave Jerden – who worked with AIC on both Facelift and Dirt – explained how all four members' attitudes had visibly changed since the Facelift sessions, saying that back in 1990, the band had been "hot and ready to go".

"They did some drinking, but there were no drugs. It was funny: They wanted to know where the strip clubs in L.A. were. We were driving down Hollywood Boulevard, so I pointed to one called the Tropicana."

But by the time Dirt was being tracked, things had changed. "They were a big, established band, and the vibe was different.

"They were getting jaded. Layne told me that he didn't like being famous. He told me flat-out, 'People look at you like you're a piece of merchandise'."

Layne was also struggling, big time, with what would be his ultimate un-doing: heroin addiction. The vocalist had recently checked out of rehab, but had returned to using by the time recording sessions were underway, causing significant tension between himself, his band members and Dave Jerden.

Dirt documents Layne's battle, with Sickman, Junkhead & God Smack explicitly referencing heroin. In fact, Layne stated that the album is essentially "the whole story of the last three years of my life," in a 1992 interview with the now-defunct M.E.A.T magazine.

But it wasn't just about Layne. Jerry was battling his own substance abuse, as well as depression exacerbated by the death of both his mother and his close friend Andrew Wood, the Mother Love Bone singer who inspired the single Would?, which featured in the Cameron Crowe movie Singles. Meanwhile, both Mike Starr and Sean Kinney were fighting alcohol addiction.

All of this added to the brutal honesty of Dirt and it resonated with people. The record was released to immediate critical acclaim. It peaked at no. 6 on the Billboard 200 and remained in the charts for 106 weeks. It has since been certified four-times platinum and sold over five million copies worldwide, making it the band's highest selling album to date.

Rolling Stone magazine recognised Dirt in both their 100 Greatest Metal Albums of All Time and 50 Greatest Grunge Albums lists and Guitar World named Dirt as the best guitar album of 1992.

A majority of Dirt's listeners likely won't be able to relate to what life as a struggling addict is like. But the incredible blend of misery and aggression within Jerry Cantrell's somber, brooding vocals, the way they work in harmony with Layne's anguished wails, and the sludgy, distorted guitar tones make it a cathartic experience, not just for the band, but for listeners.

The intense torment of lyrics like Down In A Hole's 'I have been guilty of kicking myself in the teeth' or Angry Chair's 'Pink cloud has now turned to gray/All that I want is to play' are universal to all humans who have struggled or suffered in any way. Newsflash: that's all of us.

Whether you are a metalhead or not, Dirt is a masterpiece so honest and raw you can't help but be drawn in and made to feel something. And for me, it got me seeking out more and more aggressive music. Thank you, Alice In Chains, for being my gateway to the hard stuff, and for dragging me down into your hole of misery and ultimately, extreme metal.

Dirt might have a grimy exterior, but delve inside and it's pure gold.