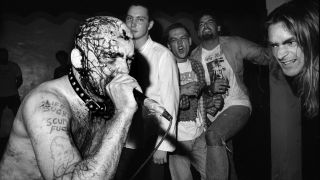 GG Allin is one of rock music's most divisive figures. From his very non-PC lyrics to his forays into coprophilia and self-mutilation onstage, the New Hampshire punk did everything in his power to piss people off.

Despite threats to kill himself onstage for much of his career, GG passed away in 1993 as the result of a heroin overdose. The jock-strapped skinhead has left behind a legacy of disgrace and depravity, which has become part of heavy music folklore, with bands such as CKY and Faith No More covering his music.

If you're new to the man and the madness, or are a devout Scumfuc follower, here are sixteen things you might not know about GG Allin.

1. His real name was Jesus Christ Allin. His brother started calling him ‘Je Je’, because he couldn’t pronounce ‘Jesus’. This then became GG.

3. His first band were called Little Sister’s Date, and covered songs by Kiss and Aerosmith.

5. Allin introduced his famed ‘poop punk stage movement’ in 1985 at a show in Peoria, Illinois. When he literally – and deliberately – shat himself onstage, there was a near riot, as people tried to get away from the stench.

6. Allin always claimed he was the last true true rock and roller, out to reclaim rock music as the real art form of rebelliousness.

8. In 1989, Allin said he would commit suicide onstage on Halloween that year. But he was in jail, so unable to carry out his threat. Despite repeating the claims of his impending suicide in front of an audience, Allin never even tried to follow this through, once telling an interviewer that he would only do it when his powers were at their peak.

9. One of the most hysterical rumours about GG Allin was that he guested on the debut solo album from Styx guitarist Tommy Shaw, titled Girls With Guns. When asked about the validity of the story, Shaw laughed and said: “I wish it were true, but it isn’t”.

10. Allin had a daughter, Nico, born in 1986. This was from a relationship with Tracy Deneault.

11. In his last interview, given just a few days before his death, Allin admitted to being arrested 52 times, and claimed he had raped both women and men onstage.

12. Allin died from a heroin overdose on June 28, 1993. After all his suicide threats, it was accidental.

13. He was buried with a bottle of Jim Beam, as he had requested.

14. His song When I Die was an eerie acoustic blueprint for the way Allin wanted to be remembered after his death.

15. Clean cut southern rockers Drive-By Truckers wrote a song called The Night GG Allin Came To Town. This was based on what happened when Allin and his band The Murder Junkies played at the Antenna Club in Memphis on November 16, 1991 Among other things, he shoved a microphone up his arse.

16. If you are so inclined, a GG Allin Bobblehead toy is available to purchase online. Produced as a hand-numbered, limited edition of 2000, the doll sold out a long time ago, although originals and replicas regularly show up on eBay.