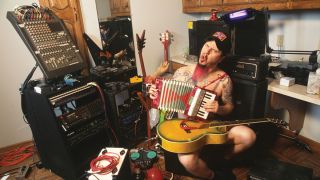 Dimebag wasn’t just a phenomenal musician: he was a revolutionary. Like most of the greatest guitarists in rock history, he played as if the guitar was some magical vestigial limb, as the very essence of his being poured out of him as a bewildering array of ageless riffs and spinetingling lead breaks.

He exerted immeasurable power and influence over the entire metal scene during his career, marching gleefully into uncharted territory time and time again. Unlike most comparable modern metal bands, Pantera simply didn’t need a second guitarist; Dime could do everything, and he did it all with a verve and intensity that could take our breath away.

But aside from that unerring ability to delight and thrill his fans, Dime also commanded the respect and admiration of his peers and even some of those who originally inspired him to pick up a guitar, including Black Sabbath legend Tony Iommi…

“Pantera played with us on a number of Ozzfest tours,” says Tony. “We saw each other quite a lot. Dimebag was lovely guy and great guitarist. He was a leader in their style of music as well as being a really great writer.“

“Generally you have an iconic lead guitarist, or an iconic rhythm guitarist, and Dimebag was an absolute master of both,” says Five Finger Death Punch six-stringer Zoltan Bathory.

“That was what made him so special. He was also the guy who put the groove into heavy metal. You heard him play and you thought, ‘Holy shit, there’s something else going on here!’ Live, he would jump off an amplifier and keep playing while switching pickups in mid-air and operating his whammy bar. He did it all. That was his power.”

In the early, formative years of Pantera, Dime remained very much in thrall to the Kiss, Van Halen and Judas Priest records that had first inspired him to pursue a career as a rock star. But even on those somewhat naïve pre-Anselmo albums, there is a strong sense that the guitarist’s naturalistic command of his instrument was evolving into an unstoppable force.

By the time Pantera reached the creative and commercial breakthrough of Cowboys From Hell, Dime had thrown off the shackles of his early influences and seemed to be single-handedly redefining metal, infusing his powerhouse playing with countless unprecedented tricks and quirks, unleashing those trademark riffs and solos via his trusty Randall Century 200 solid state amplifier and aggressively expanding metal’s sonic vocabulary every step of the way.

“Dimebag embodied all the things that a truly well-rounded guitar player should be,” says Trivium’s Matt Heafy. “His rhythm playing could be minimal and catchy, or technical and mindboggling. His lead playing was so heartfelt and melodic that you could sing along with it but it was also jaw-dropping in its revolutionary technique. He had an uncanny ability to create monumental songs.

And it isn’t just metal bands that were inspired by him. You can hear Dime’s influence in every hardcore or metalcore band’s breakdowns, you can feel his solos in every rock band that attempts to utilise those Southern rock-inspired blues bends, and you hear it in every metal band that tries to imitate his hybrid thrash-picking. Dimebag is everywhere.”

The early 90s were a time of great uncertainty in metal. Metallica’s Black Album triumph aside, our world was in a state of flux and in dire need of a hero to lead the charge into the future.

Dime provided that vital service with an insouciant flair, making mainstream metal much heavier than ever before while always exhibiting a sublime gift for writing crushing riffs and melodic parts that were as memorable as they were inventive.

Most of all, Dime’s guitar sound sparked a revolution of its own, paving the way for the sound of virtually every mainstream metal band that followed in Pantera’s imperious wake. But beyond the technical details of Dime’s playing style, he was also a consummate showman – a real, red-blooded, three-dimensional rock star who ruled the stage with supreme confidence.

“He’s had a huge influence on everybody,” says Alter Bridge guitarist Mark Tremonti. “Dime and Zakk Wylde were the two biggest commercial rock guitar players at the time. Losing Dimebag was taking away one of the top two or three guitar players out there at the time.

"There are a lot of great unknown guitar players playing in their bedrooms, but there are few out there doing it and filling arenas. His loss really took something away from the guitar scene. He wouldn’t let you sit there and daydream at a show. He’d wake you up every two seconds. He was such an exciting player. He was wild.”

As original as he was, there were still traces of classic and thrash metal in songs like Domination and Cemetery Gates, of course, but rather than adhering to the unwritten rules of metal guitar, Dime played in a way that suggested a blissful disregard for limitations and a wide-eyed adoration of music’s endless possibilities.

By the time Pantera recorded Vulgar Display Of Power, he was surfing an unstoppable wave of creative inspiration. From the devastating crunch of Mouth For War and Walk to the lavish intricacy of Hollow, that album comprised a sustained barrage of goosebump-inducing masterstrokes that resonate with charismatic power to this day, and the same can be said of the entire post-Cowboys Pantera catalogue. Dimebag’s legacy is vast and the music he made will live forever.

“Heavy metal was born in Europe, basically, and it has a European vibe, which comes from classical music,” notes Zoltan. “Even if you don’t like classical music, you can’t help but be influenced by it. But Dimebag pissed all over music theory… he didn’t give a fuck. Like Eddie Van Halen and Jimi Hendrix, Dimebag just played what he felt. If you never saw him play, you missed the magic.”