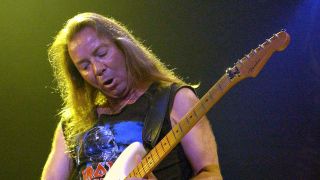 As Iron Maiden’s last album The Book Of Souls hit the shelves, Dave Murray fans were salivating at the prospect of his latest contribution to the Iron's catalogue, The Man Of Sorrows. To tide us over to the next one, we've thrashed out a list of the ten best Iron Maiden tunes co-written by the Blonde Bomber, which coincidentally doubles up as a playlist of Iron Maiden’s ten most underrated songs.

Still the only Maiden song solely credited to Murray, this poignant tale of a man in love with a cut-price sex worker is a bona fide classic from the band’s early days, remaining a firm fan favourite despite its long absence from the live set (though they dug it out for their Early Days tour) and perfectly exemplifying early Maiden’s pioneering blend of spiky punk aggression and the dexterous tempo-shifts of prog, plus a gorgeous blues-ballad mid-section. And who’d have thought easy-going, baby-faced Davey could have penned such hilariously politically incorrect lyrics about ‘bloody whores’ and ‘off-colour drawers’.

An addictive, punchy two-and-a-half-minute heads-down gallop, Twilight Zone was a Top 40 non-album single (later added to the Killers CD reissue) sung from the perspective of a spirit haunting his ex-lover (the sleeve art excitingly depicts the couple as Eddie and Charlotte). There’s no solo to speak of, but with such breathlessly wordy verses and tight ascending screams, it was one of three songs chosen to test Bruce’s vocal prowess at his 1981 Maiden audition – although outrageously, he’s never sung the song live.

A muscular, brooding mini-epic about the coming of a new ice age, Total Eclipse was surely a natural fit for the mystical, apocalyptic vistas of The Number Of The Beast LP. Strange, then, that it ended up relegated to b-side status instead of the chirpy throwaway Gangland. The band now admit this was a mistake, and Total Eclipse – which was strong enough to make the setlist for the European leg of the Beast On The Road tour – takes its rightful place as the penultimate song on the CD reissue.

Opening with one of Dave’s beautiful mellow intros – delicate and melodic but charged with ominous atmospherics – Still Life is yet another of Iron Maiden’s most unfairly overlooked first-class songs. There’s a textbook run of twin-guitar harmonies, bewitching solos and a sense of musical development in tune with the spooky narrative of a man hypnotised by ghosts beckoning him to a watery grave. The band dug it out for the UK leg of the Seventh Tour Of A Seventh Tour, but scandalously dropped it from their 2012-14 Maiden England Tour setlist.

We never met anyone who didn’t love Deja Vu. Dave’s trademark gorgeous bluesy intro has an understated, melancholic mystique, there’s an an incisive hook and a glittering procession of infectious, flamboyant six-string melodies, plus Bruce’s unusually venomous vocals and Nicko’s insistent, dynamic drumming that could make the dead headbang; with just the one bass drum, McBrain here ascends to the realms of the rubber-ankled superhuman. And yet somehow, shockingly, Iron Maiden never played Deja Vu live.

Public Enema Number One (No Prayer For The Dying, 1990) Written by Dave Murray and Bruce Dickinson

There is a solemn, reflective maturity about Public Enema Number One that belies its terrible title, plus a poignant, epic chorus, propulsive rhythm and a distinctly nocturnal atmospheric chill that should make it a shoe-in for open-air festival set lists. It was widely performed during the No Prayer On The Road tour (but then so were The Assassin and Hooks In You, and they’re questionable), but hasn’t been seen since.

Judas Be My Guide (Fear Of The Dark, 1992) Written by Dave Murray and Bruce Dickinson

Another Davey co-write that Iron Maiden have never played live, yet when the officially-endorsed tribute band Hi-On Maiden premiered their version of Judas Be My Guide the place went absolutely shit-nuts. Not hard to see why: a three-minute righteous rollicking rock ‘n’ roll rampage with an uproarious singalong chorus and lashings of creamy guitar licks plus a euphoric Davey solo, it was seemingly tailor-made for a live environment that never got to see it.

Dave co-wrote three songs on Bruce and Adrian’s comeback opus – a personal record, and no mean feat as the band now contained four other prolific, talented and competitive songwriters. Of the three, it’s this sublime philosophical closer that’s perhaps the most significant, as our Davey gets to peel off five separate solos. Despite being a profoundly beautiful end to a decisive release, Iron Maiden have astonishingly never played this one live either. The campaign for a Maiden tour setlist consisting entirely of songs co-written by Dave Murray starts here!

Arguably the strongest Maiden single of the last 25 years, the concise and upbeat Rainmaker was written largely by the Blonde Bomber, before Steve added some melodies and Bruce wrote lyrics inspired by Dave’s opening guitar line, which reminded him of raindrops. Like the rest of this mint Murray playlist, there’s a deep emotional resonance to Rainmaker, and especially to Dave’s radiant solo and winsome triple-guitar harmonies.

Another irresistible blend of lush harmonic beauty, cryptic mystique, restless progressive complexity and spiky, brute-force riffage, The Man Who Would Be King seems to play a bit of a magic trick on listeners. After the first few spins of The Final Frontier, it didn’t seem to stand out from the shadows of bolder surrounding songs, even despite the noisy chaos of Davey’s mid-song backwards solo. After a while though, its understated elegance and depth ensure it blossoms into a sublime, affecting album highlight.