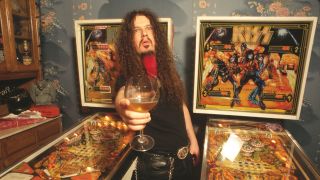 Few of us that regard ourselves as metalheads could forget the horrific news that broke on the morning of December 9, 2004. The previous night, ‘Dimebag’ Darrell Abbott had been gunned down during a show with his band Damageplan at the Alrosa Villa in Columbus, Ohio. Three more people were killed as the gunman opened fire. We mourned their loss, too, but there was no escaping the horrifying realisation that one of the greatest and best-loved musicians ever to fly the metal flag had been taken from us – and, crucially, from his girlfriend Rita, his family and his friends – at the sickeningly early age of 38.

Very much a legend in his own lifetime, Dimebag had grabbed heavy music by the scruff of the neck and dragged it, kicking and screaming, into a new era. Without his unique and enduring contribution to metal, the musical landscape of 2014 would look entirely different, not to mention a lot less exciting. Dime bent and broke the rules at will and we all went along for the ride, because his dedication to our world and our values was absolute and beyond dispute. The entire metal scene reverberated to the hollow, chilling clang of the revered guitarist’s untimely passing.

What followed was a prolonged period of pain and confusion, not helped by the coincidental publication of an interview with former Pantera vocalist Philip Anselmo (published before Dime’s death) in Metal Hammer in December 2004, wherein he said some pretty brutal things about his former bandmate and the state of Pantera towards the end of the band’s career, exacerbating the somewhat sour relationship between himself and Dime’s grieving brother, Vinnie Paul, in the process. Of course, Anselmo has since made it perfectly clear just how much love and respect he has for his fallen comrade and those old wounds have begun to heal. As we commemorate the 10th anniversary of Dimebag’s death, everyone involved has moved on to such an extent that the rumours of a much-hoped-for Pantera reunion – with, most of us assume, Zakk Wylde replacing his old friend – continue to gain momentum.

Time will tell whether the remaining three Pantera members will ever share a stage again, but the fact that we still care enough to speculate about such an unlikely reunion says it all. So many of the songs Dime wrote with his Pantera brothers are immortal classics: to hear them performed again would be a moment to cherish and a chance to celebrate the life of a true musical hero. But perhaps the most important thing to acknowledge on this sobering anniversary is precisely how vast Dimebag Darrell’s impact and influence on metal has been, even in the years since his death.

Tributes will always flood in when a popular musician passes away, of course, but Dime was so much more than just another hard-working musician with a big fanbase. Aside from his colossal contribution to the evolution of metal, his arsenal of immortal and inspirational riffs and solos, and his hard-earned reputation as the ultimate heavy metal party animal, Darrell Abbott was a force of nature, a tornado of creativity and a living symbol of everything that metal fans hold close to their hearts. He lived, breathed and shat music like no one has, before or since. He spread good times and the inevitable legacy of brutal hangovers wherever he went. Most of all, Dimebag was one of us, albeit with a level of instinctive and natural talent that most of us could only dream about. He shared that talent with us, always looking like he was having the time of his life, and we loved him for it.

Ten years have passed terrifyingly quickly and the world has changed a lot during that time, but one thing that remains is the metal world’s love for an all-time great. Over the next few pages we dig deep into Dimebag’s life and times, speaking with his family, his friends, his fellow musicians and some of those who cite the great man as an unerring inspiration. We will never see his like again. Brother Dime, we salute you.