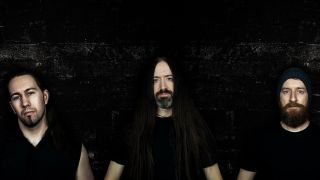 Purveyors of heart-heavy doom-death, Nottingham’s trio Twilight’s Embrace are due to release a new, self-produced four-track EP, Penance - featuring a cover of Paradise Lost’s It’s Too Late - on February 23rd, and they’re heralding its imminent arrival with a cinematically shot video for the track Dying Earth.

Clocking in at six and a half minutes, but guaranteed to lodge in the soul for a good deal long than that, this is both a sonically and visually epic experience in the great northern UK tradition of writhing riffs, leads stitched from the rays of dying suns and gruff vocals that wring dignity from despair,

Directed and produced with no little finesse by Eric Revill-Dews of Bigger Boat Film, Dying Earth was shot in snow-swept Derbyshire hills and forests, depicting what could be a barren, The Road-style eco apocalypse or a rambling venture gone wrong, culminating in an act of catharsis that is likely to put a chill in your bones.

“I’ve always been fascinated by the ways that different cultures have historically deified and worshipped the earth and the elements,” says vocalist Andy Walmsley, “and while I’m not advocating for a return to that form of primitivism, I do still wonder whether, in our endless pursuit of progress and personal gain, we haven’t lost something, our sense of our connection to the world around us. That’s what this song deals with - the realisation that we may have lost something important, and that it’s simply too late to get that back and undo all the damage done.”

Be forewarned, but most of all be spellbound by the despondent might and panoramic vision of Dying Earth below!