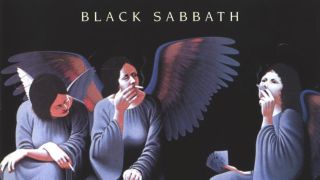 Ah, 1980. Perhaps the most significant year in the entire history of metal. Look at what it gave the world. The Monsters Of Rock Festival was founded at Donington. The New Wave Of British Heavy Metal stormed the barricades. And there were landmark albums from AC/DC (Back In Black), Motörhead (Ace Of Spades), Iron Maiden (their self-titled debut), Judas Priest (British Steel), Def Leppard (On Through The Night), Saxon (Wheels Of Steel and Strong Arm Of The Law)...good grief! It provided multiple orgasms for every metalhead.

Oh, and let’s not forget the rather significant contribution made by Black Sabbath, with a more than decent record called Heaven And Hell.

The runes, though, weren’t exactly cast in the band’s favour, as the 1970s faded over the horizon. Seemingly well past their prime, Sabbath had finally ended a two-year debacle with Ozzy Osbourne by firing the charismatic frontman; he’d become so erratic and unreliable that the band had actually rehearsed with a new singer, Dave Walker, following their 1977 tour for the Technical Ecstacy album. However, the maverick madman did return in time to record 78’s harrowingly mediocre Never Say Die, before the inevitable split left both Ozzy and Sabbath facing uncertain futures. No, let’s rephrase that. Most people were convinced that we’d heard the last of the out-of-control singer, and that Sabbath were in permanent, irreversible decline.

For guitarist Tony Iommi, this was a period of instability that he never expected to be resolved in such a subsequently spectacular fashion.

“We started putting together ideas for a new album in Los Angeles, with Ozzy,” Iommi explains. “At the time, we didn’t have an album title, just basic ideas. But it rapidly became obvious that Ozzy wasn’t up to the task. He was struggling with all sorts of addiction problems – alcohol, drugs and so on – and it was all getting on top of him. Not that the rest of us were living like saints, but he was a lot worse.”

Given their seeming inability to move forward with a new record at the time, Iommi began to think in terms of doing a different project, one removed from the Sabbath sphere. At which point he contacted former Rainbow singer Ronnie James Dio.

“Ronnie and I discussed some ideas, and it really went from there. Geezer [Butler, bass], Bill [Ward, drums] and I decided we had to get a new singer in for Sabbath. I’d been talking to Ronnie, and it made sense to go with him.”

With hindsight, of course, the addition of the richly toned Dio appears so logical. But, at the time, it was slammed as a major risk. However, Iommi was amazed at just how smoothly and quickly everything came together.

“We just fell into a groove. In fact, I’d have to say that we’d never been as prepared when we finally went into the studio. In the past, none of us had been quite sure what Ozzy would end up singing, but with Ronnie we had a really good idea.”

So, two myths can be shot down right now. There are no demos in existence featuring the Prince Of Darkness singing on early versions of songs destined for Heaven And Hell. Nor was Dio in rehearsals with the band before Ozzy was sacked. How about a third urban legend? That one Geoff Nicholls was brought into the band, because Butler was proving unreliable? Now, this does have legs…

“Geezer was dealing with a lot of serious issues at the time,” reveals the master guitarist. “And we didn’t know whether he’d be in the right frame to record the album. In fact, Ronnie played bass when Geezer flew back to England to finalise his divorce.

“I knew Geoff through his previous band Quartz [Iommi produced their self-titled, 1997 debut], and so I asked him to come in and do some bass lines for us when Geezer’s commitment was in doubt. But, in the end he sorted himself out, and Geoff stayed with us on keyboards [for pedants, Nicholls played guitar and keyboards with Quartz, not bass].”

Others have suggested that original Rainbow bassist Craig Gruber is featured – uncredited – on the final album. But this, again, is wide of the mark.

Apart from the recruitment of Dio, the other major change came with the arrival of producer Martin Birch, the first outsider to work with Sabbath in the studio since Rodger Bain on 1971’s Master Of Reality.

“We felt that bringing someone in could really help focus the ideas. It was Ronnie who’d recommended Martin, as they’d worked together in Rainbow. What he brought in was an extra dimension to the songs. And we also recorded very fast. The whole process went so smoothly. We’d been used to taking longer and longer to record, with things getting out of hand. But this time, it was a joy to be in the studio.”

Iommi’s recollection is that the first track to be recorded was the title song itself, although Children Of The Sea was the first song that he and Dio wrote for the album.

“I believe we used all the songs we wrote for the record,” he insists. “Nothing was actually put on tape, and then left off. So everything is there.”

While many doubted the move towards Dio and a new musical direction, Iommi had no such fears.

“It was all so exciting and challenging. We were doing things that, quite frankly, would have been beyond us with Ozzy. He wasn’t that sort of singer. But with Ronnie, there were so many more options. It really did feel like we were starting all over again. And we all knew when the album was finished that it was something special. It felt right for the time, and was Black Sabbath as people had never heard us before.”

But that of itself carried an inherent danger. How would diehards take to an album without Ozzy, yet one that featured an American fronting the most British of all heavy bands? Did Iommi have any worries about public acceptance?

“Sure, there was a definite concern about the fans, and whether they’d go for what was a new Sabbath. But we had so much confidence in the strength of what we had, our belief was that we’d ride through any criticism. Admittedly, there were gonna be some fans who’d have a go, because Ozzy wasn’t there. But, then, whatever we’d done that was guaranteed to happen. But, we felt confident the majority of fans would go with us, and that we’d pick up more as well.”

Recorded at Criteria Studios in Miami and Studio Ferber in Paris, Heaven And Hell was released on April 25, 1980. And the cynics were blown away, in a cacophony of critical acclaim and chart appeal. The album made it to no.9 in the UK and no.28 in America. It was the band’s best chart performance since 1975’s Sabotage.

But this was only the first part of the Sabbath plan to re-educate people to the ways of the band in the1980s. Now, they had to take it out on the road, mixing up songs from the new album with those from their past. The tour started on April 17, in Germany. “We knew that was also gonna be a serious test, but it helped that Ronnie was open to trying everything. He was prepared to do any of the songs chosen from our years with Ozzy. Of course, it was very different for him to be heard singing anything closely connected to Ozzy, as opposed to the new stuff. But we met this head on, and I believe we made it work. The crowds were big and, mostly, very supportive.”

But, four months after the lengthy world tour got underway, it was almost derailed, when Ward quit, due to health problems.

“Bill was really struggling with the demands of being on the road, and our schedule. His health was a major issue, and he was also dealing with family problems. So, Bill left after we did a show in Albuquerque during August.”

In his place, the band went for Vinny Appice, younger brother of the more celebrated drummer Carmine Appice.

“I think it was Ronnie who suggested we go for Vinny,” says Iommi. “We knew about Carmine, but had never heard his brother before. So, we listened to some of the stuff he’d done in the past, liked it and got him down for a rehearsal. I remember we had a few days off before the next show in Hawaii, so it seemed like the ideal time to try out Vinny, and he fitted in really well. Mind you, there was one odd incident. When he came down to audition, Vinny’s kit was really small. I just assumed this was his practise one, which was easier to drag down for the occasion. But when we got to the Aloha Stadium for his first gig, I was amazed that he had the same kit set up on Bill’s huge riser! It was dwarfed, and I got really paranoid. It was the first time that I’d ever played with a different drummer to Bill, so I was nervous enough. Seeing how small that drum set-up was just added to my feeling that it would all go horribly wrong.”

Thankfully, Appice slotted into the new Sabbath sound and style, although there was one change to the set list when the drummer switch occurred, with Lonely Is The Word being exchanged for Lady Evil.The reason? Iommi cannot now recall – but it did mean that, throughout this tour [which finally ended on February 2 1981, in Cornwall], the only songs from Heaven And Hell not to be played live at some point were Wishing Well and Walk Away.

It’s now nearly 30 years since this album first astonished metal fans across the globe, in the process giving Sabbath a second life. Now, it’s rightly regarded as a classic, but how does Iommi view it?

“I believe it’s stood the test of time remarkbaly well, and helped to re-invent the band. As far as the songs go, it’s among the most musical records of our career. Right up there with the very best. Yes, I know there are people who still maintain that Black Sababth is all about Ozzy, but there are others who got into us through hearing Heaven And Hell. People like Dave Grohl from the Foo Fighters and his generation first heard Sabbath on this album, and from there they iscovered our past. So, it’s played a huge role in giving the band a long career.”

With the return of Heaven And Hell era Sabbath as a band in 2006 (under the name of Heaven And Hell, but featuring Dio, Iommi, Butler and Appice), several new generations of metalheads might just be about to discover the glories of this masterpiece.

This was published in Metal Hammer issue 165.