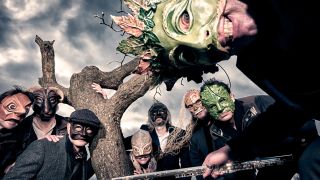 “I lived in Shropshire for years and at the Shrewsbury Flower Show I met some beekeepers who were there with their bees. I got fascinated with it and started looking into the folklore. There’s a story about a keeper who died and at his funeral, his bees left the hive and settled on the tree above the grave as they lowered him in. They just knew somehow. Bees were the messengers between the living and the dead.”

That’s why you’re meant to let bees know about important events, such as deaths, lest they desert their hives or die themselves, and this quaint tradition inspired Telling The Bees, Longdon’s beautiful song that closes Big Big Train’s extraordinary new album. Folklore takes us on another vivid journey through the band’s unmistakable musical landscape. Theirs is a green and pleasant land brushed by wistful, nostalgic breezes, a place where English history entwines with progressive rock of the highest order; a place populated, this time, by insects and brave pigeons, ancient trees and prehistoric roads, reluctant heroes and medieval giants.

Big Big Train’s successful template truly found form on 2009’s The Underfall Yard, their sixth album and the first with Longdon aboard as singer. Their subsequent English Electric releases struck a chord and saw their audience surge, with demand from their fans – their self-proclaimed ‘Passengers’ – leading to the newly expanded line-up playing three highly acclaimed live shows in London last summer.

“David is a natural,” says bassist and band co-founder Greg Spawton, who admits to “nerves and sleepless nights” before their sold-out run at Kings Place back in August. “The stage is his domain. I hadn’t even seen him play a gig since a month or so before that, when he sang Spectral Mornings with Magenta at The Borderline. That’s when I realised he’s a great performer, a strong frontman. I thought, ‘This is going to work.’”

Passengers swarmed to the shows from as far afield as the US, Australia and even Bolivia. The run was voted Event Of The Year by Prog readers in our 2015 poll, and Big Big Train landed in a creditable 24th place in our reader-voted list of the 100 Greatest Prog Artists Of All Time, snugly between Hawkwind and Tool. Wassail, their paean to southern England’s apple and cider rituals, was up for the Anthem trophy at last year’s Prog Awards, the EP of the same name even topping Amazon’s folk chart for a while.

With its English theme and irresistible chorus, Wassail nestles nicely into the songlist of Folklore. The album opens with the title track, a fitting prelude for the stories to be shared – it hoves into view on strings and colliery band-style brass, both now vital elements of the Big Big Train sound.

“Folklore is a manifesto for the album,” says its writer, Longdon. “‘Let us begin where it all began.’ It’s about the spreading of stories – first we told them around the fire, then by the printed word and later by computer and satellite. It’s about the collective conscious, but as these stories get out into the world, they become more than that. These are songs about England, about what it is to be brought up in England and to be English.”

The band has reached a position with personnel where I’d always wanted it to be. We’re late starters in a way, but we want to make the most of our career over the next 10 or more years.

Winkie is a seven-part prog epic about the first recipient of the Dickin medal, the animal equivalent of the Victoria Cross. The pigeon’s truly extraordinary 120-mile mercy flight led to the rescue of the crew of a Beaufort bomber in 1942, who had ditched in the sea after a sortie. “Obviously her funny, cute name has all sorts of connotations,” says Longdon, “but we give her the Indiana Jones treatment. The music’s very cinematic – it’s on the scale of her heroism. It’s a ripping tale of derring-do. Greg’s bass playing is ridiculously good on this – he’s all over the Taurus pedals and up the dusty end of the bass neck.”

Spawton’s own compositions, such as the beautifully sprawling London Plane and Along The Ridgeway, are very much rooted in the land, and in his own past life as an archaeologist. “London Plane started with the song title,” he says. “What an unusual combination of words. It’s a very robust tree that was first cross-pollinated in 1600 and since then it’s dominated the London skyline. That gave me a point of time, a 400-year period which allowed me to tell the story of London – the river flows by, and the city grows around it. It’s a history song with an interesting slant.”

The Ridgeway is a prehistoric pathway, probably the oldest in England, that stretches from Wiltshire to the Thames. From this fertile ground emerges a proggy exploration of the history and folklore around it (Spawton remembers the brass players scratching their heads at the odd time signatures), spreading into a monumental instrumental, Salisbury Giant, with Spawton channelling Michael Nyman during the composition.

“Greg’s very organised and methodical,” says violinist and string arranger Rachel Hall. “He’s brilliant at keeping everyone on track, and we definitely needed that on this album because we were on a mission.”

Like Longdon and Rikard Sjöblom, Hall was brought in for the English Electric sessions by the band’s long-standing engineer and prog notable, Rob Aubrey. She’s since been inducted into the band proper. “David’s the soul of the band in a way,” she says. “He’s always having a laugh. But there are no egos whatsoever in the band. Everybody’s thinking about the songs.”

According to Sjöblom, he and Dave Gregory were left to work on the guitars between them. “Greg and David wanted us to make the parts our own. Dave was the one who said, ‘You take this solo,’ and I was open – there was never any elbowing! I try to be intuitive as to what Greg or David are after – I try to catch the vibe and still put my stamp on it. The Wassail EP was the first thing I did and it was tricky – I just followed their demos. For this album, I felt I should follow more of my own ideas.”

“It’s a joy to have Rachel, Rikard and Danny in the band,” says Greg Spawton. “They really help us get the music to the next level, to amp up the tingle factor we’re aiming for. Rachel and Danny are highly trained, and sometimes they’ll ask me, ‘What do you mean by this?’ Danny says my music’s ‘ambivalent’ – it’s not always clear which key it’s in. Which is a very progressive thing, isn’t it?”

Indeed, Spawton’s penchant for golden-era bands like Genesis, PFM and Van der Graaf Generator is never far from the surface, chiming harmoniously with Longdon’s influences, from the Faces to The Who to Bowie, who inspired the lyrics for the stunning, plangent track The Transit Of Venus Across The Sun. The album’s overarching theme came out of a mere one-hour conversation between the two men. In a typical moment of synchronicity, they realised they’d been working on songs separately that had a common, folkloric theme and would work together as a piece. With momentum from Kings Place, the music came together rapidly and was recorded at Real World and English Electric Studios in January. Given the coherence, quality and subtle complexity of the finished product, it’s a remarkably fast turnaround.

“The thing is, David’s like a brother to me really,” says Spawton. “We were born exactly one month apart, we’re on very similar wavelengths, we have similar interests, and a clear understanding of how the other works and what the other might be thinking. The music actually comes together quite quickly.”

The stirring Brooklands is typical of Big Big Train. Set against an intricate musical backdrop, it’s the story of racing driver John Cobb, who died in 1952 on Loch Ness while attempting to break the world water speed record. “I just heard the name, Brooklands,” says Spawton, “and looked at the history and found Cobb’s story. It’s incredibly stirring, incredibly English. We’re quite good at finding quirky stories like this now. We fire them back and forth, we find them in museums. Other bands and fans even send them to us now!”

Folklore completes what Longdon calls their ‘Albion Cycle’ of albums, which began with The Underfall Yard. There are plans for another EP and another set of shows this time next year. There are also some tantalising references to an unnamed concept album further down the track.

Meanwhile, it’s full steam ahead for The Station Masters, a triple CD comprising the current line-up’s re-recording of all Big Big Train’s material prior to The Underfall Yard. It’s a testament to how definitive the current band feels that those old albums will not be reissued: once they’re gone, these re-records will carry the catalogue into the future.

“For me, the band has reached a position with personnel where I’d always wanted it to be,” says Greg Spawton. “I’m too old to be working with people I don’t belong with. There’s a line in Brooklands: ‘Where did all the time go?’ When you get to 50, you look back and think, ‘Christ, how did I get here so quickly?’ We’re late starters in a way, but we want to make the most of our career over the next 10 or more years, and leave a legacy of good recordings and memorable gigs.”

David Longdon agrees. “We’re old enough to realise how special what we have is. The rush of support we’ve had, from people rooting for us, has had such a positive effect. Could Folklore be our breakthrough record? It could be, but at the end of the day, it will be what it is, and will find its own way in the world.”

We shall keep the bees informed.