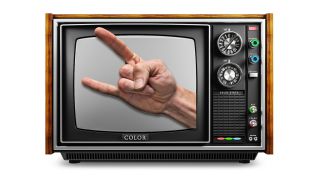 Before the invention of social media, the only way to find out what happened backstage was to somehow get back there yourself – a tall order when trailing the world’s biggest bands, walled off by a legion of security and roadies. The other way was to gorge on the best music documentaries (if there was one) about your favourite bands.

Some of the older rock docs definitely have more of a home-spun feel to them compared to newer, super-slick productions, but that’s part of their vintage charm. They represented a moment in musical history and deserve to be counted. The lucky ones have been given a fresh lick of paint with clever 4K remastering and sumptuous Dolby Atmos sound.

However, not every music doc is made equal. In other words, some are pure barrel-scraping drivel, made to cash in on a well-worn theme. You will not find one of those in our guide to the best music documentaries and films.

We’ve curated a broad church of offerings here, with metal, classic rock, punk and hardcore each playing a set. We’ve thrown in a curveball (can you spot it?), an Oscar winner and we've muddied the waters between video album and music documentary (cheers, Slipknot). Before we get to the main event, let’s take a look at the different formats available to buy, and which one is worth spending your hard-earned on…

The best music documentaries and music films: the format to buy

It goes without saying that the highest quality format you can buy now is 4K UHD, but not many music documentaries get this primo treatment. Blu-ray delivers enhanced audio and visual quality over DVDs, so if you have a Blu-ray player, don’t hesitate to buy this format if it’s available for your chosen title.

There are a small majority in our best music documentaries and music films guide that are currently only available in DVD format. They’re still worth buying – we wouldn’t have included them if they weren’t.

Don’t forget, you can also buy the official soundtracks for some of the films and documentaries featured below, treating your turntable to some new vinyl if you prefer wax to CDs. As for us, we’re saving up the eye-watering sum to buy This Is Spinal Tap on vinyl...

Metallica – Some Kind of Monster
This award-winning rockumentary was originally pegged as a promo vid for Metallica’s 2003 album St Anger, yet morphed into something much more painful and funny in equal measure.

The Decline of Western Civilisation Collection
What good would a best music documentaries guide be without the mother of all punk and metal docs? Wayne’s World director Penelope Spheeris deftly captured the high-voltage energy of LA’s hardcore punk scene in part 1, wrangling hours of footage into this breakneck trilogy.

Interviews and performances from Black Flag, Circle Jerks and others are present. Nab the deluxe Blu-ray boxset for audio commentary by Dave Grohl.

Beware of Mr. Baker
Late Cream drummer Ginger Baker is the subject of Jay Bulger’s multiple award-winning music documentary. The title references a sign outside Ginger’s South African compound, and is a nod to the drummer’s, er, combative personality.

This Is Spinal Tap
Binge on a big helping of satirical irreverence courtesy of one of the best music films ever.

Yes it’s a mockumentary, but anyone who has spent a reasonable amount of time in the music business of old will tell you that, actually, it’s pretty damn true to life at times. Especially the pomposity of some of the lead characters. Goes up to 11, indeed.

Rush – Beyond The Lighted Stage
Sam Dunn and Scot MacFayden’s music documentary chronicles the highs and lows of the prog rock juggernaut.

Buy Rush Beyond The Lighted Stage Blu-ray (US)

Bohemian Rhapsody
An Oscar winning music film that already feels as iconic as Queen themselves. Yes the writers took liberties with the truth in places, but Rami Malek playing Freddie Mercury is astounding.

The soundtrack is brimming with Queen jewels, from We Will Rock You to Hammer To Fall. Never seen Queen’s legendary Live Aid set? It’s here as a spine-tingling bonus feature. You can buy the Bohemian Rhapsody soundtrack on vinyl and CD, too.

Lords of Chaos
A semi-fictionalised account of a story that’ll never die, Lords of Chaos is gruesome. The film follows Mayhem, one of the founding bands of the Norweigan black metal scene, from inception, and doesn’t flinch away from original singer Death’s suicide, guitarist Euronymous’s stabbing, nor all those church burnings.

Not for the faint of heart, and not based on 100 per cent truth, but one for those curious about what happened.

The Rolling Stones – Crossfire Hurricane
Over a year in the making, Crossfire Hurricane, the official documentary of the band’s 50th anniversary, follows the Stones from their days as music-obsessed teens spinning scratched-up blues records, to becoming bonafide rock royalty… But not without a shit-ton of trouble along the way.

It focuses heavily on their 60s-70s period, and includes cuts from the Maysles brothers’ Gimme Shelter, making it a particular treat for more nostalgic fans.

The Slits – Here To Be Heard
‘These guys didn’t know whether to fuck us or kill us, they were so confused…’ So said the inimitably cool Viv Albertine, guitarist in The Slits, when interviewed for Here To Be Heard.

Unquestionably the best music documentary for anyone curious about what it was like to be in an all-female punk band that counted the Sex Pistols as buds and Patti Smith and Dionne Warwick as early influences.

Buy The Slits Here To Be Heard on DVD

The Last Waltz
Directed by Martin Scorcese and lionized as one of the best music documentaries of all time, The Last Waltz captures The Band’s farewell concert on Thanksgiving Day 1976. A galaxy of rock, blues and folk greats make an appearance, including Eric Clapton, Muddy Waters and Joni Mitchell.

The jaw-dropping live show is interspersed with interviews, and is raptly fascinating as a snapshot of a truly grand moment in music history. Some tasty extras with the Blu-ray edition, folks.

Pearl Jam – Twenty
One for the most devout Pearl Jam fans, and also a good grounding for newcomers. Cameron Crowe directs this 20th anniversary account of the seminal grunge rockers, drawing upon 1,200 hours of rare footage, sandwiched with new interviews and live footage.

The music is anthemic, naturally, with Twenty quietly lending itself as a love letter to one of Seattle’s biggest success stories.

Slipknot – Disasterpieces
Want to know what it’s like playing in Slipknot in front of a rabid crowd? Here’s your chance. Disasterpieces centres on the band’s insane London Docklands Arena gig in Feb 2002, and throws in a dollop of candid backstage footage.

Disasterpieces is notable for its FPV angles, created by the film crew strapping a camera to each band member’s mask and one on Mick Thompson’s guitar.

Sound City
One of the best music documentaries for taking a peek inside the California-based recording studio that gave birth to a staggering amount of gold and platinum albums, including records by Mastodon, Guns N’ Roses, Red Hot Chili Peppers, Tool and Rage Against The Machine.

Dave Grohl narrates and interviews a stellar cast of artists associated with the studio, such as Josh Homme, Rick Rubin, Corey Taylor and Trent Reznor.

A classic cut for every rock ’n’ roll fan’s collection.

The best music docs and films on Netflix

...and on Amazon Prime Video

No Netflix? Start a free trial today
Netflix is your gateway to endless TV shows, music documentaries and epic movies like The Dirt – perfect for those gig-less evenings. Sign up today and enjoy a free trial.View Deal

Start streaming with Amazon Prime Video
Stream and rent the biggest and baddest shows and movies around. Sign up to Amazon Prime for £7.99 and get access to all this good stuff and more.View Deal

About the author
Claire Davies is a music, lifestyle and tech journalist, and has written for Total Guitar, MusicRadar and T3 among other brands. She’s interviewed many of music’s most prodigious and notorious, from Tony Iommi and Slash to Robb Flynn and Nikki Sixx.