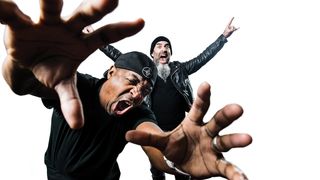 In an age where nu metal’s influence runs riot and a generation raised online has access to more varied sounds than ever, it’s easy to take the cross-pollinaton of metal and hip hop culture for granted. Back in the summer of 1991, however, such genre-mashing was practically unheard of. Over a decade before the commercial peak of Linkin Park and Limp Bizkit, and years before Rage Against The Machine’s funk metal assault, the roots of rap metal were being sown by two bands raised in the streets of New York, from scenes that, on the face of it, couldn’t have been more different. While Run-DMC and Aerosmith may have got the rap-rock ball rolling five years earlier with Walk This Way, it was when a young Anthrax hooked up with hip hop pioneers Public Enemy that history was truly made. Producing a fresh, thrashed-up take on Public Enemy’s 1988 single Bring The Noise, the collaboration spawned a hit single, a tour and a sound that would change heavy music. A quarter of a century later, we sat down with Anthrax’s Scott Ian and Public Enemy’s Chuck D to get the story on the spark that started a music revolution.

HOW DID YOU FIRST HEAR OF EACH OTHER?

Scott Ian: “I was a huge hip hop fan. I listened to Run-DMC as much as I listened to Iron Maiden. Public Enemy quickly became my favourite band after hearing them for the first time in 1986 or 1987, so I’d had the idea of working with them for years.”

Chuck D: “I was shown a copy of Melody Maker in1987, and the first page had the Monsters Of Rock festival at Donington in Britain, and in that picture was Scott with a Public Enemy shirt. I was like, ‘Whoa!’ I reached out and said, ‘Thanks a lot, you guys,’ because that was awesome.”

Scott: “The whole thing was organic, the way it came together. It just came out of mutual respect after Public Enemy mentioned us in the original Bring The Noise. Getting to hear that line [‘Wax is for Anthrax, still it can rock bells’] was a giant kick in the ass. We couldn’t believe that our favourite rap band was name-checking us in a song.”

SO HOW DID THE SONG COME TOGETHER?

Scott: “Chuck’s voice and my guitar sound made complete sense together in my brain. I thought it could be super fucking heavy!”

Chuck: “I was approached by the guys about me rapping over a version of Bring The Noise that Anthrax had decided to ‘metallise’. I said, ‘Why don’t you guys just record it? Because I already did it, you know.’ I didn’t get why I had to get down and do it again, because the original Bring The Noise was not too long before that.”

Scott: “We recorded my riff and the drums and made a fucking crushing track. We thought we’d use it for Anthrax if it didn’t work out with Public Enemy. We sent over a cassette, and Chuck called us and said, ‘We love it. How do we do it?’ We spent months trying and failing to get into the studio at the same time, so they sent us the vocals, and me and Charlie [Benante, drummer] spent a week cutting and pasting them on the instrumental tracks. A whole week! That’d take five minutes now, but it took hours and hours a day. Everybody thought we were crazy, but we said, ‘No, we’re gonna fucking do this!’ and kept going until it was perfect. For years, we never told anybody how it was done: everybody assumed that the bands were in a room together.”

Chuck: “The key to the new version was that myself and [Public Enemy rapper Flavor] Flav had vocals that cut through the guitars. In hip hop, it’s about the voice on top of the music, and we could take more ‘noise’ – as we called it – because we felt that our voices could cut through anything.”

SCOTT, YOU ENDED UP RAPPING ON IT!

Scott: “Knowing that I was going to have to rap the third verse was intimidating. I’m not a rapper! I was just a guy who loves Public Enemy. If I’m gonna get on a mic in front of Chuck, who I consider to be the greatest rapper of all time, I had to be prepared.”

AND STUFF STARTED TAKING OFF ONCE THE SONG WAS OUT THERE…

Chuck: “The video we shot was significant, because there was an equal chance that both bands would lose audiences. The hip hop audience could have said, ‘Public Enemy sold out to these metal guys,’ and the metal crowd could have said, ‘What are you doing, messing with this hip hop music?’ There was a possibility of loss. It challenged us.”

Scott: “Then we went on tour together [in 1991], with Primus and the Young Black Teenagers as the support bands. The shows were fucking awesome.”

Chuck: “The idea came about after the song was done. I did a photoshoot and an interview with Anthrax in Salt Lake City. Afterwards we said, ‘We have this song, why not do a tour?’ We made up our minds in less than five minutes. We said, ‘What can stop us? Let’s do it!’ And the tour was magic.”

Scott: “We were hoping that the crowds would be 50% white and 50% black, and open up a new world of buying power for hip hop, but that was far from the truth. Chuck predicted that itwould be 90% white, and he was right.”

Chuck: “The racial mix was predominantly white, but the tastes of the crowds were more like 70% metal, 30% hiphop.”

DID YOU REALISE AT THE TIME THE LEGACY YOU WERE CREATING?

Chuck: “It was the first time that a metal artist dared to cover a rap record. You’d had it the other way around, with Run-DMC covering a metal record [Walk This Way with Aerosmith], and us having a Slayer sample in our song She Watch Channel Zero?!, and the Beastie Boys having Led Zeppelin in their sound, but Scott and Charlie metallised hip hop. They ‘Anthrax-ised’ it, bringing it into the metal world. It was a total discovery.”

Scott: “As we played that song, we’d see a sea of thousands of people, all understanding what they had just witnessed. In a sense, we taught people a lesson, every night, and it opened the door for the music that came in the 90s.”

WHAT DO YOU THINK OF THE BANDS THAT CAME THROUGH THAT DOOR?

Chuck: “I liked some later rap metal: I enjoyed Rage Against The Machine’s music very much. But any time that record companies start trying to exploit something, it turns into something else. When Scotty and Charlie did it, it had an organic spirit.”

TWENTY FIVE YEARS ON, HOW DO YOU LOOK AT BRING THE NOISE AND WHAT IT ACHIEVED?

Chuck: “Bring The Noise was the logical evolution of a seed that was planted. Run-DMC and the Beastie Boys were the precursors, but before that there had been Johnny Lydon collaborating with Afrika Bambaataa [on World Destruction] in 1984.”

Scott: “Every generation needs its music, and nothing comes close to moving me as much as Public Enemy did. They created something new. We added a new branch to the heavy metal tree, but they created a whole tree!”