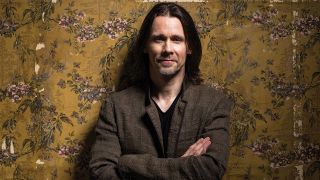 With their sixth album, Walk The Sky, dropping to critical acclaim, rock’s good guys Alter Bridge broke their two-year live silence with a jaunt around Europe and the US. Mainman Myles Kennedy stopped by to tell us about a few valuable lessons he’s learned over a career spanning three decades – such as how to find a trustworthy lawyer, what bassists really get up to at night and how it feels rocking out with Led Zeppelin.

Appreciate who helped you at the start

“At the very beginning when I was in the Mayfield Four, we had a Canadian band called Big Wreck who were really supportive to us and they were really big in Canada. They’re still together and they just put out a new record that’s ferociously good. We really looked up to those guys and they took us under their wing when we did a lot of touring up in the northern part of the States.”

“I’ve been given so many pieces of advice over the years but the one that had the most positive effect was to make sure you have a good lawyer. I’ve had the same attorney since the Mayfield Four – she was the first real music attorney I ever had in 1997 and I’ve been with her ever since.

"We’re like family now. I know she’s always looking out for my best interests and she’s awesome. If you can find someone you trust with your life in this business, hold onto them for dear life and don’t let them go.”

“I’d tell a younger version of myself to practise a little more before you go and record that record you made in a weekend thinking it was just going to be a little demo, because you have no idea that it will still be making the rounds 20 years later. I went to everybody, ‘Hey, we’re doing this little record for the weekend, come on down,’ and next thing I know, it’s this hot commodity on eBay!”

“We’ve taken a few different approaches for Walk The Sky, one of which is that we don’t have as many of the long, epic songs. We have one that’s five or six minutes long but other than that we tried to keep the arrangements focused and pretty crystallised.

"The other element for a few of the songs is that Mark [Tremonti, guitars] and I were really into the idea of bringing some John Carpenter-esque 80s synth vibe. There’s an eerie element he’d bring to films, so we were experimenting with that, which defines this record to some degree.

"When you start integrating keyboards into a riff-oriented rock band, things can go wrong. I remember bands in the 80s trying to do that. The 70s were all about guitars and the 80s brought a shift, so some bands made it work and others went too far and people turned on them. We don’t want to be one of those.”

“I like writing on the road because it gives me something to do. Last year and this year, I pretty much lived on the road and I’d start to get really bored in hotel rooms, so it kept me out of trouble.

"Mark and I are still the primary writers on this new album but it was certainly challenging because we couldn’t be in the same room together for a lot of the time when the genesis of the new songs came into being, so we were doing our demos separately while I was touring with Slash and while he was on the road.

"Where I used to get with Mark and see what happens, this time I’d be in a hotel room and I’d try putting a bridge with a verse and a chorus I had into the demo to see what happened there.

"Often that’d end up sticking and we’d have the whole song pretty much finished, then we’d get together and everybody would add their vibe to it and change the drum parts. I definitely didn’t put any bass on because I didn’t have a bass while I was on the road, so Brian [Marshall] had free rein.”

“You can’t please everyone! That’s definitely something I’ve learned as the years have gone on. Ultimately, you’ve got to do what works for you. There’s always one guy there with his arms folded or his finger in the air.

“After the solo record Year Of The Tiger last year and having no idea that would end up doing what it did, I’d say three bands is enough. I feel the most comfortable in the acoustic realm, and the whole experience for the solo album was interesting. I’ve got friends and family that knew me for years and when that record finally came out, they were like, ‘That’s the Myles I know.’”

Take the party back to the tour bus

“With us, it’s like touring with a bunch of 10-year-olds. When we get back on the road, I’m gonna embrace the late-night drinking sessions. I get worried about Brian on the road.

"Ever since I’ve known him, he’s had this habit where he’ll go to bed not long after we get on the bus, but then he’ll get up two hours later, go to the candy drawer, start eating candy and sit around watching a bit of TV, then he goes back to bed. He gets up again a few hours later and eats more candy… I don’t know how he does it!”

If all else fails, become a teacher

“If I hadn’t found music, I probably would’ve been a school teacher of either English or History. I’d probably choose the revolutionary era because I was fascinated by that as a kid. It could’ve been because I was born in Boston where a lot of that stuff took place; I was really interested in the history of the area.

"If I was capable of doing it, I probably would’ve been an architect but I wasn’t smart enough. I love that stuff but I’m terrible with math so I don’t think it would’ve been a good idea.”

“We used to have a certain soap at home and I recently found it in a hotel while I was on tour with Slash And The Conspirators. This hotel chain had the exact same soap we used to have! There was a moment where I opened it and smelled it and it immediately reminded me of home.

"So I took all the soap that was in there and I’ve been using it sparingly ever since because it reminds me of home every morning when I wash my face with it.”

Religion can sometimes be useful

“One of the good things about growing up in a Christian family was that it certainly instils moral concepts and beliefs that you really should abide by whether you have religion in your life or not.

"Be good to one another and love one another, it’s pretty simple, it’s not rocket science. I used to see this guy dressed as Jesus crowdsurfing at our festival shows in Orlando, Florida… it was like watching the messiah being pushed around on top of the rest of the crowd.”

“The secret to staying together is learning how to listen to each other, communication and keeping that channel open. If things are starting to fester, then talk about it, [otherwise] that’s how a lot of bands end up breaking up.

"Things never really get heated in this band. If there’s some things that are happening that you’re not jiving with, get it out in the open and discuss it.”

Everything happens for a reason

“Jamming with Jimmy Page, John Jones and Jason Bonham [when auditioning for a new project in 2008] was such an awesome experience, just to be in that environment for the week, or however long it was.

"You can say the same for the project with Velvet Revolver, because when you get a group of these iconic players together minus members that people are used to hearing them with, there’s always a level of expectation that the fanbase is going to have, which is certainly something you have to take into consideration.

"I got just enough of a thrill, which is good enough for me. I remember thinking as we were jamming that it felt like just four guys in a room jamming these songs, there was something really special about that. I remember thinking at some point that once this is out of this room, it’s a completely different animal, so I’ll just take it and enjoy it.”

Alter Bridge will be playing at this year’s Rocklahoma, which takes place at Pryor Creek Music Festival Grounds in Pryor, Oklahoma – just outside Tulsa – on May 22-24.

Alter Bridge: Walk The Sky
Alter Bridge released their new studio album Walk The Sky in October 2019. It'll features the singles Wouldn't You Rather, Pay No Mind, Take The Crown, In The Deep and Godspeed.View Deal