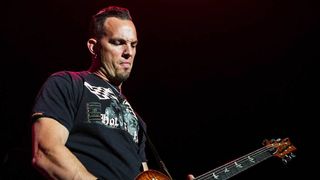 Some musicians take four and five years between albums. Not Mark Tremonti, who when he’s not issuing records with his band Alter Bridge also works double time pumping out music with his side band, Tremonti.

Last year, Tremonti released the appropriately named Cauterize, a pulverizing collection of dark-hued speed metal, and he’s now following that set with a more musically diverse companion disc titled Dust. Both records were recorded at the same time, but Tremonti decided to split them up into separate releases.

“I could have put out one giant album, but that would have made no sense,” he explains. “Whenever bands put out long records, a lot of the songs get lost or aren’t given their proper due. I grew up on records that had eight or 10 songs on them, and I always felt like that was plenty.”

While recording, Tremonti made no distinction between the tracks and gave no thought to the possibility that he was prepping two releases. After the songs were mixed, however, he saw two wholly different albums emerging. “I sat down and listened to everything, and I noticed one set of songs that were darker and gloomier, and they became Cauterize,” he says. “Then I had this other batch of tunes that, while still heavy, were a little lighter in mood, and that became Dust.”

Tremonti doesn’t attempt to tailor his writing for either of his two bands, but he has noticed that some of his more lightning-fast songs wind up in the canon of the group that bears his surname. “The guys in Alter Bridge tend to not go for the songs that are speed-metal-y,” he notes. “That’s OK, because I have this other home for those tunes. No matter what I’m writing, I try to put my best foot forward.”

Below, Tremonti runs down his choices for five essential guitar albums. “I consider these records to be the building blocks as far as my being a rock and metal guitarist,” he says. “They’re all classics, but they’ve really been important influences for me as I came up as a player.”

“This was such a critical record for AC/DC, because it was something of their comeback record after Bon Scott’s death. I remember devouring it and loving it when I was a kid. Angus Young is an amazing guitarist. To an outsider, one might think that he plays straightforward stuff, but he’s got such feel.

“The vocals, from Bon Scott to Brian Johnson, have always been incredible. The songwriting on this album has a simple beauty to it that’s just genius. But it’s all wrapped around monster riffs and memorable solos. I consider AC/DC to be one of the two best rock bands of all time.”

“Other than Kashmir not being on it, this is Zeppelin’s most incredible album. It’s got Rock and Roll, Going to California, Black Dog, Stairway to Heaven on it – the whole thing is insane. If you were to buy one rock record in the world, this is the one to get. Led Zeppelin are, in my opinion, the best rock band that’s ever existed.

“There’s the cool, classic fingerstyle stuff on Stairway, and of course there’s riffs for days all over the record. Jimmy is the master of loose rock playing. It’s all about feel with him – he’s got swagger. You can hear such attitude in his guitar work. Not many people can pull that kind of thing off. He’s one of the greatest composers on the guitar, not just for guitar parts but for songs, as well.”

“To this day, every time More Than a Feeling comes on the radio, I just have to crank it up. I love this record through and through. If you go through it and play every track, you might not know every title, but you know the song because it’s been played on the radio so much. It’s part of our DNA.

“It sounded different from everything else at the time, and a lot of that comes down to Tom Scholz’s unique guitar tone. He was this electronics wizard and he created his own effects; he worked on his own for years recording this stuff. The guy is a true pioneer. A lot of what he developed is what we use today.”

“From top to bottom, it’s one of the most solid rock records ever made. It was such a game-changer when it came out. The whole hair-metal thing was getting a little silly toward the end, and then GNR came out annihilated everything.

“I couldn’t stop playing it, and I couldn’t get enough of the videos. I remember being in a car with my father and Welcome to the Jungle came on. We were both blown away. Every song on the record is pretty phenomenal.”

“These are the guys who started it all for the scene I love the most. It’s hard to pick just one Sabbath record – all my favourite songs are spread out – but I’ll go with the debut album. Nobody had this sound before Tony Iommi. It’s almost like he and the band were possessed by some dark spirit, and this is the result.

“A lot of the metal that followed, like black metal, was directly influenced by Black Sabbath. Tony Iommi ‘s riffs are and his guitar tone are so scary and gloomy. If anybody ever asks, ‘What does heavy sound like?’, this is the answer.”

Why I Love... Celtic Frost by Mark Tremonti