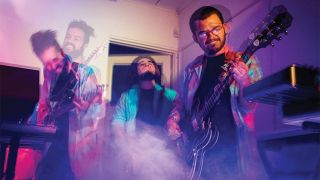 Glorious rainforests, amazing beaches and delicious coffee; it’s not hard to understand why Costa Rica has been ranked one of the happiest countries in the world. These local wonders have fuelled five-piece Jug Bundish’s creativity and turned them into one of Central America’s most exciting new experimental bands.

Based in San José, Jug Bundish was an idea hatched between old school friends in 2012. Their name – taken from a dream about a one-eyed dog – isn’t the only trippy thing about them, as their debut Quimeroide illustrates. Their psychedelic groove is as much inspired by Pink Floyd and Rush, as by Haken and Tame Impala, which makes lead vocalist and keyboard player Andrés Mora, bassist Fernando Obando, guitarist Andrés Pérez, drummer Fabricio Jiménez and guitarist/synth whizz Quico Céspedes stand tall among other local acts.

“Since we were creating original music, we decided to not be attached to just one genre,” explains Mora. “Part of our plan has always been to create songs that tell a story and walk you through different textures. One way to do this is to always be open to different ideas.”

Jug Bundish are one of a small handful of Costa Rican bands that are helping to bring irregular time signatures and spacey atmospheres to a scene where experimental noise and electronica are more popular than prog rock. Although their location has imposed some geographical boundaries on their gigging activities, should fame beckon, they’ve got a healthy wishlist of acts they’d love to tour with. “Ozric Tentacles are a big influence and it would be our dream to play with them,” says Mora. “Steven Wilson, Primus and Papadosio are other artists we would love to play with. The sound of these bands has been part of our inspiration, forging the way we live music as musicians and on a daily basis. Passion, creativity, uniqueness, experience and beauty; it would be far more than an honour to share the stage with one of these bands.”

Right now, ‘Jug’ are busy working on new material, which they say will mix their psych sounds with dancier elements. Who would have thought that a band with a cruciferous vegetable on their album cover would be so adventurous?