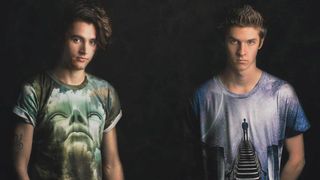 At the age of 12, Grant McKenzie watched the film that changed his life. Rock Prophecies follows legendary photographer Robert M Knight (one of the first men to capture Jimi Hendrix on film, and the last to shoot Stevie Ray Vaughan) as he celebrates rock’s great and good, and mentors an unknown musician from Honey Grove, Texas. “I just thought it was amazing that this guy took a small town guitarist and put him in front of the right people,” says McKenzie, “and now he’s doing really well.”

Cut to the next scene: it’s 2016, and that guitarist, Tyler Bryant, is touring Europe with AC/DC. McKenzie, meanwhile, is a young adult in Jupiter Hollow, a two-piece progressive metal act making a big noise in Toronto. And to complete the circle, he’s being mentored by Knight as a member of the Brotherhood Of The Guitar, an organisation set up to promote the world’s best young axemen. “It’s been amazing getting to know Robert, and to do the things I saw in the film, says McKenzie.”

The other half of Jupiter Hollow is Kenny Parry, an 18-year-old singing drummer/synth wizard with the voice of Geddy Lee, who McKenzie met when the two were in competing groups at a Battle Of The Bands competition. “I remember seeing Kenny perform,” says McKenzie. “His voice is so unique. I knew he’d be perfect.”

Together they sit at the centre of the Rush/Tool/Karnivool/A Perfect Circle Venn diagram, and debut EP Odyssey shows them to be a highly-skilled, occasionally ferocious pairing. “As much as we’re influenced by those bands we do our own thing,” says McKenzie. “We don’t have any boundaries to our music.”

Live, the band prefer to remain a two-piece with McKenzie on guitar, Parry singing and playing keyboards, the remainder on backing tracks, and projections filling the physical space. This may change as budgets and bigger venues allow, but it’s partly a logistical choice.

“I can fit Jupiter Hollow’s entire live show in my Volkswagon Golf,” says McKenzie. “We get in the car and we’re good to go. And we want Jupiter Hollow to take us around the world.”