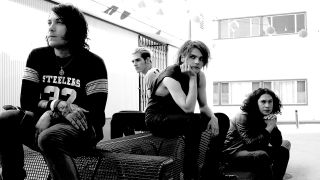 Mere months, or even weeks ago, alternative music – specifically the emo revival – seemed to be thriving.

Hayley Williams released a series of vulnerable, unique new tracks and announced a tour. My Chemical Romance got back together and announced a ton of huge global shows. Bright Eyes reunited, revealing tour dates and plans for new music.

The summer – so close we could almost taste it – would have been not only festival season, but the time for us to finally enjoy the fruits of all our furious Ticketmaster-refreshing labour. Alternative music was once again at the forefront of every music fan's mind, and 2020 looked set to be emo’s year.

But then, as we all well know, disaster struck. The novel coronavirus COVID-19 has spread across the globe causing mass chaos, disruption, and – tragically – death. It instilled uncertainty in all of us, forcing most citizens of the world into a lockdown in order to keep populations safe.

Coronavirus is affecting all areas of life. Because of that, perhaps its impact on music feels trivial or small. But the inability to travel, to form large crowds or even leave the house right now has forced venues to close and thrown future touring plans into uncertainty. Slam Dunk, the yearly UK pop punk festival, has been postponed until September. Glam emo band Creeper have postponed their April headline tour until autumn, too, for the safety of their fans.

“Persona Non Grata” is out now. Link’s in the bio to listen. Bright Eyes

Even artists who haven’t yet been forced to make a final decision have had to admit that nothing is certain. Hayley Williams was set to headline Great Escape, which has now been cancelled, and she posted recently to say that “it’s looking pretty obvious” she'll have to reschedule her other dates. Bright Eyes, upon releasing their first new song in years, posted a thoughtful and reassuring note that mentioned they were “reassessing” their upcoming tour. Larger shows, like My Chemical Romance’s tour and the Hella Mega Tour, are a little way off, but it’s unclear whether we’ll actually be crammed into a stadium screaming “I’m not okay” with 30,499 other people anytime soon. In total, thousands of metal, rock and alternative tours have been shelved.

A delay, while disappointing to people who were counting on those shows, is a necessary move to keep all of us safe. It’s responsible. But while the entire future of the industry also hangs in balance, it’s a dark time for music.

That doesn’t mean, of course, that the emo revival is cancelled. Far from it. But like every other area of life, it’s likely to take a new, more solitary slant.

We’ve already seen emo artists making the most of their enforced time at home to broadcast from their living rooms – Death Cab For Cutie’s Ben Gibbard has been posting daily acoustic live streams to benefit hospital staff, food banks, and COVID-19 relief, singing his own songs and a mix of covers. Taking Back Sunday’s Adam Lazzara has been posting cute videos of him singing acoustic songs to his kids. Hayley Williams, confessing that her anxieties are “too weird” for live streams, joined in by posting old videos and voice memos of herself at home.

Others have taken different, less music-based approaches to connect with their fans, with Thursday’s Geoff Rickly running a Zoom book club and Creeper opening a PO Box for their fans to send them “Letters From Quarantine”.

It’s annoying watching millionaires post Instagram live videos without donating to relief efforts, but this isn’t that. Artists are scared of what the future means for their careers, and they’re using that downtime and fear to just be human. As snarky as some have been about artists doing livestream shows, for many, it’s been a welcome distraction. It’s allowed artists to show their true selves on webcam, connecting with their audience in a way that isn’t PR-managed or impersonal.

Like many others, they’re taking time to do what they truly want to, and when they return to tour in several months or more, providing venues can reopen, they will do so with a refreshed closeness to their work and their fans. The fear and isolation many of us are feeling is, in many cases, enriching social connections, forcing us to take time to make a real effort with one another.

The cancellations are affecting all artists, big and small, somewhat equalising the playing field and forcing everyone back to basics.

Today’s 2012-present show was a lot of fun! Make sure to tune in for tomorrow’s livestream at 4pm PT where I’ll be playing the top 10 songs based on your votes.⁣⁣ ⁣⁣ Today’s show was in benefit of Your Supplies Save Lives (suppliessaveliveswa.org). Washington State health care workers are running out of safety equipment to protect themselves on the front lines of the COVID-19 outbreak. If you have any, please donate your unopened boxes of masks (N95 preferred), gowns, eye protection, and gloves to keep front-line health care workers healthy so they can save lives! All supplies will be allocated to Washington State hospitals and first responders treating COVID-19 patients.⁣ Death Cab for Cutie

But what will this mean for the future of music – specifically, the future of emo? It’s impossible to tell what tomorrow will look like right now, let alone six months down the line.

Best case scenario, we get to go to these tours in autumn or next year, healthy and safe and with fond memories of connecting with artists over Zoom. It doesn’t bear thinking about the worst case.

It's possible all the time at home might force artists to work alone and take their music back to basics. Without the possibility to meet for practice, they’ll be in much the same position as a young Conor Oberst, for example, sitting in his basement with just a guitar and microphone.

This is essentially the opposite of how many older alternative artists have been working throughout the recent revival. Many of those artists have actively expanded their scope since reforming, putting out ambitious, huge songs, like Bright Eyes’ latest track Persona Non Grata, which includes the use of bagpipes (!). Hayley Williams’ bold, unique Björk-esque new tracks from album Petals For Armor and their accompanying visuals hinted at a huge new era for her work. My Chemical Romance selling out stadium show after stadium show was unprecedented, and confirmed that they’re bigger than ever.

Self-isolation could change all of that and see a major surge in moody lo-fi, bedroom, DIY emo, even from larger acts who seemed too old for angst. With only the internet and zero high-tech recording equipment available, artists may opt to release new music on Soundcloud or other methods directly, harking a return to Myspace-era distribution methods.

There is no doubt that we are living through a huge, historical moment, whose lasting impact on our collective psyche is untold. It has already affected all areas of our lives, and that will only continue.

Its impact on music might only be a small part of a massive story, but one of the greatest motivators for modern alternative music has been political disruption – all the way from civil unrest and city blues through to anti-fascist 70s punk and the music which inspired by the Bush era and 9/11. It seems likely that art, especially emo music, will be born out of this crisis, but there’s no way of telling for sure.

The only thing we can truly rely on is the complete lack of certainty right now – that we're all just trying to stay safe, be kind to ourselves, and look out for one another. Daily livestreams might signal a return to emo’s DIY, back-to-basics core values, or they could be nothing more than a pleasant, brief distraction from terror.

We're all equal in our loneliness and anxiety, connecting equally with our worst fears and the things we love most. It’s terrifying, but it's the perfect foundation for emo.