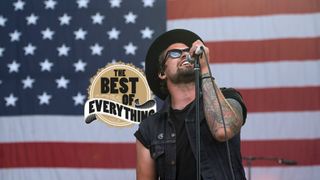 I’m really hooked on the new songs right now, so going through the catalogue and thinking about the older stuff is a little bit difficult for me, because these new songs are ones that I’m really proud of and they’re all I want to talk about. And I’m looking at this as songs that Adam today would go back and listen to. It’s also hard for me to listen back to anything I was singing back in the early days because I’m like ‘Why would anyone like my singing voice?!’ – it’s like hearing a message you’ve recorded and you’re like ‘Eeeeurgh! That’s not what I sound like!’ The first two records – and especially on the first one – I was just yelling through everything and hoping the notes were right, so it’s hard for me to go back and listen to a lot of that. But I’m in no way trying to discount it or anything like that.

But you also have to understand that you’re also saying that, out of all these Taking Back Sunday records, out of these 60 or 70 songs, give me just 10. If we were to sit down with every single one, I could tell you there’s not one that I’m like ‘Oh, this is the fucking worst, I hope no-one wants to hear this ever again!’ There’s not one song I feel that about, because they’re all a part of me, and I’m a part of them.

This song is on the new record, and this is where I want to go. Something clicked with this record – and I’ve realised this for some time now but I’ve had a hard time putting it into practice – with this whole idea that, as a singer, to express a certain emotion you don’t have to just yell. There’s a smarter way to do it. And I think this one is a real dynamic example of that.

Sleep was a b-side from Louder Now and it’s dope! It kind of has this sway to it, but for some reason it just felt like it didn’t fit with the other songs so we kept it as a b-side. But I just love this song. And then Brooklyn is another b-side from Louder Now and it has this real floaty, airy pre-chorus and then it’s upbeat but dark. It’s basically all the things I like in art all right there. I don’t regret not having them on the record, though, because when you listen to everything down, they just didn’t really feel like they fit. But I regret that not more people know about them, but then that also falls on us, too, because if we want more people to know them, we should start playing them live, regardless of what anybody thinks.

This song is sick! I’m pretty sure Mark [O’Connell, drums] hates it, but I think it’s great. It’s a little choppy and it has a nice groove to it, and I also think the words are really great.

This is a b-side from New Again. It’s really slow and almost haunting. It was eventually released but not on the actual record. But this is unlike other things that we’ve done in that it’s a slower song but has this rolling guitar pattern that doesn’t change much. I think it’d be a good song for lying in the grass with somebody or sitting on the back porch, but again it’s one of those that not many people knew about because it wasn’t on the record.

I love this song because of the bridge, because for the bridge we just really shot for the moon. We call it ‘The Beatles Bridge’ because it’s very unlike us but it went to this place and we worked really hard to get it there and we were really stoked about it. But again, it kind of ended up becoming a deep cut on that record. Writing together again on that record, we were re-learning what the dynamic was, and specifically with this song, we were just letting everything fly and revisiting that common ground and what that common ground had changed to, because all those years had passed. We were getting re-familiarised with one another.

This is just so great, and it’s really fun to play live, also, mainly because I get to play a guitar, and that’s always fun. We usually track everything individually, but when we were recording this one, especially on the choruses, it was all of us just sitting in a circle with this crazy microphone in the middle and we were all playing together. Which was a lot of fun.

I love this song. It’s a little dancey – which I love – but it also has a ripping solo in it, which I think is funny and great, and I think this song also speaks to why this band works, because this is Mark’s least favourite Taking Back Sunday songs and one of my favourites. And that, I think, says a lot for the checks and balances and that system within our band. Which used to create friction, but now it just keeps everybody in check – I’m really glad that even though Mark and I like a lot of things that are similar, there are certain things that we just can’t or don’t agree on as far as musical taste goes. And then the same with Shaun [Cooper, bass] and Eddie [Reyes, guitar], or John [Nolan, lead guitar] – we each have common threads but there’s a bunch of curveballs in there that help keep everybody on the same page.

This is the first song off Tidal Wave and it’s one of the faster songs I think we’ve ever written. And it’s also unlike anything we’ve done in terms of the approach. I just think it’s a great song. And the fact that we named a song Death Wolf is something that I’m just really happy about! I forget how the intro happened, but before it was an intro it got put in before one of the choruses and it was almost like you were running as fast as you can someone just ripped the carpet out from under you and all of a sudden you’re just floating, or like you took flight. And the fact we were part of creating something that makes me feel like that makes me really proud.

I’m going to have to go with this song, which is also off the new record. Because it’s just really beautiful but it’s also really simple. The reason Tom Petty is one of my favourite songwriters is because he manages in the most simple way possible to take you out of wherever you are and bring you into his place, or whatever the song’s intention was. And for me, that’s what Homecoming does and I hope it does that for other people, too.

Taking Back Sunday will be touring throughout the remainder of 2016 and 2017.