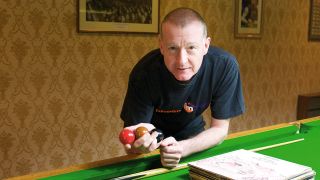 "I have a reputation for being boring, so people automatically assume I must be into prog because it’s also boring. And that my record collection therefore is full of albums featuring 30-minute drum solos. But that really shows how much bigotry there is still around when it comes to prog. I’m not into straight prog rock – I never liked Yes, ELP or Genesis, the more ‘acceptable’ faces of the genre – nor am I into straight jazz. But mix the two, and prog-jazz works for me! The recipe is magical.

“I got into prog when I was in the sixth form at school. Most of my mates were into Led Zeppelin, Deep Purple, Cockney Rebel or Roxy Music. But a friend introduced me to the Canterbury scene, and it immediately fascinated me. I loved what bands like Soft Machine and Henry Cow were doing – it was challenging and very complex.

“The first prog album that I ever bought was Gentle Giant’s In A Glass House. That made a real impact on me. I think that band have remained underrated, although now it seems that there are a lot of young people discovering them, which is amazing.

“One thing that really got me interested in prog was listening to Alan Freeman’s Saturday Rock Show on Radio 1 [which ran from 1973-1978]. Everyone rightly gives credit to John Peel for playing esoteric music. But I heard so much great stuff on Freeman’s Saturday afternoon show, while working as a meat packer in a local supermarket.

“I’m known for my love of Magma, who I got into when I caught them live in 1974 at the Roundhouse in London. I’d gone to see the support band, Isotope, but stayed on and was blown away by Magma. I just had to have everything they’d recorded. There is a stigma about French bands in this country. We are only separated by a little drop of water, but ask British prog fans in general about French music, and they generally have no idea. I would strongly recommend, for instance, that readers of this magazine should check out Albert Marcoeur, who is obviously inspired by Frank Zappa and Robert Wyatt. Now he sings in French, so you have no idea what he’s on about. However, I have been told his lyrics are clever.

“Talking of Robert Wyatt, one album in my collection that I would strong urge everyone to get is Rock Bottom. It’s the type of album that you have to hear when you’re smashed out of your face. It is just an incredible record.

“As I said earlier, I am usually not into the more mainstream prog, but one album that I totally love, and again would insist has to be in everyone’s record collection is In The Land Of Grey And Pink from Caravan – another band from the Canterbury scene. On the surface it might seem to be a little genteel, but the lyrics are so sharp, and there’s a biting sense of humour in there as well.

“I have about 2,000 albums in my collection which are of a prog nature, and I’m always on the hunt for records. The thing is that there is so much music out there that you’ll never get close to hearing it all.

“I tend to buy most of my CDs and vinyl online these days. But I do miss the local record shops, which were run by people with a vast knowledge of the artists. I’d go into these places as much for the information as for the records. I still buy vinyl, but only if it’s original. Too many re-issued vinyl records are mastered from shitty CDs, and have the same compression problems that we know so well from the latter. You hear an album on vinyl and get the full dynamic range – as was meant to be the case.

The advantage of CD reissues is that so much stuff left behind in the vaults, because of space problems on vinyl, is now available. Two of the exciting things I’ve got recently are the 40th anniversary Henry Cow box set – which has nine CDs and one DVD disc, all unreleased – and Magma’s Studio Zund set, which is also just an incredible journey for genuine fans.

“I’d also like to mention Camberwell Now, an astonishing band from the 1980s, who were based in London. They only released one album, The Ghost Trade, but it’s worth having in your collection.

“I’m very lucky to be able to do a radio show every Monday from 10pm to midnight on Phoenix FM – which is called The Interesting Alternative Show. This goes out to the Brentwood and Billericay areas in Essex. It’s also online. What I do is play all manner of strange music, and through the chat room I have discovered so many new and exciting bands, who are really revitalising prog rock for me. From Oxford, there’s a clever band called Antique Seeking Nuns. In Japan there’s a whole genre opening up, with bands who are inspired by what they’ve heard from the likes of Magma, and have made it their own. Bands like Machine & The Synergetic Nuts – they’ve added in their own twist.

“Do I have any rare albums? I do, yes. But I’m not sure how rare they might be. I actually inherited a load of albums from the guy who ran the French fanzine Ork Alarm, which covered so much left-field music. When he died, his father gave me all of his albums - and there are some special  records in there.

“These days, the best way to keep up with what’s happening is on MySpace. There are literally hundreds of talented bands to hear – bands who’ll probably never release anything. You can spend the rest of your life hunting them down.

“But ultimately what pleases me now is that the term ‘prog rock’ is no longer considered dirty. So now I feel that my record collection is becoming almost acceptable again!”