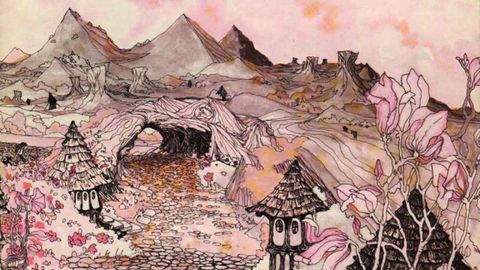 When it comes to the classics of 1970s Canterbury scene prog, Caravan’s In The Land Of Grey And Pink is seated at the top table, a centre of attention, charming the plebs and proffering the port.

A career-high collection of delightful whimsy, (Golf Girl), Middle-earth-like fantasy (the title track, with ‘nasty grumbly grimblies’ ‘climbing down your chimney’), the beautifully melodic (Winter Wine, Caravan’s greatest short-course moment), and a sprawling, enveloping epic (Nine Feet Underground), it’s one of prog’s cornerstone albums, of the kind that gave the genre a good name. And how many other albums dare to open with a laughing trombone? Now that’s class.

Like adding a tattoo to the arse of the woman in Rodin’s The Kiss, some remasters have, criminally, messed with the original rather than just given it a Mr Sheen wipe-over. Not so here. As with all the other albums in the Prog Rocks! series of heavyweight-vinyl reissues, it’s an analogue-source master rather than a remaster involving any black-arts audio jiggery-pokery. Which means, reassuringly, the wah-wah pedal on/off clunk still clunks, and the bass bum note (so off the rails you can’t even get away with calling it jazz) 5’ 20” into Nine Feet Underground remains just as jarring. A shame, though, that the label isn’t the same colours as the original./o:p