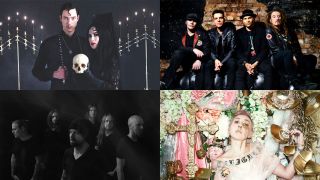 This year has undoubtably been an incredible year for metal. Heavyweights like Rammstein, Slipknot and Tool made triumphant returns, while it was also the year of the underdog, with less mainstream artists making waves in the metal underground.

The vibe was encapsulated by their debut album, helpfully titled Twin Temple Bring Your Their Signature Sound… Satanic Doo-Wop!. “We’re avid collectors of old, forgotten rock and occult records, so this is the record we were always hunting for – that really rare, deep soul doo-wop cut that makes you think, ‘What the hell, they worship the Devil, that’s amazing!” says Alexandra.

Italian metallers Lacuna Coil's dramatic ninth album, Black Anima, was named for their native tongue's word for ‘soul’ and the darkest colour they could think of. It was made following a difficult time for singer Cristina Scabbia, as she lost both parents and came out of a longterm relationship with Slipknot’s Jim Root.

“This is a healing record,” she says. “Through Black Anima, I learned to walk in the darkness and manage the darkness that appears in my life. I feel bulletproof.” It also featured new axeman Diego Cavallotti and drummer Richard Meiz, marking a new era for the band.

No-one expected a comeback album from the British rockers, which made Renaissance Men all the sweeter. Featuring the classic, mid-90s line-up of Ginger, guitarist and co-founder CJ, drummer Ritch Battersby and bassist Danny McCormack, it was their first record in 10 years and stands shoulder-to-shoulder with their landmark 90s classics, Earths Vs The Wildhearts and P.H.U.Q..

Danny had last played with the band in 2005, spending the interim period battling a heroin addiction that culminated in him having his leg amputated following a brain aneurysm in 2015. “The four of us, making this noise, that’s what this record is all about,” says Ginger.

The Greek metallers Rotting Christ delivered their most grandiose album in 30 years, based on the words of history’s most enlightened thinkers. The Heretics celebrated figures such as Thomas Paine, Friedrich Nietzsche and Voltaire, whose views stood in defiance of contemporary norms.

When A Shadow Is Forced Into The Light is the darkest record Swallow The Sun have ever made. The Finnish doom-death metallers delivered eight atmospheric tracks that expressed the grief felt by guitarist/songwriter Juha Raivio, following the loss of girlfriend Aleah Stanbridge.

Singer Mikko Kotamäki gave voice to his bandmate’s emotions, turning away from growling vocals to deliver emotional cleans. The result is breathtaking. “There’s no way to prepare yourself for this material, but it probably helps that we are really introverted Finnish guys and we’re not very outgoing personalities,” he says. “Life is always hard for Finnish people.”

A year ago, barely anyone had heard of Kristin Hayter and her solo project, Lingua Ignota. That changed with second album Caligula. Using elements of church and classical music, noise, industrial and extreme metal to deal with her experiences of domestic violence, it was an intense shock to the system.

“I think that the moniker Lingua Ignota [‘Unknown Language’] has proven to be a fairly accurate description of how people digest my music,” she says. “Very often people do not have words or seem frustrated with themselves that they can’t describe what the music does to them.”

After a 13-year wait, Tool finally delivered on their promise of a new album. Clocking in at around 80 minutes, Fear Inoculum was full of familiar polyrhythms, poetic lyrics and high-level musicianship, but each element took time to unravel.

“It’s just more of a proggy-vibed album, I suppose,” says Danny Carey. “That’s what happens when you work on things that long, you know? If we’d have knocked a record out in a year, it probably would have been more like four- or five-minute songs, but we’ve done that before, so it’s kind of nice to grow and change a little bit.” We approved.

Read more from these interviews and discover a whopping 43 other bands who made our Top 50 albums of 2019 list in the latest issue of Metal Hammer magazine, out now. Find your nearest copy here.