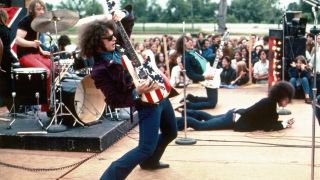 For decades, films like The Kids Are Alright, Gimme Shelter and Don't Look Back dominated the rockumentary landscape, but since Metallica opened up for Some Kind Of Monster's warts'n'all exposé, Searching For Sugar Man has won an Oscar, and bands as unglamorous as Rush and Anvil have been the subject of award-winning films.

Digital technology has reduced the cost of making films and enables stories to be told more easily than ever before — hence the appearance in 2012 of a film about the death metal scene in Angola. We’re truly living in the age of the documentary.

So here, in no particular order other than that in which they came to us, are 16 lesser-known music documentaries. Some are classics, some have cult appeal, some you might not have heard of, and some you might struggle to find via entirely legitimate means. All are worth watching.

Made in 2002, the film has played at festivals the world over but never been given a commercial release. Years of legal wrangling and a failed Kickstarter campaign have seen to that, with the filmmakers blaming guitarist Wayne Kramer for the “tremendous financial and personal devastation” they’ve experienced. It’s a shame, as the movie is brilliant, capturing the band at their confrontational, authority-baiting best.

Initially a film you could only see at private screenings — it didn’t officially play in public for years — The Wrecking Crew wraps up the story of the Los Angeles session musicians who performed on so many classic 1960s hits. The movie is directed by Danny Todesco, whose father Tommy played on songs by the likes of Elvis, Simon & Garfunkel, the Beach Boys and Frank Sinatra. The film finally saw the light of day after a successful Kickstarter campaign raised $300,000 to pay music licensing fees.

The Decline of Western Civilization Part II: The Metal Years

In early 2001, the DeclineMovies website was launched, asking fans to register to be notified when the three Decline Of Western Civilisation movies — “Coming Soon to DVD and Video!” — would be released. Fifteen years later, they finally saw the light of day. All three are worth watching, but Part II is magnificent, not least for the poodle perms and hopeless enthusiasm of so many of the participants (the film captures the Sunset Strip metal scene of the mid-1980s with giddy delight). Then, of course, there’s that scene with W.A.S.P.’s Chris Holmes in the swimming pool. He’s a happy camper.

Driver 23 and The Atlas Moth

A pair of brilliant documentaries covering seven years in the life of struggling Minneapolis prog guitarist Dan Cleveland. With a self-belief that dwarfs his very meagre talent, Cleveland is a delivery driver by day and a member of Dark Horse by night. A severe obsessive compulsive disorder doesn’t help matters, but Cleveland’s ingenuity — he builds his own studio — and determination make him a likeable, sympathetic subject. Director Rolf Belgum claims the first film (the better of the two) was made for less than $10, while a third (working title, Driver 23 Years Later: Somewhere Near Cleveland) will begin shooting soon.

Not Dead Yet: the Jason Becker story

Aged just 20, guitar prodigy Jason Becker joined David Lee Roth’s band. A week later, he was diagnosed with motor neurone disease, a degenerative condition where the sufferer’s muscles completely waste away. Given five years to live, Jason’s still with us a quarter of a century later, communicating via a computer system built by his father, and still composing. It’s a genuinely inspiring tale.

Until The Light Takes Us

A rather forlorn portrait of black metal made by a pair of Americans who relocated to Oslo to shoot the film. Journalistic rigour is noticeable by its absence — Burzum’s ever-delightful “Varg” Vikernes is given a platform to say whatever he wants without any of it being questioned — but it’s still fascinating. If this leaves you wanting more stories of church burning and ritualistic murder, the much earlier Norwegian documentary Satan Rides The Media is a more balanced affair.

Charming and heart-warming, Sound It Out is the story of the record shop of the same name, the last-surviving such business on Teeside, and its eccentric customers. The film’s production and distribution were both funded by crowdfunding website IndieGogo, and if anyone still doubts that such campaigns are a legitimate way to raise finds, it’s worth noting that Kickstarter films have now been nominated for seven Oscars.

I Need That Record!

Focussing on the demise of independent record stores in the US, I Need That Record! is less delightful than Sound It Out, but still worth watching. The film’s one major flaw is that it fails to challenge any of the musician interviewees perpetuating the ludicrous myth that people who work at big record companies don’t actually care about music, but the interviews with former shop owners are more interesting, and much more poignant.

In Bed With Chris Needham

Ahh, Chis Needham: the man who brought reality TV and heavy metal together years before The Osbournes. This 1992 BBC diary captures all the comic confusion of teenage, as Needham tries to get his band off the ground, struggles with girlfriends, and comes up with a solution for global warming. In 2008, Needham admitted he’d not seen the footage in a while: “I’ve not watched the full video diary in one piece – start to finish - since the night of my 20th birthday. I had a bottle of Jack, a couple of spliffs, and I basically said goodbye to my teenage self.” Needham’s band, Manslaughter, eventually got to play at the Marquee at the request of Lawnmower Deth.

The only time GG Allin saw this movie — which captures the unruly rocker at his shit-throwing, audience-assaulting, self-mutilating ‘best’ — was at a preview show a few days before he died of a heroin overdose, when he threw bottles at the screen, injured a female viewer, and fled the building to escape the police. A genuinely terrifying loose canon, his legacy lives on in the shape of brother Merle, who sells paintings by serial killers like John Wayne Gacy and Henry Lee Lucas via GG’s Facebook page.

A Vice Magazine profile turned rockumentary, the film tracks down Acrassicauda, an Iraqi metal band formed under the reign of Saddam Hussein and forced to flee the country after violence in Baghdad escalated (they’re one of the few rock bands in history whose rehearsal space was destroyed by a missile). Eventually given asylum in the US, the band successfully raised $37,383 on Kickstarter only last month to pay for the recording of their first full-length album, a concept piece based on the Epic of Gilgamesh, an ancient Mesopotamian poem written in the Acadian language.

To be completely frank, Death (the Detroit protopunk outfit, not the Orlando metallers) aren’t a great band — and only the incendiary first single Politicians in My Eyes is a great tune — but theirs is truly a great story, even if it’s a tale that suits a narrative driven by hindsight. An trio of brothers inspired by The Who, Death were writing short, spiky songs well before punk came along, but failed to get signed and disappeared, before being rescued from obscurity 30 years later.

If there’s any more extraordinary story in music than that of Arnel Pineda, we’ve yet to hear it. From living homeless on the streets of Manila to joining AOR legends Journey after being spotted singing covers on YouTube, Pineda’s first gig with his new band was broadcast to a TV audience of 25 million. As deep ends go, that’s pretty scary. The film’s no masterpiece, but Pineda’s a very likeable chap, and his return to the Philippines with the band is a goosebump-inducing climax.

“You mess up once, I’ll punch your face in”, says music teacher Paul Green, during this lively documentary. The fact that he’s issuing the threat to a girl drummer barely into her teens should give you a flavour of how seriously he takes his job, but he aims high: his first batch of teenage students had to learn Pink Floyd’s The Wall in its entirety, and two graduates have gone on to play with Adrian Belew (best known for his time with King Crimson). Possibly the only educational facility which features an award for “Student Most Likely to Kill Himself”.

From the director of Rock School (above) the beginning of this film finds Pentagram’s Bobby Liebling living in his parents’ basement, arms covered in weeping sores, shooting heroin and smoking crack. But it’s not all grim: Last Days Here is also a tale of rescue and redemption, as fan/manager Sean Pelletier draws up a contract to save his hero, using the singer’s prized record collection as collateral. Some Kind Of Monster this certainly isn’t.

This legendary film is only 17 minutes long, but it’s 17 minutes of unrivalled hilarity, shot outside a Judas Priest show in 1986 and starring a cast of inebriated, unwittingly comical fans. Worth buying for the DVD extras, which include a “whatever happened to?” segment tracking down the original participants, plus three further films shot using the same template: Neil Diamond Parking Lot, Monster Truck Parking Lot (not as good as it sounds), and Harry Potter Parking Lot. A sequel of sorts, Heavy Metal Picnic, was shot at a chaotic farm party in Maryland, while Director Jeff Krulik’s most recent project is Led Zeppelin Played Here, a film about the band’s first American gig, a possibly mythical community centre show attended by just 50 people.