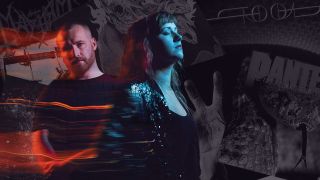 Beginning as a duo of best mates bonded by a shared love of Queens of the Stone Age, Helmet and Tool, The Hyena Kill caused ructions in the underground noise scene, exploding into a four piece monster that's ready to unleash its latest single upon an unsuspecting world.

The Mancunian quartet are constantly and consistently building upon their foundation of frenzied 90s alt-rock, hardcore and psychedelia, most recently boosting the atmospherics for their latest single, Cauterised, resulting in a sound that is clearly very Tool influenced while equally evoking the eerie stylistic elements of Deftones.

Check out the video for Cauterised, ahead of its release tomorrow, below:

With such a breadth of influences and technical prowess, Hammer was keen to find out what metal riffs the band hold in particularly high esteem, so we asked them to pick out their personal favourites – and unsurprisingly the answers include every metal genre, from black metal and doom to groove and hardcore.

Charlie Seisay (bass): "I have to be honest, this is a filthy degenerate riff from a band that can be similarly described. If Satanism ever overtakes Christianity Mayhem's Deathcrush will replace Avé Maria."

Charlie Seisay (bass): "Moving from corpse paint to camo shorts, Pantera's The Great Southern Trendkill is a virile monster. It’s the elephant’s foot of toxic masculinity; the kind of American racket used to cheer up the guests at Guantanamo."

Charlie Seisay (bass): "Quite simply out-bloody-rageous. The final clinching proof of the existence of universal and transcendental evil."

System of a Down - Suite Pee

Steven Dobb (vocals, guitar): "The whole tune is an absolute rager. When I first heard System of a Down's Suite Pee as a teenager it had me absolutely dumb founded and bouncing all over the f***ing place.

"But... that breakdown riff! It's so simple yet brutally heavy. I love it. It will always and forever make me do a full-on stink face. Everytime I wanna write a dirty riff that tune always comes to mind."

Steven Dobb (vocals, guitar): "Adam Jones has always been one of my guitar heroes and a massive influence on the way I approach playing and song writing. When I heard that initial big riff on 7empest I was instantly like blown away.

"It just screams Adam Jones as it smashes into your ears. Although the song is essentially one massive riff fest, the moment when everything cuts out after the intro and the riff comes in is my favourite bit on the album. I will never tire of that song or that band."

"They’ll always hold a place in my heart as one of my favourite live acts, and I feel incredibly fortunate that I’ve had the privilege of seeing them play well over a dozen times up and down the country.

"It’s difficult to choose one special moment from the band amongst a discography full of absolute juggernauts; but the winding, chaotic, downright satisfying stormer of a riff that signals the end breakdown of Sacred Shapes has to take the prize."

Steven Dobb (vocals, guitar): "THIS IS HOW YOU OPEN A RECORD. This is a song that makes me want to dive headfirst into the nearest body of people I’m standing around. I do not listen to it on the bus.

"Every single member of Converge is on point with Dark Horse, but Guitarist/Producer extraordinaire Kurt Ballou is the real star of the show, here.

"The hot-as-hell production is so perfectly suited to his blistering lead line that punches through the rest of the frantic hits, thrums and wails.

"Converge successfully managed to write a song where every riff continues to get heavier and more intense as time progresses, and they manage to accomplish it in less than three minutes. Stunning."

Steven Dobb (vocals, guitar): "The chorus riff in Like a Wave manages to be one of those rare pieces of guitar riffery that somehow manages to teeter on the brink of being both downright disgusting and incredibly catchy.

"It’s one of those songs you hear for the first time and immediately curse yourself for not having the guts and/or creativity to make something like it.

"No, really - I can’t look at myself in the mirror and honestly tell myself that I will ever write a guitar part as cool as this one. I try not to think about it too much."

Lorna Blundell (drums): "Slipknot's People=Shit came out when I was in high school and people didn't know what to do with themselves when they heard it. The song title itself probably earned Iowa its gold star parental advisory sticker.

"It’s a head banger all the way through. I still enjoy a good People = Shit graffiti on the back of a toilet door."

Helmet - In The Meantime

Lorna Blundell (drums): "Saw them play this live a few years ago and it shook me. I still remember the force of the riff kicking in. Thick, crunchy yet slightly sludgy. My favourite mix. It’s one of those songs I can't seem to have on loud enough."