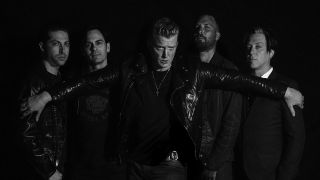 In a very swanky central London hotel, we wait patiently for Queens Of The Stone Age. Surrounded by marble and leather, we’re offered a drink by the staff but politely decline out of fear that we’ll have to take out a loan to pay for it. All around us travelling businessmen and city breakers bustle about, chatting and scrolling mindlessly through their phones, blissfully unaware that one of the biggest rock bands on the planet are sat just meters away.

When our time comes, we’re led upstairs into a large room, empty save for a small wooden table in the corner. Sat down, in front of a half-drunk bottle of water, are Dean Fertita and Jon Theodore, keyboardist/guitarist and drummer for Queens Of The Stone Age respectively.

We’re meeting on the eve of the release of their seventh studio album Villains. Their first in four years and the first record that Jon has contributed to fully. Produced by Mark Ronson (aka the guy from Uptown Funk), Villains is full of funk and swing, designed to make the listener dance, far removed from the darkness of 2013’s …Like Clockwork, but like their recent Focus Group video shows, each QOTSA album is an evolution and different from the last.

But how did Villains come to be? Why did they make what has been described by the press as a dance record? And what is rock ‘n’ roll anyway? We join a high-spirited and caffeine-pumped Jon and Dean to find out.

The world has changed a lot since the last album, have recent world events made you re-evaluate what you do for a living and why you make art?

Jon: “It hasn’t made me re-evaluate as much as it’s reaffirmed the faith that I have in the power of music to unite and unify people for good. It’s made clear who the enemies are and that it’s as crucial now, if not moreso, to stick to our guns and fight for the powers of good.”

Dean: “Making music together has kind of been a safe space. We kind of shut the doors to that and just appreciate what we can do together to feel better about things.”

Dean: “The last tour ended three years ago and it’s nuts how much time goes by. But going into this record, I knew the consistency was still going to be there. We didn’t have any guest players on the record, and as much as I enjoy playing with other people, it was nice to just have the room to ourselves. My experience making the Iggy record [Post Pop Depression] dovetailed a lot into this. There’s no way that making that record and having the experiences we did wasn’t going to affect what we do now. I think the same thing for Josh [Homme], too. We got out of there and immediately started talking about doing Queens, so it re-energised everybody.”

From the outside looking in, QOTSA feels like Josh’s baby and it’s his thing. Is that a fair reflection of band life?

Dean: “I still view it in that way because he’s the main songwriter, but everybody feels very comfortable in the space that they occupy, the way that they can contribute, and progress the songs along. Early on there might’ve been apprehension from me to throw stuff on the table and get involved, but there’s no hesitancy any more, which is where you want to be. If you’re creating something you want everybody putting every idea they have into it, and to not be afraid to say anything or do anything to disrupt the original concept.”

When it was announced that you were working with Mark Ronson, it split people into two camps. One who thought it was awesome, and one who couldn’t understand because he’s the Amy Winehouse/Uptown Funk guy. How was it for you working with him?

Dean: “He’s a music guy. Mark knows Queens, he’s a fan, and it was really easy. I looked forward to having him along every step of the way because one of the things he’s good at, and it’s what good producers do, is recognise who they’re working with and try to get the truest version of them. The cool thing from an outsider point of view is knowing that it would start a discussion. We just knew it would be an interesting risk to take on both sides.”

Jon: “The other thing to address is that those pre-conceptions didn’t come into the room with us. When we started we all cared equally about this being great. It wasn’t Mark Ronson from Amy Winehouse or Uptown Funk, it was Mark the producer. It didn’t have any real bearing on it so we all came together and it was natural.”

Do you consider yourselves perfectionists?

Jon: “We overdubbed the cymbals on this record, y’know? What would normally be me crashing on a ride cymbal through a chorus, we’d spend an hour sorting through different cymbals to find the exact right one, then choosing a microphone, then processing it. The individual cymbals are calculated and placed, it’s really detailed. But we still laid it down with no clicks and all of us in the room together. It has that human rawness because it’s us playing, but we could calculate the tone and mix, so that creates the illusion of this perfect thing. But when you listen closely it’s all over the place.”

There’s a strong funk and swing element throughout the album, was that something you were personally keen to incorporate?

Dean: “The only conscious discussion we ever had was ‘Let’s try to create an atmosphere that’s not as dark as the last one we were in, and see what happens.’ There’s still a dance element on every fuckin’ record, so we said let’s take that knife and stick it in further, then see what happens. Jon was abused in there with Mark and Josh saying ‘Let’s see if he can do this one’ and just come up with the most ridiculous shit for him to try, and he’d do it! It was really fun, and to put that element first felt like a natural response to the previous record for me.”

Since The Way You Used To Do was released, there’s been a lot of talk about Villains being a ‘dance’ record. Was this your intention?

Do you think rock music has become a bit too po-faced and serious to encourage people to dance? A lot of bands seem to have their eyes glued on the big chorus rather than trying to make the crowd move.

Jon: “There’s always been a very serious element to rock ‘n’ roll, it’s live or die, it’s all or nothing. The biggest challenge is the technology and the possibility of so-called perfection – it may line up perfectly on a computer but that doesn’t mean it’s going into your body, it’s usually the opposite. The biggest threat is the fact that electronic dance music has become the new pop, so the level of rhythmic perfection is so squeaky clean that the rock ‘n’ rollers are being sucked into that vortex. When the chorus is coming and everyone leans forward and it picks up a little bit, your heart rate goes up and you get fuckin’ amped. If you’re gridded out on a computer you don’t get that emotional ebb and flow, it’s this baseline safe thing that can never take flight and catch fire. That’s a more dangerous turn in events than seriousness. If you’re making art and you’re presenting it, you better fucking be serious. It’s fun and you can make jokes about it, but you’ve gotta want to die for it.”

QOTSA are one of the only big bands who still have that swagger and attitude and rock ‘n’ roll element to them. Where do you seen Queens in the world of rock music?

Dean: “We’re an island. We shut the door on everything else and just worry about us. I’ve never thought about what it means in a bigger way, we just try to keep that obligation to each other and keep ourselves excited.”

Jon: “And to keep our hands on the rudder of a ship that doesn’t need a computer, and cares more about the interaction and energy between us and the crowd. The moment is more important to us than perfection. It puts us in a small club of people who are willing to step out with no backing tracks and just go for it in the moment, creating as many memorable experiences as we can. I think that’s becoming rarer these days.”

As well as the music being real, musicians need to be real people too. There’s been a lot of talk since Lemmy died the idea of the rockstar is fading away. Is that something you agree with?

Jon: “I think that’s the nature of humanity on all levels. With the rise of telephone technology, it’s like we’re removing the underground and the dedicated hours you need to spend seeking out information or inspiration. The attention span of the universe has shortened to such a degree that it doesn’t seem like there’s enough time to gestate Lemmys or Bowies any more because everyone can make a quick song on their laptop on the train and have it be done by the time they reach their stop. And they could have thought of five fashion choices! But I don’t think it’s specific to music, it’s just the nature of humanity. I’m not saying we’re doomed, but we’re pretty much fucked.”

Queens Of The Stone Age’s new album Villains is out now and available via Amazon.

The top 10 best Queens Of The Stone Age songs

The A-Z of Josh Homme