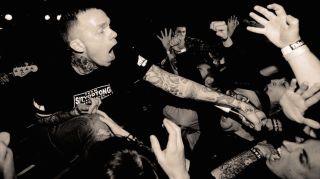 It’s been a quarter of a century now since Boston, Massachusetts band Converge began to take hardcore and twist it into all manner of ghastly and unrecognisable shapes. They have become one of the most loved cult bands on the planet in the process. Here, we ranked their recorded output from worst to best.

It seems a shame when considering such a forward-thinking band as Converge that we have to put their latest album rock bottom of this list. But, unfortunately, AWLWLB is the weakest moment in their catalogue. There are still flashes here where they conjure the spite and ingenuity that has become their calling card over the years – Trespasses and Coral Blue are both stand outs – but ultimately this brought very little to one of the best bodies of work in music.

Metalcore was barely even a thing back when Converge released their first album, and the raw, early ideas present in HIAH certainly hint at a band with promise. But quite how much promise you never could have foreseen from these songs. In fact, it went so far under the radar that it’s doubtful that the majority of people familiar with these songs even own this album. Instead they reappeared on the Unloved And Weeded Out and Caring And Killing compilations. A tough one to get hold of, but an interesting artefact of a band in their infancy no less.

Three years after the release of When Forever Comes Crashing Converge would rip up the rule book completely, but here they were still just toying with it. Of the two more readily available pre-Jane Doe albums, this one sits slightly below its predecessor, but it’s still a dizzy, whirlwind of a record. With a production job from Today Is The Day’s Steve Austin and featuring High On Fire man Matt Pike on backing vocals, songs like Conduit begin to really capture the band that Converge were about to become.

With such a sterling back catalogue it’s fair to say that Petitioning The Empty Sky is an unfairly overlooked album in Converge’s arsenal. Taking their early, proto-metalcore ideas and pushing them into totally new territories, the band, along with peers in Coalesce and Cave In, had really begun the process of warping hardcore into something totally new. And you won’t find many albums that can top the opening three-track whammy of The Saddest Day, Forsaken and Albatross. If you’ve not heard it, rectify that now.

When it comes to judging the band’s records in the 00s you might as well draw straws at random, because all four albums are full 10s. No Heroes comes bottom of that particular pile through no fault of its own – this is a superb record. The opening of the album, with none of the first five tracks clocking past the two-minute mark, might make you think that this would be a return to the band’s more straightforward punk rock roots. But then the staggering Grim Heart/Black Rose arrives in all of its near 10-minute glory, and you realise that second-guessing a band as unique as Converge is pure folly.

Another near perfect album. And one that, if it were made by 99 per cent of other bands, would be lauded as easily their best work. But Converge are no ordinary band, and You Fail Me initially suffered with following in the direct aftermath of the mighty Jane Doe. Time has been kind to the record though, and now you can appreciate what a genius piece of work this is in its own right. The guitar tone of Kurt Ballou on the grinding title-track is jaw-dropping, and when it reaches its climax you’d be hard pressed to argue that it isn’t the best song the band have ever recorded. But, when surrounded by Black Cloud, Last Light and Eagles Become Vultures we’re torn to suggest that it’s even the best song on the album!

The band’s most collaborative work, featuring various members of Cave In, Genghis Tron, Entombed, The Red Chord and Neurosis, it became an unlikely critical hit in more mainstream territories than the band had ever been exposed to before. Quite what those people would have made of the twisting math punk of opener Dark Horse Lord only knows. It’s fair to say that Axe To Fall sees Converge at their most measured and open, the frantic nature of their music becomes focussed into smaller pockets and the collaborative process allows their ideas to really breathe. And it’s not too much of a stretch to suggest that this may have been the lighting of the touch paper that inspired their exceptional Blood Moon shows earlier this year. Nearly 20 years into their career, Converge were still breaking new ground.

Not just the best album of their career, Jane Doe is without question one of the most important records in the history of underground music. The metallic hardcore that the band had been playing in the 90s had suddenly morphed into a beast of untamed savagery and wildly unique ideas. With a slew of excellent bands coming up from the underground, Converge became the inspiration for many, many people to reject the nu metal and pop-punk of the mainstream and instead search for music made with real heart and an engaged mind. Vocalist Jacob Bannon had never sounded as feral as he does on the opening one-two of Concubine and Fault And Fracture, Ballou torments his guitar to the point where it seems to be crying for help on Homewreaker and the rhythm section of drummer Ben Koller and bassist Nate Newton treat the listener like their own personal punchbag. Fifteen years on Jane Doe still sounds heavier, more inventive, more destructive and more alive than almost any album by any band from their genre. The band that helped invent metalcore had raised the bar so high that they killed the competition stone dead.