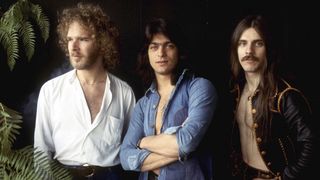 While it’s easy to dismiss Canadian rock bands as no more than extension of what goes on over the border in the States, the country has come up with some of the greatest artists of the past five decades. The likes of Neil Young and Bryan Adams are global legends, but there’s also been an avalanche of influential and successful bands from that country.

The list is vast, but here are the 10 who perhaps best define Maple Leaf Mayhem!

Renowned these days for the mainstream success of the movie Anvil! The Story Of Anvil, the Toronto band were embraced during the NWOBHM era, and went on to become one of the major influences on the burgeoning thrash movement. Albums like Metal On Metal and Forged In Fire were very much a blueprint for what Metallica et al went on to achieve.

The Montreal band made their reputation in the 70s, principally because of Frank Marino’s extraordinary guitar skills. Often compared to Jimi Hendrix, Marino developed his own fluid style, which helped to make albums like Mahogany Rush IV and World Anthem among the best releases of the era. The band’s progressive blues approach remains compulsive.

A trio from Toronto who never really captured the imagination in the UK, Triumph often suffered from unfair comparisons to Rush, but they had their own sound. This combined technique, power and melody. The all-embracing brilliance of albums like Allied Forces and Progressions Of Power gained them enormous success in America, helped by a massive stage set.

The Toronto band who could be said to have created progressive metal as we know it, Rush have never stood still. From their sword & sorcery roots through to a more electronic approach, the band have constantly evolved, successfully taking up the challenge of remaining on the cutting edge of rock. True visionaries.

If the US could be said to have close to a monopoly on AOR, then Calgary’s Loverboy were right up there with the best of them. In their early 80s prime they came up with a string of hit singles that still resonate down the decades. Through albums like Get Lucky and Keep It Up, Loverboy showed they had a real depth to their commercial acumen.

Nova Scotia band April Wine made their own mark on history when appearing on the bill at the first Monsters Of Rock festival in 1980, but that’s not where their impact ends. Here was a band who mixed sophistication and passion in equal measure. Harder…Faster and The Nature Of The Beast are still albums worth several spins.

Born from the remnants of The Guess Who, another fine bunch of Canadians, Bachman-Turner Overdrive were among the masters of anthemic rock. From Winnipeg, they came up with a rollercoaster of timeless fist-in-the-air songs, from You Ain’t Seen Nothing Yet to Takin’ Care Of Business. Randy Bachman and Fred Turner, though, were far from being superficial chart commandos. Albums like Not Fragile and Four Wheel Drive are stuffed with diversity and attitude.

Yes, there was an American element to this lot, but Steppenwolf were formed in Toronto, and have always been regarded as pioneers of Canadian rock. Of course, whenever the band’s name gets mentioned, Born To Be Wild comes right to the fore. But when you enter the lair of albums such as Steppenwolf and The Second you realise this ‘Wolf bit hard and often. They really did have a firm hand in laying the template for hard rock.

Nobody sounds like Quebec quartet Voivod. They have a freeform surrealism that embraces thrash, death, prog and psych, but they’ve always managed to retain a skeletal yet intricate technological style that defies any formula. When you compare what the band did early in their career on, for instance, the Killing Technology album to later releases like The Outer Limits, you can appreciate why they have such iconic status.

One of the Devin Townsend’s first bands, Strapping Young Lad mastered the ability to sound extreme, concussive yet accessible. The band were like a cross between Queen and Ministry. They were utterly brutal, but also possessed a symphonic core. During their decade or so on the scene, SYL came up with albums like Heavy As A Really Heavy Thing and Cities which were manically peerless.