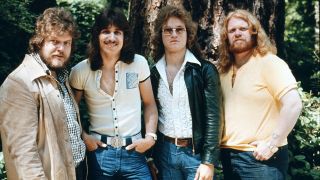 Although for many Bachman-Turner Overdrive are known for a solitary song – a triumph of gruffness, melody and idiosyncratic delivery from 1974 by the name of You Ain’t Seen Nothing Yet – the quintessentially Canadian group compiled an impressive back catalogue over two separate spells.

Now seemingly defunct, they were long lost Maple Leaf cousins to Status Quo; chunky, dependable, affectation-free, and – yes, okay, predictable, but in the nicest possible manner: a bit like the musical equivalent of a Yorkie bar.

Incredibly, when guitarist Randy Bachman and bassist CF Turner reunited as Turner & Bachman in 2009, the sandpaper voices of both seemed unaffected by the ravages of time.

These, then, are their best bits…

A highlight of the band’s self-titled debut album, this sturdy hard rocker set out BTO’s stall in the most unmistakable manner possible. Emphasising those comparisons to Status Quo, its structure is simple yet primal, that instrumental mid-section a pure delight. Just juxtapose denim jackets for lumberjack shirts and away we go.

Though these selections are overwhelmingly and unapologetically culled from BTO’s earliest and biggest selling records, 1977’s Freeways remains a connoisseur’s favourite. The punchy Shotgun Rider is a great tune, ostensibly about a guy who’s offered a job in a saloon bar. It seems innocent enough, though its line of ‘I ride shotgun on his wife’ offers rather more dubious implications.

Does anyone remember I Like Trucking, the Not The Nine O’Clock News skit on lorry drivers? Had that show been Canadian, it might have sounded something like this. Full of rhythmic references to returning home in the ‘cool, cool, cool of the morning’, BTO do indeed leave us in no doubt of their intention to ‘truck all night long’. Well, whatever turns you on.

The title track of the group’s fourth album, Four Wheel Drive is a tough, hard hitting yet deeply commercial slab of boogie-rock. A blistering showcase for the group’s unsung heroes, their rhythm section of bassist CF Turner and drummer Rob Bachman, its pummelling, pedal to the metal strains are at times reminiscent of both Led Zeppelin and ZZ Top.

When all’s said and done, just about any of the nine tracks from Not Fragile could have made it onto this list though that would have made a dreadfully lopsided overview. Named in withering response to the Yes album Fragile, the group’s third album pummelled the listener like a butcher’s mallet. Though competition is stuff, the stuttering, nosebleed riff to its title track is among their very finest.

Yes folks, BTO opted to display the softer side of their oeuvre with a sensitive ditty to a lost lover by the title of, er… Sledgehammer. Its gentle chords are juxtaposed by a heaving great monster of a riff and a set of lyrics that leave us in no doubt of what went on here, and who was at fault: ‘You’re like a sledgehammer/You keep hittin’ on my mind/You’re like a sledgehammer, baby/You been hittin’ from behind’. Ouch.

No cliché is left untapped in Randy Bachman’s love song to the road and for the band’s audience. However, like so many such tunes it also has a slightly darker undercurrent, addressing the loneliness of a touring musician and, many years ahead of its time, mourning the fact that ‘few of us are left alive’. There’s no denying it’s a bloody great tune.

BTO were the masters of keeping it simple and pleasurable. This uncomplicated good time ode to the delights of motorway travel couldn’t be further away from the misery of the M25, and it’s also practical: ‘The time’s real short, you know the distance is long/I’d like to have a jet but it’s not in the song’ – brilliant!

This long-time favourite of spoof deejays Smashie and Nicey came about by accident. Randy Bachman added its now legendary st-st-st-stutter purely as a tease for his brother Garry, who had a speech impediment. Bachman didn’t even intend to complete what he considered a joke track until A&R man Charley Fach insisted it was a hit record. As Randy told Classic Rock in 2008: “That song is a gift from the gods.”

You Ain’t Seen… might be BTO’s most famous song but …Business is their best. With its reference to ‘Taking the 8.15 into the city’, has there ever been a more smile-inducing thumbing of the nose at mundanity of the nine to five existence? And what makes the song more adorable still is the way BTO rub our noses in it, reminding us that as self-employed rock stars they ‘Love to work at nothing all day’ – gah, you bastards!

From rags to riches and back: The turbulent story of Bachman-Turner Overdrive