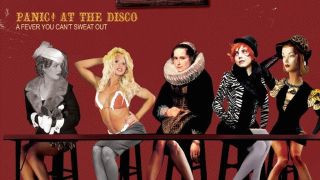 Originality becomes harder and harder as time goes on. That’s a fact of life when the foundations of rock music have been laid down over the course of 50 years plus but in 2005, Panic! At The Disco struck upon a sound that was totally unique and that captured the hearts and minds of young rock fans. I mean, there’s a large chunk of the Motown inspired vocal lines that Patrick Stump of Fall Out Boy has always made his forte but Panic! had moments that threw themselves into electronica, pop punk, doo wop and, most out there of all, show tunes. It shouldn’t have worked. It should have been laughed out of town outright but instead, A Fever You Can’t Sweat Out remains a staple of 21st Century rock that still causes a melee of pogoing and jazz hands whenever anything from it is blasted at your local rock club.

Coming at a time when rock was becoming less of a boys club than ever before (a trend that has thankfully continued to this day), this collection was all about being dance ready. It’s an album built on beats that demand a fist pump (hello Nails For Breakfast, Tacks For Snacks), that encouraged you to shake your ass more than bang your head (Lying Is The Most Fun A Girl Can Have With Her Clothes On) and contains one of the biggest choruses of this millennia (you can deny it all you like, you all know the words to I Write Sins Not Tragedies).

Written while the members of the band were in high school at Las Vegas, it was perhaps their location that played a part in their unique nature. There’s nothing approaching a ‘scene’ to belong to out in the middle of the Nevada desert. If you’ve ever been there (and remember anything about it outside of drinking yourself to oblivion), you’ll know it’s the home of cheesy tribute acts and Celine, Elton and Britney residencies. It’s not ideal for a rock band but it would certainly explain the OTT blasts of tinkering pianos, horns that explode with neon colour and the overriding eccentricity and musical excess captured on the likes of But It’s Better If You Do and There’s A Good Reason These Tables Are Numbered Honey, You Just Haven’t Thought Of It Yet. Yeah, they also like really long song titles.

In Brendon Urie, they also had one of the most charismatic frontmen of his generation. A riot of glamour and inescapable magnetism, his dandy look and demeanour was only outstripped by his musical ability. The band’s star’s credits on the record span lead vocals, rhythm guitar, keyboards, bass guitar, piano, vocoder and synths. He’s also devilishly handsome. What an absolute bastard.

The line-up that wrote and recorded this album fell apart while crafting it’s disappointing follow-up, Pretty. Odd. and there will always be an element of “what could they have gone on to achieve?” that hangs over the band. P!ATD in their current guise are capable of knocking out songs to make panties drop and dancefloors explode to this day but the jewel in their crown remains this modern masterpiece. It’s the type of album that makes you wish you had moves like Napoleon Dynamite.