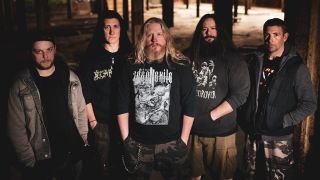 British tech-death maestros Krysthla will be opening up the main stage at Bloodstock this Saturday, ahead of the release of their brand new album Worldwide Negative.

The band's third studio album, Worldwide Negative will be released on August 16 and is the follow up to 2017's critically acclaimed Peace In Our Time.

Producer and guitarist Neil Hudson says, "We always push ourselves to the limit when producing new music, but this upcoming release exceeded what we thought we had in the tank. It’s been an exhaustive but exhilarating process!

"Worldwide Negative is an album with more of an introspective view towards ourselves as the human race, how we impact the world and each other.

"In the pursuit of happiness, safety and security we're slowly destroying our sense of empathy and giving in to a darker way of life that ultimately can only end in misery.”

With such a prestigious slot lined up at Catton Park, we caught up with the band to find out what bands can't be missed at this year's BOA.

"What can we say other than Ginger and co been writing absolute bangers for nearly 30 years. The new album is also one of the best straight up rock albums you’ll hear this year.

"Really looking forward to seeing them hit up the Ronnie James Dio stage on the Saturday afternoon. If you look closely, you’re sure to find Carl and Adi down the front!"

"We couldn’t possibly write this piece without a mention of our old Northants buds who will be tearing the Sophie tent apart on the Friday night.

"We’ve shared stages a fair few times over the years and they always bring the heavy. If their set at HRH metal back in February is anything to go by, there’s going to be mayhem."

"Having recorded their latest record with Neil at his Initiate Audio and Media studio, and being based just up the road in Leicester, we know these guys well.

"They’ve been doing their Grunge/rock/metal crossover thing for a good few years now, and and have never been afraid to continually add and experiment with their sound.

"Bloodstock will see them push that even further with what (we think!) must be a BOA Sophie stage first-the inclusion of a complete string section! Hugely ambitious, and one definitely to watch on Sunday mid-afternoon."

"Noel’s choice this one, born from a love of late 80’s Sepultura, and following Max’s career from there. Noel says “I was lucky enough to be main support for Soulfly in my previous band and they put on one hell of a show. You won’t want to miss them.”

"Looking forward to watching these destroy the Sophie stage. They trade is proper old school death metal, the perfect blend of Death, Pestilence and Obituary – what’s not to like??"

Thy Art Is Murder

"One of Liam’s choices but we are all very excited to check these guys out on a big festival stage. There’s going to be some seriously gnarly pit action when they hit the main stage on Saturday afternoon."

"What can we say – proper tight and a great addition to this year’s line-up. The Belgian bruisers will be hitting up the main stage on Sunday morning, so go check ‘em out! What better way to blow away a 3 day stacked hangover??!"

"We’ve played with these guys around the country a few times now, and they are getting better and better and making a real name for themselves.

"The Sophie stage is made for their high intensity, high energy blend of death/tech and groove and we can’t wait to see it transposed onto the big stage. There will be pits!!!"

"As obviously everyone will have got up early to watch Krysthla on the Ronnie James Dio Main stage on the Saturday morning, you’ll be perfectly placed to catch Cancer Bats immediately following our slot.

"The Canadian four piece are sure to smash it. They bring a massive high energy live show and we will be hoping to warm the crowd up for what promises to be one of the performances of the weekend."

"One of the proper original thrashers, you’ve just got to check them out. They’ve been consistently on it since 1984, and they are well seasoned Bloodstock favourites.

"As luck would have it, they played Bloodstock the same day as we did back in 2016, and we find ourselves on the same day again this year!

"With a lot of the godfathers of rock and metal hanging up their instruments, take the opportunity to catch them while you still can!"