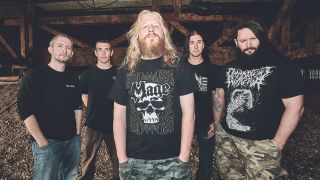 Emerging from the ashes of Brit underachievers Gutworm, Krysthla are bringing bite and belligerence to the UK metal scene.

Purveyors of balls-out groove metal that eschews cliché in favour of subtle invention, the band have just released their debut album, A War Of Souls And Desires, that could hardly be more timely in both musical and thematic terms.

“The title alludes to the constant battle between good and evil, and how your life is thrown into a struggle to maintain some kind of morality in a dark and cruel world,” says bassist Carl Davis.

“Somehow being powerful has overcome the desire to help other people. Although I’d like to think we’re on a tipping point of sorts.”

With many years of struggle under their belts, Carl and his comrades have no illusions about the rocky road ahead, but they are also confident. “We wanted to put out a record that represented music that we all grew up listening to,” he says.

“Making sure we had good songs was the most important thing. It doesn’t matter how heavy you are. If you don’t have good songs, you put your own longevity on the line. Great songs will outlast any trend.”

*A War Of Souls And Desires* is out now via iTunes, Spotify and Bandcamp