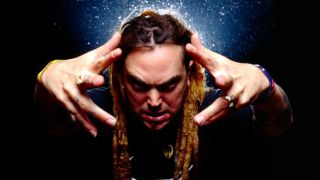 Metal has always been a refuge from which you draw strength: some of our most iconic and powerful moments were birthed from heartbreak, pain, rage and frustration. No one knew that feeling more than Max Cavalera in 1998, as he prepared to embark on a new journey into music.

“It was a really weird time for me,” he tells us today. “It was my first album since leaving Sepultura and the first album after the death of my stepson, Dana [Wells, who was killed in a car accident two years earlier]. The first thing I did after that was work with Deftones, who were friends of Dana. They were there at his funeral – Chino [Moreno, frontman] was actually one of the pallbearers. They invited me to sing the song Headup on Around The Fur, and that is when I came up with the word ‘Soulfly’ [‘Soulfly / Fly high / Soulfly / Fly free’]. It all just started from there. I put the first Soulfly album together pretty quickly; I had demos like Eye For An Eye and No Hope = No Fear, but while we were in the studio I felt that I needed to pay more respects to Dana. So, I thought of Bleed, because that was how we were all feeling. We were all still suffering, still bleeding, from his death.”

Driven by his grief, Max began to compose a song that captured the feelings of his family around him. “It was built on this really cool groove, but it was the lyrics that made it really heavy. Lyrics like ‘See a mother cry, see a brother cry’… that’s the shit that went on in my house. I would walk around and see Gloria [Cavalera, Max’s wife] crying and I would see the kids crying. It was fucking a rough time, man. I had to put it into the song.”

Max was also fuelled by the circumstances involving Dana’s passing. “And then I started thinking about the way that he died,” he tells us. “I wrote ‘What goes around comes around, you better realise, you kill life, you kill life, why, why’ – it was a really pissed-off and angry song, man.”

It was enough to push Bleed into the kind of emotional, urgent territory from which great art is made, but there was still something extra-special to sprinkle on the top of the noise. The addition of Limp Bizkit’s Fred Durst and DJ Lethal would give the song an added hip hop swagger.

“Ross [Robinson, producer] had just worked with Limp Bizkit and he said that he thought they would be perfect to add something to the breakdown bit at the end,” Max continues. “DJ Lethal added all these really cool scratch sounds on top, but Fred just wrote the lyrics right there on the spot. It was electric. I think it’s one of the best things he’s ever done. We were all super-excited, especially as the stuff he was saying was so pissed off. He didn’t know Dana, but he really tapped into the message of the song. It was a sad song to do, but it was really angry, too, so that was exciting. I think that’s why it succeeded so much; that honest anger really spoke to people.”

It was, says Max, a moment where he was able to bring himself back from the brink. “Six months before, I was angry about Dana, angry about Sepultura. I’d been living in a dark room, drinking and taking drugs and I was done with music. My heart was too broken to think about it – I just told everyone to fuck off, and that I just wanted to get drunk. If it wasn’t for Deftones, I don’t know what I would have done. It was tough and hard to make, but it was great catharsis and a great therapy for me.”

With Soulfly heading out on a huge tour to rubber stamp Max’s redemption, Fred Durst would not be the last person to take on Bleed’s rap section. Over time, various metal alumni have filled the role, but it’s a family member that remains Max’s favourite.

“We’ve had everyone do that rap part over the years,” he laughs. “Chino, the (hed)pe guys, Lynn from Snot, Serj from System Of A Down, the guy from Disturbed did it once… but I liked it best when we had Ritchie [Cavalera, Max’s son and now Incite frontman] do it. It sounded real cool with a little kid voice spitting these angry lyrics.”

More than 20 years after its release, it is still a song that both Max and Soulfly fans hold in the highest esteem. “I hadn’t played it for a while and we brought it back on this tour,” he says. “And people went crazy for it. I still love to play it. I love all of my songs, but Bleed is special to me because of what it means, and because it was the song that showed everyone that I could do this on my own… and I include myself in that. If that album had failed, I don’t think I’d be here talking to you now. It was the first step on the journey to where I am now.”