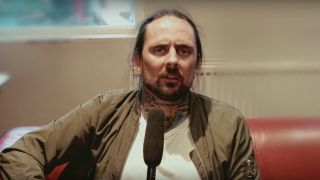 Elitism is everywhere in heavy music, you just need to take one look at Metal Hammer’s Facebook to find that out, and it’s something Thy Art Is Murder have seen first-hand.

Frontman CJ McMahon was originally attracted to the world of heavy music because of its open-armed policy, welcoming in people from all walks of life, but it’s not always smiles and hugs. Describing himself as dressing like a rapper, CJ reveals how often he’s called out for being a poser or a sellout based on his appearance – most recently on social media after posting a picture of his Kanye West trainers.

He also mentions his experiences in Germany and Eastern Europe, with fans questioning his choice of a Notorious BIG tattoo.

Thy Art Is Murder’s new album Dear Desolation is out now via Nuclear Blast.