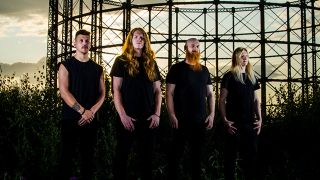 Mancunian groove metallers Prognosis combine prog, sludge, groove and thrash to create a sound that has been described as 'Mastodon playing Carcass' and have drawn further comparisons to the likes of Gojira, Dream Theater and Strapping Young Lad.

The British quartet released their debut full-length album Definition last year and are now unleashing the second single off the record: Downfall. Check out the official video below, premiered exclusively by Metal Hammer.

To celebrate the Northerners' latest tune, we asked Prognosis co-guitarist and vocalist Phil Weller to pick his favourite metal riffs with an odd time signature. If you aren't aware what an odd time signature is, well, it's pretty much what makes prog proggy. Give these tracks a listen and you'll get the gist!

"Mastodon were always going to make the list because of how influential they are in terms of our riff writing. Aqua Dementia's opening riff pinballs between measures of 5/4 with one solo guitar and 9/8 when the rest of the band join.

"I love the dynamic juxtaposition with how it goes from one guitar to everyone thumping you and back again. It's absolutely merciless.

"Much of the rest of the song is in standard time and that's another thing we've drawn inspiration from Mastodon with, combining odd meters with straight forward, punchy 4/4 metal is a key part of our musical template.

"For us as songwriters we've always strived for a balance of chaotic prog and accessibility."

Dream Theater: In The Presence Of My Enemies Part I

"We could all talk at length about the majesty of Dream Theater and the impression their music has left on us all. For Aaron, I know the Train Of Thought album is one of his all time favourites, whilst Danny loves the 24 minute epic Octavarium, if he ever gets picked for Desert Island Disks that’ll be on there.

"For Chris, whose biggest influence as a guitarist is almost definitely John Petrucci, this track is a standout in a brilliant back catalogue.

"It’s the pre-verse riff we’re highlighting here, showing that unorthodox time signature combinations can still be melodic, there’s smoothness to its rhythm too, it’s sophisticated rather than brutal and that’s why we love it so much."

"Rush are masters at odd times and a leftfield approach to songwriting that I've always found inspiring. They particularly use measures of 7/8 brilliantly, chopping off an eighth note off just can give a riff a real snappiness whilst still keeping a groove you can really get into. La Villa Strangiato does this absolutely perfectly; it's one of those riffs that really gets the blood pumping."

It comes in right after a really surreal, eerie interlude about six or seven minutes in and hits you like a train. I'm still not sure what time signature it's actually in – I mean, we can't count most of Meshuggah's stuff – but the first time I heard it my jaw hit the floor.

"The riff is just so powerful and unforgiving, it’s mechanical yet chaotic without ever losing that core groove and it gives me a headache trying to count it, in the best possible way. I've never been hit so hard by a riff before and doubt I ever will again.

Opeth: Beneath The Mire

"Opeth's Ghost Reveries album as a whole is a masterpiece and I think it really typifies that dark yet accessible brutality that much of their career has been founded upon.

"We could pick countless riffs from the album but Beneath The Mire's outro gets the nod because of how normal yet insane it sounds.

"I think it has bars of 9/8 and 15/8 yet it doesn't sound overly weird, which I think is a very important thing. It just sounds so furious and demented and gives a very groovy yet gothic song a sting in the tail for its finale."

"Before we all knew what time signatures were and how obscure you could go with them, we'd all heard and fallen in love with Led Zeppelin's Kashmir.

"John Bonham, a beast behind the kit and definitely someone I feel Aaron channelling in his playing, actually just plays straight four here whilst the guitars and strings play in three.

"Combining that with dark, descending chords gives it such a grand, epic and evil sound and shows that experimenting with different time signatures doesn't necessarily mean you'll alienate a lot of people.

"It's the slightly oddball nature to this song that has made it such a monstrous success and I think it helped pave the way for a lot more progressive flavours in mainstream rock bands."

"Soundgarden are a lot more progressive than a lot of people give them credit for, they've always been a band lumped in with the whole grunge movement but really they're much more than that. Spoonman's intro is in 7/4 and I just love the way it comes in swinging.

"Again it doesn't particularly feel like an odd time, which is testament to the quality of the riff. Those last three notes complete the riff in such a cool way. I’ve tried ripping this riff off but to no avail; it’s a special piece of guitar playing."

"I remember when Christian [guitarist] first heard this riff - the mind melter that kicks in about three to four minutes in - and we were beyond blown away. The interchange between the guitars and keyboards is insanely tight, made even better by the top class production.

"Like with Meshuggah, we couldn't tell you the time signature but that's half the fun, to us Haken are still steeped in a bit of mystery. We just love the way it ricochets all over the place. It's definitely helped inspire us to write more interchanging parts."

"We're not just inspired by metal and Dave Brubeck's approach to jazz is amazing. The way he looks at odd time signatures and breaks them down into logical subdivisions, which creates a really strong rhythmic underbelly to his music, is very ingenuitive.

"We've got a song in 9/8 in the works right now and there's an element of this song to it. The intro riff is brilliant, but it's the way it climaxes with an almost breakdown like piano riff that really makes it special. It's almost djent whilst predating it by about 50 years."

"Perhaps it's a little predictable adding this to the list, but it's just so undeniably cool. It's so slick and develops in such an impressive way, Tool's knack for nuances is second to down and when it comes to basslines, and few are quite as distinctive as this.

"It's moody, carrying the weight of the song's angst with it and represents one of the finest moments by a band we continue to be a massive inspiration for us and in so many different ways."

Prognosis' debut album Definition is out now and available to buy digitally and on CD via their Bandcamp.