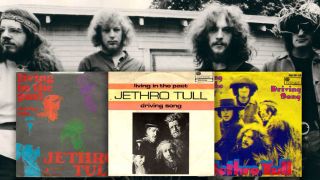 In our new weekly series, Jethro Tull’s Ian Anderson remembers when Living In The Past got to number three in the charts

LIVING IN THE PAST b/w DRIVING SONG

Where did the inspiration for Living In The Past come from?

“I remember being in a Holiday Inn somewhere on the west side of Boston in the summer of ‘69. It was our second US tour. I was in the lobby of the hotel and our manager Terry Ellis said ‘Could you rustle up a three-minute hit single? Something we can release in the UK while we’re away, to keep the pot boiling back home…’ So I said ‘Right, so you want me to pop back to my hotel room and write a hit single?’ and he said ‘Erm… yeah!’ So I went upstairs and fiddled around with some ideas. What I was doing, in a rather naughty way, was to confound Terry and the record company by coming up with something in 5⁄4 timing – the least likely thing to be a hit, because you couldn’t dance to it - and then to give it the completely unhip title Living In The Past. Terry asked me what the song was called and I said ‘Living In The Past’ and he said ‘Could you call it Living In The Future?’ [laughs]”

“It was a top ten hit in the UK but our American label didn’t want to release it in the USA because people wouldn’t get it and it was too complicated. People couldn’t tap their feet to it because it was in 5⁄4. So it remained unreleased in the USA until 1971 until the Living In The Past album was released. That was when it made its debut and, lo and behold, it got into the US top ten as well. They obviously felt they’d shot themselves in the foot, because they could’ve released it back in 1969, but I’m rather glad they didn’t because we needed more time to evolve.”

“Not really. We didn’t want to become a pop band. We went on Top Of The Pops, but we were there under sufferance. The floor manager hated us. Everyone hated us because we weren’t nice, clean boys with neatly pressed stage clothes. We were surly, we didn’t rehearse properly. I felt so embarrassed and humiliated that I couldn’t do anything. When it came to the actual broadcast, then I jumped out of my shell of embarrassment and tried to perform it a bit, by hopelessly overacting and gesticulating wildly. TOTP was unbelievably naff… it was just squirmy and awful, but when Fleetwood Mac got on it, then we got on it, and then The Nice got on it… so this was a victory for blues and progressive rock. Dear old Cliff Richard was at the far end of the studio, warming up on the other stage. I think he was trying to be supportive and trying to dance along with Living In The Past… only to realise that the song was in 5⁄4 and the left foot was where the right foot should be! [laughs] I thought that was the most wonderful moment ever – there was Cliff, the hero of my teenage years, trying to dance to my song.”

“Very much a blessing. It’s a bit cheesy lyrically, to say the least, but as a piece of music it’s cheerful, upbeat, and simple and elegantly constructed. Ultimately, there are only a couple of occasions when a song in 5⁄4 has been in the charts. There was Dave Brubeck’s Take Five, of course… and then for songs in 7⁄8 it’s Dave Brubeck again – Unsquare Dance – and then Tull again with Ring Out Solstice Bells. So I’m up there with the legend Dave Brubeck, who broke new ground in popular jazz, in bringing this music to the public and doing something intricate and quite clever, quite spiky. I feel very privileged to be in that company.”