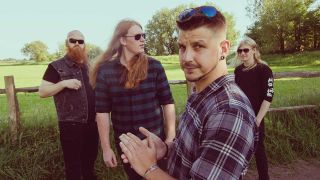 Sounds Like: A thick, meaty stew of sludge, prog, thrash and groove metal, with just a subtle dash of metalcore

“Mighty oaks from little acorns grow” is an old English idiom that has inspired many a creative mind. And it’s a statement that applies wholeheartedly to Prognosis: the young, Manchester-based bruisers whose melodic and groove-laden take on prog metal is already earning them comparisons to such heroes as Gojira, Dream Theater and Mastodon, despite their unassuming origins.

“I think we sounded a little classic rock at the start,” says bassist and frontman Danny Daemon, describing his band’s initial, derivative sound before their evolution into the brutally diverse upstarts fans know them as today.

“It was all about Maiden and stuff like that,” elaborates guitarist and co-vocalist Phil Weller. “This is our first band, so it made sense to start off with something more metalhead, more Iron Maiden: that simple, more bluesy side of things.

“I think when we started writing Drones was when that really changed,” he continues. “That was in a weird time signature and heavier than anything we had ever done. It definitely didn’t sound classic rock.”

Unveiled in August 2016 as Prognosis’s first ever single, Drones marked the beginning of a musical journey that would not hit its culmination until more than two years down the line, finally reaching its complete realisation with the quartet’s debut album, Definition.

“Drones was the turning point,” recalls Phil, “one of those songs that captures what Prognosis are trying to achieve in general, because there are those progressive elements and the structure’s less ‘intro-verse-chorus-verse-chorus’. But it’s also got those really punchy 4/4 sections and that big chorus: for me, there was almost a Muse influence on that. Then you’ve got those weird, slightly off-kilter riffs, and that just inspired the rest of the album.”

The lauded and long-awaited full-length Definition is very much an expansion of the twisted yet hook-filled experimentalism that commenced on Drones. Powerful new songs like High Road, Downfall and The Sycophant continue in their progenitor’s footsteps: they juxtapose wacky time signatures and experimental song structures with such primal pleasures as skull-crushing grooves, unstoppable guitar chops, melodic choruses and an unpredictable interplay between Danny’s grunts and Phil’s clean singing. The end result is a packed album full of nods to sludge, groove metal, prog, metalcore, hard rock and more.

“It’s always been about that balance of impressing people and having that catchy element,” Phil says of his band’s impressively massive soundscape.

Danny adds, “We don’t like to show fear when we’re learning new songs. If you show any sort of hesitation that it might be difficult… we have a thing in Prognosis which is, ‘Cool, we’re doing that then!’”

“There was a good six-month phase where Danny’s catchphrase was ‘There’s no such thing as can’t’,” the guitarist replies. “If someone came up with a section and one of us was struggling, it was never, ‘Oh, let’s make this easier or oversimplify it to help them out.’ There was never any of that.”

And as extreme, progressive eclecticism – pioneered by titans like Meshuggah and Gojira – enters into its most popular era yet, it’s hard to think of a more appropriate time for the guttural punishment of Prognosis to secure a well-deserved breakthrough.

“With Mastodon, Gojira and Devin Townsend, we are aware of that and we have that kind of sound,” Phil concludes. “I think, for us, it’s always been about finding a balance between progressive music – we all like to throw silly time signatures at one another – and the groove element. You want choruses that you can sing along to and stuff where you can pull that ‘riff face’ and bang your head.”