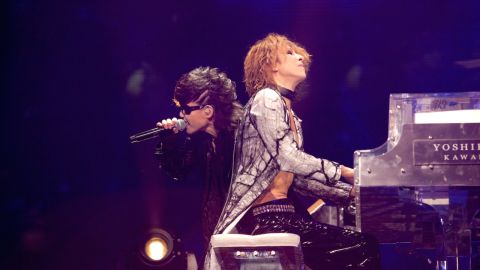 The fact that members of Dir en grey, B'z and Glay, three of Japan's most celebrated rock bands, have flown in to New York for X Japan's debut bow at Madison Square Garden speaks volumes both about the respect in which the Tokyo quintet are held domestically and the importance attached to their appearance at what's arguably the world's most storied concert venue. It has been a long and emotional journey for all concerned.

Towards the end of tonight’s dazzling three hour set, drummer/pianist Yoshiki sits on his drum riser and gives the enrapt crowd, and tens of thousands of X Japan fans across the world watching a live simulcast of the show, a potted history of his band’s career, explaining how he and frontman ToshI met at kindergarten when both were four years old, how – inspired initially by Kiss, Led Zeppelin and David Bowie - they started their first band at age 10 and how they shared a dream of rocking America. “I told my mother one day we would play big shows,” he explains in a quiet voice cracking with emotion. “I think she did not believe me.”

Mrs Hayashi would be proud of her boy tonight, for really, rock shows don’t come too much bigger, more intense, more dramatic or more affecting than this. In terms of box office numbers, this night at Madison Square Garden isn’t the pinnacle of the band’s 30 year career – this, after all, is a group that has sold out the 55,000 capacity Tokyo Dome a record 18 times – and they’re not even the first Japanese band to headline the venue, that honour having already gone to L’Arc-en-Ciel in 2012, but the weight and import of the evening is undeniable. For ten years, Yoshiki and ToshI did not speak – their friendship rent by the vocalist’s decision to join a cult – so their touching embrace at the climax of tonight’s show transcends simple statistics.

And what a show it is. Part rock concert, part symphony, part art installation and pure theatre at at all times, X Japan deliver a live experience that is like no other. At times it’s confusing, at times hilarious, at times overwhelming – not least for the flamboyant Yoshiki, who appears close to tears on more than one occasion. It’s schmaltzy, it’s indulgent and it’s often drenched in pathos, as when slo-mo archive footage of the band’s late guitarist Hide appears on the huge Jumbotron screen behind the quintet, but it engages and captivates throughout. Much has been made of the band’s sense of spectacle, and yes, there are showers of tickertape, and lasers and enough pyro to make Rammstein and Kiss look like masters of understatement, but there’s a rich human core underpinning all the drama which needs no translation.

It’s a wild and varied set, veering from pulsing NIN-style electronica (Drain) to pounding power metal (Silent Jealousy) to mesmeric prog (an enthralling violin/piano face-off between Yoshiki and multi-talented guitarist Sugizo which would make Matt Bellamy blush) to epic Maiden-meets-Guns N’ Roses anthems (Born To Be Free). There are two new songs from a promised 2015 album (the powerful Beneath The Skin and the widescreen Hero, the chorus of which the band teach the crowd karaoke-style in advance), a surreal instrumental take on The Star Spangled Banner and soaring power ballads (Forever Love and the epic, heart-rending Endless Rain) which cause something close to hysteria in the predominantly female, predominantly Japanese audience.

The most gloriously over-the-top moment of this fantastical production sees the barechested, hyperactive Yoshiki launch into an extravagant classical piano solo, then ride his see-through drum kit along an extended walkway on which one could land a jumbo jet, thrashing furiously all the while. As the arena is lit up by flickering red, blue and green LED wristbands - handed out to the audience at the arena doors on arrival - and a stunning string quartet materialise at the back of the stage, the drummer and his kit rise to the skies on an elevated platform, and several thousand jaws simultaneously hit the floor. You don’t get this at Camden Barfly.

The show finally draws to a close with Art Of Life, a multi-part, layered epic that makes November Rain sound like a Ramones song, and a reprise of Forever Love, during which the whole band stroll down their ego ramp throwing red roses to the faithful. They exit with theatrical bows, an audience in tears and screams of ‘We are X! We are X!’ ringing around the arena. Madison Square Garden has hosted many memorable nights, but this grand old room has surely never witnessed anything quite like this. And in truth, neither have we. Bonkers, bewildering and quite, quite brilliant.