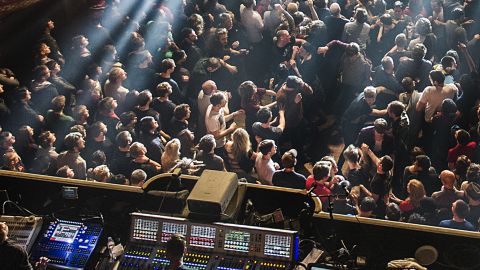 With the swirling lava lamp visuals and preponderance of facial fungus on display, stepping into The Trades Club tonight is like moving through a portal into 1969 just as the exponents of hard psychedelia were splintering off to explore proto-metal in one direction, or easing into the bucolic comedowns that would produce evocative acid folk in the other. That said, it’s a description that befits the Pennine town of Hebden Bridge, the last bastion of bohemia, pretty much any day of the week.

The biggest surprise about Wolf People is not only how loud they are or the fact that they have never previously played this spiritual home-from-home, where the vibe is one of anti-corporate independence (there is real ale in glasses, no need for security, cast members of Emmerdale wandering in and out), but just how much heavier their sound is. What on record is melodically tempered on occasion cracks like thunder when played live, the brute force of the quartet tonight summoning the spirits of Cream, Pink Fairies, Groundhogs and especially obscure proto-metal pioneers Iron Claw. Both frontman Jack Sharp and guitarist Joe Hollick’s playing is revelatory and transportative, the pair trading liquid riffs with jaw-dropping fluidity. And Wolf People are very much all about the riffs as they stretch their songs to twice their usual length in this live setting, before wheeling away unexpectedly down dizzying, kaleidoscopic wormholes with a hungry, lupine ferocity.

But there is more going on here, too. On the dark incantation of Ninth Night the quartet – completed by bassist Dan Davies and drummer Tom Watt – evoke the ancient and insidious mythology of the Hand Of Glory – the stolen hand of a hanged man dipped in wax – while Night Witch contains within it the echoing voices of an England past, rising from the foetid loam to walk the land again. For Wolf People are a progressive folk band at heart, but one in love with volume, fashioning a bombardment of the senses and – perhaps crucially – displaying a love of music that goes well beyond the genre. There’s a swing to Watt’s playing that comes from listening to hip-hop pioneers such as Dilla and Wu Tang Clan that elevates the band high above the usual retrogressive 4⁄4 lumpen clatter and into the realm of the utterly contemporary. So while the aesthetic might be 1969, the sound is 2019.

Wolf People encore tonight with two songs that perfectly showcase their yin and yang: the pastoral Kingfisher, whose glissando-like melody summons images of remote rivers descending through rugged landscapes, and thrusting closer NRR, a high-octane boogie rock ritual that sends the crowd reeling into the night, wide-eyed and drunk on beautiful noise.