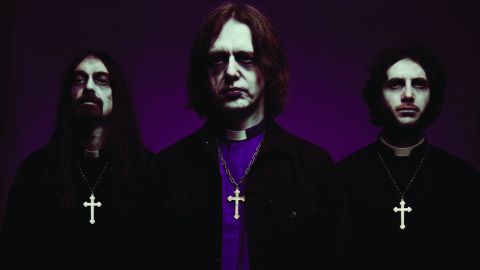 Formed by Electric Wizard exiles Tim Bagshaw and Mark Greening, and fronted by former Cathedral frontman Lee Dorrian – who signed Wizard to his Rise Above label before a semi-public falling out –it would be tempting to see With The Dead as the trio’s revenge upon their former compadre Jus Osborn.

It isn’t. This was intended initially as a reunion of two longtime friends who have been playing music together since 1993 and who complete each other so well that they just couldn’t help showing the world, again, what they’re capable of together. And less than one minute into their debut album’s hyper-charged opener, Crown Of Burning Stars, it’s all here: that simple yet almost tribal drumming style shovelling salt in the wound while keeping that fat tempo going and that crushing, tar-drenched guitar tone splashing blood everywhere.

The comparison with the early Wizard material seems inevitable and not totally out of context, but while, say, Dopethrone was a trip in all senses of the word, With The Dead won’t allow their blinding hatred for everything that is living and breathing to be clouded by six-foot-long bongs. Tighter than they’ve ever been and on a mission, these six songs are so saturated with negativity that it would even scare your most seasoned black metaller, with only Nephthys releasing some steam with its laidback groove.

This being said, WTD seem to care less about coming up with proper songs with choruses than they do about setting up a dark mood where, as repetitive as they are, each riff seems to outweigh its predecessor. Even Lee Dorrian seems to acknowledge that: his vocals were cut later on during a different session and throughout, he sounds more like some apocalyptic preacher spreading his gospel than a proper singer. Just don’t expect With The Dead to make it an easy experience.