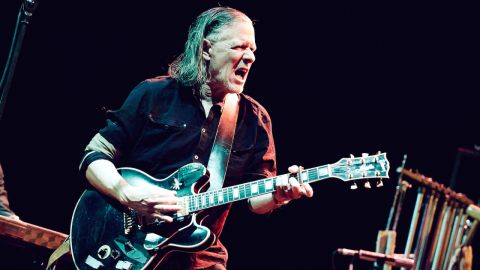 Your first Swans gig is a bit like your first kiss, your first pet or your first gang initiation drive-by. All are rose-tinted memories, but with them comes a foul stain; that girl you kissed broke your heart, that pet shagged everything and had to be put down and the gang you yearned to join set you up, and now you’re doing hard time. Swings and roundabouts, Yin and Yang.

Swans’ biggest headline slot to date sees the Roundhouse not sold out, but pleasantly plump with punters nonetheless. Jas Shaw has just spent half an hour pumping out ambient electronic blips and Okkyung Lee dominates the other support slot, unconventionally shredding on her cello for a good 20 minutes. With her eyes closed.

No words have been uttered on stage thus far and as Swans’ set commences, we’re still a few miles away from human interaction. Thor Harris – what a metal name, right? – emerges and proceeds to whack a gong, on his own, for about ten minutes. With his back turned. The rest of the band saunter on as Harris goes about his business, adding layer upon layer to his percussive pandering and launching into Frankie M. Well, not launching. Meandering, really.

Swans don’t need to hurtle through their back catalogue à la System Of A Down; over the course of 150 minutes, about six or seven tracks are played. That’s it. It’s an immersive treat for the weathered Swans addict, and the sheer esoteric qualities of the gig are its sole downfall – only a die-hard fan is going to appreciate six middle aged men dicking about with the same riff over and over again for an entire evening.

For the initiated, however, it’s a revelation. Michael Gira is on sterling form, warbling and grunting his way through the post-rock trappings of Just A Little Boy (For Chester Burnett) and channelling other songs with flailing arms and unnerving stares. Gira’s intensity is obviously rubbing off on his colleagues; bassist Christopher Pravdica spends the whole gig looking like he’s about to cry.

It’s not just the band who are feeling the strain. Several audience members genuinely cup their ears and wince as yet another droning, buzzsaw riff permeates the air and does some permanent damage on unprotected face holes. This is a gruelling, cathartic experience for both band and crowd – there’s a legion of headbangers having it large on the floor – and nobody can accuse Swans of mellowing with age.

Carving a bloody swathe with climax Black Hole Man, the band follow Phil Puleo – the guy used to drum for Cop Shoot Cop – as he slams his foot on the proverbial brakes. Drums grind to a halt and it’s over. That’s it. We’re safe, and the jack-hammer in our ears is starting to subside.

Bows are taken and rapturous applause envelopes one of the most unique bands on the planet; Gira smiles and promises to ‘kiss every last one’ of his devotees at the merch booth. And that’s the worrying part. Both the queue at the merchandise booth and the level of attendance in general are unfathomably vast for music as inaccessible as Swans. We are a nation of sick, depraved freaks, but if that means Swans can play venues like this… well, being a freak isn’t so bad, really.