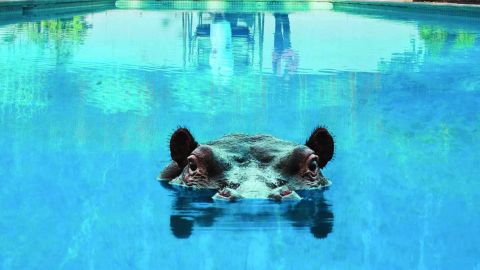 Of late, Russell and Ron Mael have hooked up with arty indie rockers Franz Ferdinand in the supergroup FFS, while their last album as Sparks, 2009’s The Seduction Of Ingmar Bergman, was a weird, convincing, long-form concept piece. They’re back in more accessible mode on their 23rd record, and are on typically catchy, camp and funny form (Missionary Position, Edith Piaf Said It Better Than Me, What The Hell Is It This Time?). There’s a fuzzguitar psych twist to Unaware, the urgent Bummer has a deceptively complicated vocal arrangement, and the brothers are at their most delicately waspish on I Wish You Were Fun. Across a substantial 15-track album, Russell’s unmistakable voice straddles the opera house and the music hall, while Ron’s pianism remains subtly world-class. Sparks’ quirkiness is great, but can also grate: the hip-hop flavoured Giddy Giddy is silly silly, Scandinavian Design outlives its welcome, and When You’re A French Director is a whimsical waltz too far. But it’s nice to know there’s a corner of the musical world where it’s fine to rhyme ‘hippopotamus’ with ‘painting by Hieronymus’, or to write a brilliant song then christen it So Tell Me Mrs Lincoln Aside From That How Was The Play.