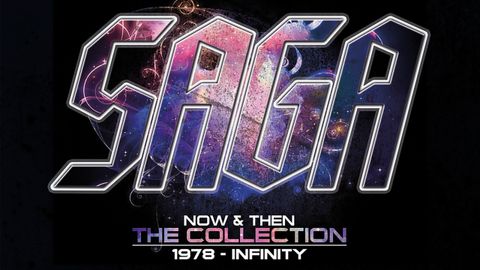 Oh no, not another bloody Saga anthology!” It’s easy to imagine this cry ringing out as Best Of : Now & Then – The Collection hits the racks. A multitude of Saga retrospectives and anthologies already exists, though arguably the most exhaustive example, the two-disc set Remember When: The Very Best Of – was released way back in May 2006. Since then, the enduring Canadian pomp-rockers have released a further five studio records, notwithstanding the almost soap opera-esque departure and return of original vocalist Michael Sadler.

Such unpredictability is, surely, the essence of this most defiantly creative group – an act that flits magpie-like between rock, metal, prog and silky AOR. Each time they take a nasty tumble and we end up writing them off, Saga simply dust themselves down and undergo a period of regeneration. It might take another album or two but they always regain their feet. “Our audience are very good listeners,” Sadler told yours truly in 2014. “They buy the albums that they don’t like but they’ll tell us, ‘It has a couple of nice tunes… so we’ll wait till the next one!’” This surprisingly consistent double-disc set validates the above statement, reminding us that even when they hit the doldrums an ace up their sleeve was never too far away. Complementing predictable sections such as On The Loose, Don’t Be Late (Chapter Two) and You’re Not Alone, Step Inside (voiced by Sadler’s successor, Rob Moratti) withstands scrutiny better than the memory might have suggested. Steamroller and Heaven Can Wait, meanwhile, remind us that there was indeed a semblance of life on Steel Umbrellas and The Pleasure And The Pain. As ever with Saga, the pluses far outweigh the minuses.