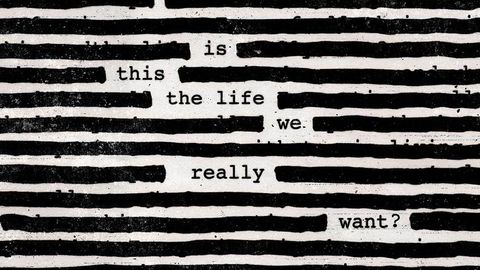 Roger Waters sounds like a man in love. He’s 73 now, and, sure, Is This The Life We Really Want? is freighted with his trademark invective and bilious anger at this messed-up world of ours; timely references to nincompoops becoming president, children drowning in the sea, drone strikes and fat cat bankers are all present and correct. But while A Part Of Me Dies is an acid catalogue of Mankind’s ills, it’s written in the context of a surprisingly beautiful love song. And this from the man who earlier makes the claim that ‘If I were God, I could’ve done a better job.’ The old softie…

Embrace him as an irascible genius and thrill at him venting that lucrative spleen.

Much of what you’ll take from the man’s fourth solo album (not counting his rather flat opera, Ça Ira) will depend on what you bring to it. Is Waters a difficult man, grumpy, outspoken, a control freak with a pretty one-dimensional set list of hang-ups and fetishes? Maybe, but he has his faults too. If you embrace him as an irascible genius, and thrill at the sound of him venting that lucrative spleen through his favoured musical tropes, then this is the album you really want.

Familiar clocks tick in on the opener, When We Were Young, and from here on in you could almost play Roger Waters Bingo, marking your card as you hear the shipping news, telephone operators, old time TV presenters. The lilting acoustic guitar of Déjà Vu is in the long-favoured key that gave us Mother, Pigs On The Wing (Part One) and Wish You Were Here (there’s even a throat-clearing cough at the start of Broken Bones). Picture That has lovely ostinato moments (‘Picture a shithouse with no fucking drains/Picture a leader with no fucking brains’); Smell The Roses is Have A Cigar-funky, and as a drone tears from left speaker to right in Déjà Vu, you’re reminded of the terrifying end of Late Home Tonight, Pt.1 from his last solo album, Amused To Death.

While sharing its dark mood and sentiment, Is This The Life We Really Want? doesn’t quite have the widescreen scale of that 1992 album. The production fabric here is almost – gasp – hip. A fresh broom for an antique room, producer Nigel Godrich brings some of the clean, modern lines of his work with Radiohead and Beck to bear. The band includes drum great Joey Waronker and ever-brilliant guitarist Jonathan Wilson, and the album sounds fantastic.

Together Wait For Her, Oceans Apart and A Part Of Me Died offer a cranky, romantic close to a highly satisfying Roger Waters album. It’s so him.